Book Review: The Jolly Corner and Other Tales by Henry James and N.H. Reeve 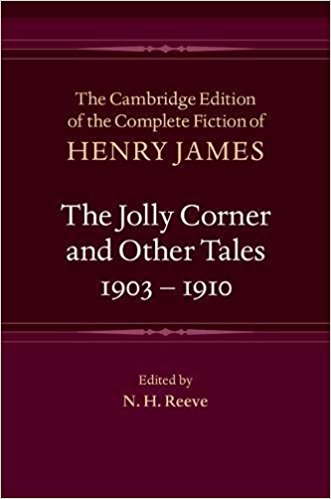 The word perhaps most associated with Henry James is ‘difficult’. James, ‘The Master’, wrote weighty tomes—masterpieces of literature—fraught with long-winded, circumlocutory, or rather uniquely expressive, sentences. He is generally considered to be among the greatest novelists in the English language. James’ books end up on university reading lists, but his stories have made their way into popular entertainment as well: exhibitions, operatic adaptations and countless films. The Cambridge Edition of the Complete Fiction of Henry James aims to provide, for the first time, a full scholarly edition of the novels and tales of this 20th C
entury American writer who still resonates with twenty-first-century readers in the U.S and beyond. With five volumes published already, the CFHJ will amount to thirty-four volumes, comprising twenty-two novels, ten volumes of tales, and two extra volumes for James’s Prefaces and Notebooks. It aims, as is stated in the General Editors’ Preface, for ‘fullness and helpfulness of annotation’, as well as grounding James’s oeuvre in its socio-cultural and historical context, including, especially, publication history and editorial process (p.xiv). The latest volume, edited by N. H. Reeve, is the first volume of tales published as part of this series, and includes James’s last ten tales: ‘The Birth Place’, ‘The Papers’, ‘Fordham Castle’, ‘Julia Bride’, ‘The Jolly Corner’, ‘The Velvet Glove’, ‘Mora Montravers’, ’Crapy Cornelia’, ‘The Bench of Desolation’ and ‘A Round of Visits’.

Extensive critical material operates in this volume to elucidate the relevant socio-historical, cultural and literary background for James’ writings. The volume includes an introduction, bibliography and notes, a textual introduction, which is a succinct overview of the tales’ publication history, followed by a more in-depth chronology of composition, as well as excerpts from the Prefaces and Notebooks. The CFHJ is particularly noted for its long section of textual variants, facilitating research on James’s publishing history. Overall, this material gives the reader a firm grounding in everything that the text omits, and thus a better understanding of the contemporary readers’ reception.

Reeve’s introduction tackles issues that would not necessarily be associated with the version of James that is predominant in Anglo-American cultural memory. By detailing not just the artistic genesis but also the production of the tales, Reeve portrays James as a writer dealing with mundane issues: getting paid, submitting by a deadline, meeting word limits. For James the demand for shorter fiction of around 5,000 words caused ‘endless exasperation’, and Reeve comically points out that there ‘was little prospect […] of his ever keeping [a] story that short’ (pp. xxix, l). Such passages render Reeve’s introduction a pleasurable and fast-paced read, but more importantly, this refreshingly human James is a move away from James, ‘The Master’ in his ‘Ivory Tower’.

One shortcoming of Reeve’s introduction is an apparent inflexibility when it comes to the genesis of certain stories. He details that ‘The Velvet Glove’ is based on James’s friendship with the immensely successful novelist Edith Wharton—certainly a possible interpretation, but he fails to point out the more complex picture of James’s relationship with women’s writing. ‘The Velvet Glove’ could also be inspired by James’s intimate friendship with another novelist, now lesser-known, but then more popular than James:  Constance Fenimore Woolson. James scholar Lyndall Gordon’s biography, A Private Life of Henry James, Two Women & His Art (1998), draws attention to Woolson as a source for James’s artist tales, and Anne Boyd Rioux details, in the latest Woolson biography, Constance Fenimore Woolson: Portrait of a Lady Novelist (2016), his ambivalent response to women writers, vacillating between disdain deeply rooted in a feeling of envy of their popularity and esteem for these likeminded professionals whose friendships proved formative for both his and their literary output [1]. Another connection could be Vernon Lee’s tale ‘Lady Tal’, a loosely veiled parody of Henry James’s Venetian literary circle, over which the two writers fell out or, indeed, Constance Fletcher, a writer from that circle who rivalled him in print and outdid him on the stage. Hence, ‘The Velvet Glove’ is not solely based on James’s literary friendship with Wharton, but probably derives from a longstanding history of James’s friendships with women writers.

Another point worth mentioning is the selection of the tales for this volume. Since the CFHJ is also intended as a set of reference works, it orders James’s tales chronologically according to the first form of book publication. For the reader of a single volume of tales, then, there is a lack of artistic coherence, and for the scholar researching a particular genre of tales, it would be necessary to consult several of the books. The irony here is clear: the CFHJ volumes detail extensively the editorial process, publishing history and financial issues of James’s creative process; yet, these incredibly comprehensive volumes fall victim to their own publishing constraints. The complete edition, James scholar John Carlos Rowe estimates in his review of the first two novels published as part of the CFHJ, will total over $4,125 [2]. So, at about £95 apiece, the handsome burgundy volumes risk becoming luxury items for the coffee table rather than basic tools for the James scholar or doctoral researcher. And with library budgets being what they are, it is understandable that not each and every new volume is ordered as soon as it comes out.

Nonetheless, given the countless merits of these comprehensive editions, the investment will be well worth it. The CFHJ provides the scholar with a comprehensive account of relevant socio-cultural and historical background; it facilitates a variety of avenues for innovative research into the editorial process and publication history; and Reeve’s introduction contributes exemplarily to making James as a writer more approachable.