Book Review: The Gospel According to David Foster Wallace: Boredom and Addiction in an Age of Distraction by Adam S. Miller

Adam S. Miller, The Gospel According to David Foster Wallace: Boredom and Addiction in an Age of Distraction, (London/New York: Bloomsbury, 2016). Xiv+122 $20.99 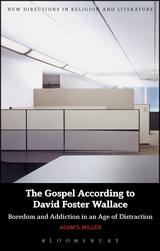 Even for those only casually acquainted with the field of Wallace Studies, the sanctimonious title of this slender volume from Adam S. Miller (Collin College, Texas) – part of Bloomsbury’s ‘New Directions in Religion and Literature’ series – might prompt alarm bells. Indeed, whilst the claim on the back cover – that this is ‘the first book to explore key religious themes’ in the work of Wallace – may be technically true, this is not a subject area that will be unfamiliar to Wallace scholars. However, it is to Miller’s credit that he attempts to sidestep the dangers of hagiography, asserting from the outset that ‘the “Saint Dave” meme doesn’t interest [him]’ (1). Instead – and invoking Wallace’s by-now-infamous aphorism that ‘fiction’s about what it is to be a fucking human being’ – Miller contends that ‘if there is something like a “gospel” according to David Foster Wallace…it teeters on [the] line between the fact of our already being human and the possibility that, despite everything, we still could be’ (2; original emphasis) [1]. It is in emphasising this sense of contingency within Wallace’s writing that Miller makes his most important contribution to the field of Wallace Studies, aligning himself with other recent nuanced appraisals.

Indeed, it is in the preface and first chapter of the book that Miller is at his most insightful. Miller’s thesis expands upon Wallace’s assertion in This is Water (2009) that ‘everybody worships’. However, Miller importantly ‘reads the moment of disappointment as pivotal to the character of worship’, arguing that the ‘one main goal of religion is to induce…disappointment’ (xi, xii). Rather than concerning himself with whether Wallace’s ‘project’ succeeds in providing humanity with an antidote for existential despair or fails by merely highlighting how we can never escape the human impulse to worship, Miller suggests that:

There will be a moment, perhaps quite brief, when all that remains of worship is a pang of raw aiming. This moment when it looks like your worship has failed is the religious moment. This is the revelation. This moment allows the aiming itself to appear. And it is in the aiming itself, not in the object aimed at, that God is most clearly manifest. This is the epiphany. (xii-xiii; original emphasis)

In stressing the ‘aiming’ rather than the ‘object’, Miller argues that Wallace’s fiction is a ‘vaccination’ rather than a cure, prompting an awareness of our contingent humanity rather than aiming for transcendence (2).

The rest of the book is solid if unspectacular, with Miller’s methodology partly to blame. The book is organised into thirty small chapters, each focused on a theme or preoccupation that Miller has identified in Infinite Jest (1996) or The Pale King (2011). Whilst this may be intended to reflect the short chapters of the Biblical Gospels, the result is slightly disorientating, as the flow of the book’s argument is interrupted by the somewhat arbitrary headings (for example: Despair, Distraction, Watching, Assassins, Irony, Masks). There is also very little engagement with existing scholarship, and an over-reliance on identifying and resolving tensions between simplistic binaries; Miller suggests that Wallace wants us to favour the present over the past and future, the (physical) world over the (textual) map, the body over the head. To adhere to this model, however, is to do the complexity of Wallace’s writing a disservice. As Wallace himself pointed out, fiction has ‘limitless possibilities for reach and grasp, for making heads throb heartlike’, for ‘sanctifying…marriages’ rather than enforcing strict binaries or picking sides [2].

Indeed, perhaps the chief problem of the book is that in attempting to identify ‘the gospel’ of David Foster Wallace, Miller runs the risk of reducing Wallace to a single, ‘bigger project’ (111; emphasis added). Moreover, this single project is itself not engaged with on a critical level; Miller seems to be willing to simply accept Wallace’s words as gospel. The greater part of the book offers little new or in-depth analysis of Wallace’s work, instead highlighting overly-familiar tropes and mantras from his writing – the injunction to embrace boredom, the directive to pay attention, the idea that there is truth in clichés – and rephrasing them. In a rare engagement with other scholarship, Miller criticises Hubert Dreyfus and Sean Dorrance Kelly for their reading of The Pale King in All Things Shining (2011), arguing that ‘they steal Wallace’s own critique of Dean and then claim to have discovered it as a critique of Wallace’s project’ (112). This critique might be extended to Miller’s own method: he takes some of the suggestions in Wallace’s writing, and then repackages them as suggestions for how to live. This perhaps begs the question: if this is indeed the ‘gospel according to Wallace’, why not just read Wallace?

Book Review: Siblings: Brothers and Sisters in American History by C. Dallett Hemphill
Book Review: The Good Occupation: American Soldiers and the Hazards of Peace by Susan L. Carruthers
Book Review: Philosophy and Literature in Times of Crisis: Challenging Our Infatuation with Numbers ...
Book Review: Kennedy: A Cultural History of an American Icon by Mark White
Review of "The Market Logics of Contemporary Fiction" by Paul Crosthwaite
Book Review: West of the American Revolution: An Uncommon History of 1776 by Claudio Saunt
Book Review: Connexions: Histories of Race and Sex in North America by Jennifer Brier, Jim Downs and...
Book Review: Mindful America: The Mutual Transformation of Buddhist Meditation and American Culture ...

Iain Williams is a PhD candidate at the University of Edinburgh. His research focuses on David Foster Wallace and how his work engages with notions of sincerity and authenticity. He holds an MA (Hons) in American Studies and an MSc in U.S. Literature, both from Edinburgh. An article on Wallace is forthcoming in the journal Critique: Studies in Contemporary Fiction.
View all posts by Iain Williams →
Tagged  C20, Literature, Wallace studies.
Bookmark the permalink.