Book Review: The FBI in Latin America: The Ecuador Files by Marc Becker

While scholars have devoted considerable attention to CIA activities in Latin America during the Cold War, they have spent less time examining intelligence-gathering before 1947, when the CIA was created. Marc Becker, currently Professor of History at Truman State University and author of several books on Ecuador, argues in The FBI in Latin America that scholars need to study FBI operations in Latin America in the 1940s. This may seem like an unusual claim because the FBI is usually seen as a domestic police force. However, as Becker illustrates, the FBI had a robust presence in Latin America during World War II. President Roosevelt gave the FBI control of political surveillance and, through the Special Intelligence Service, the Bureau placed 700 agents in the region. One would expect these agents to focus on clandestine activities by the Axis Powers, but this was not necessarily the case. The FBI put 45 agents in Ecuador, ‘a country that never was the target of German espionage networks and lacked geopolitical or strategic significance’ (3). Furthermore, by 1943, FBI Director J. Edgar Hoover ‘shifted his entire intelligence apparatus to focus on his primary obsession with communism’ (3).

What Hoover could not have foreseen is that the reports his agents generated provide ‘an important avenue to reconstruct the history of popular movements that contributed to the transformational changes in society’ (5). Thus, Becker charts a hidden history of FBI activities in Ecuador, demonstrates that U.S. political surveillance in Latin America began before the Cold War, proves at least one U.S. organization was far more concerned about Communism than Nazism, and complicates analysis of Roosevelt’s Good Neighbor Policy. FBI activity, after all, ‘made a mockery of the noninterventionist tenets so central to the Good Neighbor policy’ (8). To be sure, initial dispatches often focused on German, Italian, and Japanese threats. However, ‘many former agents deny that they were sent to Latin America to collect information on German or other Axis activities’ (21). Becker argues that U.S. counterespionage was ‘not to protect Ecuador but to advance U.S. economic penetration into the region’ (29). Finally, the FBI’s shift from fascism to a perceived communist threat had a lasting impact on U.S./Latin American relations. The FBI presence, ‘formed the basis for long-term practices that survived the war years, particularly in the form of police assistance programs that targeted political leftists’ (51).

Becker’s analysis of the FBI portrayal of the Ecuadorian left is fascinating. At times, the FBI reports were wildly inaccurate. Chapters 2 illustrates how agents failed to ‘recognize the domestic origins of leftist activism, and its goals to challenge long-standing patterns of economic exploitation and racial discrimination’ (62) and often manifested a ‘partial and superficial understanding’ of Ecuadorian realities (63). However, other reports proved incisive and ‘the level of intimate knowledge in the documents’ (119) suggests FBI cultivation of moles and highlights ‘the extent of penetration of the U.S. security apparatus into Ecuador’ (123). FBI reports documented the role of communists in La Gloriosa, or the Glorious May Revolution, but, at the same time, ‘contained surprisingly little interpretive analysis or indications of underlying ideological agenda’ (152). Furthermore, Becker explores conflicts between branches of the U.S. government. While the FBI tracked communist participation in La Gloriosa, the State Department fretted about possible Nazi influence. For all of Hoover’s staunch anticommunism, ‘diplomats were willing to work with leftists if that would mean a more congenial and stable atmosphere for U.S. business interests’ (155). Interestingly, although Hoover constantly carped about the communist threat, the reports his agents sent back revealed ‘little reason for concern’ and ‘the fact that in the aftermath of La Gloriosa, the Communist Party operated in a constitutional and responsible manner’ (191). In addition, FBI agents paid far more attention to public protest by women than they did to Ricardo Paredes, the leader of the Communist Party!

Becker is judicious in his use of the FBI records and discusses both the strengths and limitations of these records. He carefully explains what the reports illuminate as well as what they occlude and misunderstand. In sum, he demonstrates the richness of an under-utilized body of sources. Intelligence documents can serve a counter-hegemonic purpose and tell scholars as much about social history as about foreign policy. His work complements other studies of the FBI by Max Paul Friedman, Silvia Galvis and Alberto Donadío, and Ronald C. Newton, among others. Furthermore, Becker is unquestionably correct that these records have become a vital resource in a way Hoover never imagined. In 1963, the Ecuadorian military seized truckloads of files, financial records, and other documents from the Partido Comunista del Ecuador (Communist Party of Ecuador). Therefore, ‘the party’s archive may exist deep in the bowels of the military barracks, but if so, it has not emerged for public scrutiny’ (5). Thus, scholars interested in the Ecuadorian left have to seek out other sources. That, in sum, is the strength of the FBI documents. ‘Thanks to those efforts,’ Becker comments, ‘we are left with a better understanding of the thoughts and activities of leftist activists who sought to extend social rights to disenfranchised sectors of society’ (15). 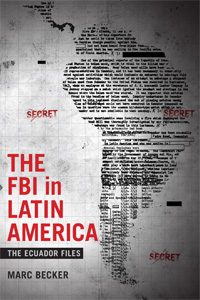 Book Review: State of Recovery: The Quest to Restore American Security after 9/11 by Barry Scott Zel...
Review: The US and Us: American History in Britain in the Twenty-First Century
Book Review: The Myth of Emptiness and the New American Literature of Place by Wendy Harding
Review: SSAWW 2015 Conference: 'Liminal Spaces, Hybrid Lives'
Book Review: Say We Are Nations: Documents of Politics and Protest in Indigenous America Since 1887
Book Review: Desire and Disaster in New Orleans: Tourism, Race, and Historical Memory by Lynnell L. ...
Book Review: Infamous Bodies: Early Black Women’s Celebrity and the Afterlives of Rights by Samantha...
Enlisting Faith: How the Military Chaplaincy Shaped Religion and States in Modern America