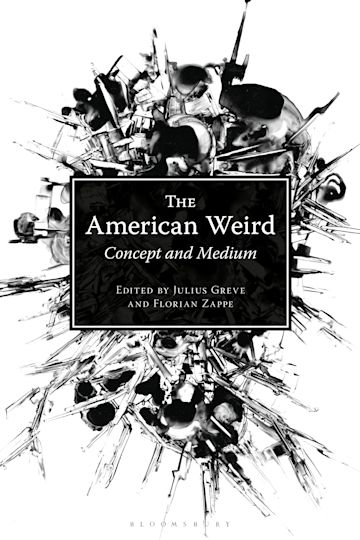 The American Weird is an essay collection divided in two parts: ‘Concept’ and ‘Medium’. Its claim to originality lies in the latter part’s focus on manifestations of the weird in non-literary media running the gamut from film and music to television and videogames. Naturally, however, these cannot be discussed in isolation from the first part’s question of ‘concept’ – of what the weird is.

The question is lingering, and complicated by the ‘Americanness’ the book’s title promises to address – though it is mainly Dan O’Hara’s opening essay that attempts to establish an exception for this national weird and distinguishes it from its British counterpart (varieties of other origin are overlooked).

Even without the nation complication, one can generally read pages upon pages on the weird, yet fail to garner a reasonably safe definition of the term. Consider one of the instances, Johnny Murray’s ‘Oozy Set’, where this volume comes closest to a straightforward definition:

Like the gothic, the weird is concerned with otherness – but an otherness that is unprecedented rather than haunting. Like science fiction, the weird introduces conceptual novelty – but a novelty that is impossible rather than possible. Like fantasy, the weird represents the impossible – but an impossible that evokes horror as much as wonder. Like horror, the weird elicits a powerful, ambivalent frisson – but a frisson with a pronouncedly numinous character. (36)

As this merry-go-round illustrates, circumscribing the weird entails defining the contiguous genera too, and thus all sorts of niceties and possible objections.

For example, Murray distinguishes the weird from science fiction in terms of what is plausible, having earlier (31) grounded the latter in a ‘discourse of possibility’, which leaves the former in the realm of the impossible. Yet, in a recent study [1] Emily Adler locates the modern emergence of the weird in a historical moment when the borders between, precisely, the possible and the impossible, the natural and the supernatural, or indeed the scientific and the charlatanic, were, she argues, permeable.

Genre is also treated by Anne-Maree Wicks who notes the ‘fetishizing of corruption’ by critics of the weird (meaning their tendency to celebrate hybridity) and concludes, somewhat enigmatically perhaps, that: ‘[w]eird fiction is an (im)possible genre […] capable of corruption while incapable of being a pure form outside the law of genre’ (53). Her demandingly Derridean approach will be better comprehended read alongside the ‘Afterword’ by Roger Luckhurst, a veteran in the weird field, who discusses further, inter alia, the deconstructive take on genre, and the idea of a restrictive/permissive ‘law’ of generic purity.

That both Murray and Wicks nevertheless retain ‘genre’ is noteworthy, for, in view of the taxonomic difficulties, the weird has elsewhere attracted every conceivable designation that could replace the term – ‘mode’ being the primary one, itself explainable with reference to, or indeed substitutable by, ‘method’, ‘mood’, ‘manner’, ‘attitude’, ‘atmosphere’, ‘inflection’, ‘tone’. [2] Arguably, this merely sidesteps the problem, for the simple reason that the task of defining a weird mode is not essentially different from that of defining a weird genre.

Wicks’s ‘corruption’, then, is truly the order of the day. At the same time, it is not always clear, say in Maryam Aras’s essay, or Florian Zappe’s, or in Paul Sheehan’s entertaining one on Captain Beefheart – all three hinging on hybridisation, incongruity, ‘the weird’ as ‘montage’ [3] – why such elements do not simply belong to the past forty years’ protean postmodernist aesthetic. It should be noted, nonetheless, that Aras and Zappe, in their respective discussions of Ana Lily Armipour’s and David Barney’s films, give the weird a specifically political tilt, the first viewing it as ‘a strategy of decolonization of pop culture’ (140), the second as a form that subverts those dominant ‘myths’ which (in his Barthesian understanding of the term) naturalise the historical.

In this sense, both of them affirm the proposition that undergirded the millennial resurgence of the weird – namely, that something one would have to call its essence could be wrested from the jaws of the so-called haut weird with its happily reactionary, if not downright poisonous, politics and be turned to more worthy causes.

This brings us nicely to the Marxisant explications. China Miéville was among the first to pave the way for a political reading of the weird by calling it an iteration ‘of the […] problematic […] of crisis-blasted modernity’. [4] The essays by Stephen Shapiro and Tim Lanzendörfer are follow-ups, both viewing the weird as symptomatic of the capitalist system, and its ideology, in crisis. For Shapiro ‘[w]eird tales […] highlight the difficulty that official institutions, and their curation over what are admissible truth statements, have in acknowledging the presence of incongruity within their normative speech’ (64) while for Lanzendörfer (slightly paraphrasing him) the weird effect arises from a failure of ‘what Fredric Jameson has famously called the “symbolic resolution” of real systemic contradictions’ (78).

The top weird hierophant’s hostility to Freud’s ‘puerile symbolism’ [5] may be relevant here. In Lovecraft there is a foolish type (as recognizable, if much less prevalent, as the romantic soul overtaken by its macabre inclinations) dependably appearing in the guise of a scientist, doctor, psychologist – an intellectual, briefly – to explain and rationalise the weird. This doesn’t mean one should grant the (Lovecraftian) weird immunity from political and psychosexual scrutiny – after all, failure to be taken in its own terms is the tragedy, and indeed the comedy, of the numinous outré – but its intermittent reaching for it should count for something.

Eugenie Brinkema’s proposal of an oxymoronic ‘common weirdness’, original in its activation of the term’s latent, etymological relationship to Fate, is arguably indicative of the liabilities of the political approach. In their less inspired moments political readings can be perplexingly reductive, with Lovecraft’s shoggoths, for example, becoming the insurgent proletariat – ‘a once mistreated mass that will, through labor, push to its revolutionary destination’; [6] or Hardt and Negri’s multitude. [7] The problem with the political reading, in short, is that it often renders the weird allegorical, when, as Tzvetan Todorov has shown in his fifty-year-old yet still unsurpassed study (curiously overlooked in discussions of our subject), allegory is the kiss of death to what he calls the fantastic – a genre one could provisionally associate with the weird. [8]

Graham Harman’s withdrawn objects represent perhaps a limit to thorough ‘demystification’, which is what allegory is. Here, however, in his exchange with Daniel Fineman, the respective ‘weirds’ of Dickinson and Lovecraft, are largely sidetracked by an abstract comparison/contrast of Harman’s and Deleuze’s philosophies.

The ambivalence of weirdness’s alleged radical potential is glimpsed in the ‘conspiracy hermeneutic’ Tanya Krzywisnka detects in a weird-themed videogame. Similarly, discussing why ‘weirdness sells’ (218), Fred Frances’s standout piece links the weird/eerie affect to the commodity’s ‘allure’. Frances shuns the step from there to commodity fetishism, which nevertheless seems obvious. In fact, allure being traceable to Harman, a Marxist path to the latter’s ontology is limned – paradoxically, no doubt, given his avowed wish for the destruction of materialism.

The volume contains more typos/mistakes/infelicities than can fairly go unmentioned. I cite the most egregious of the twenty-odd instances I counted: ‘This spectacle scale treated the spectacle of is intended to give generate a sense of vertigo […]’ (238). Such editorial laxity does a disservice to the quality of most of the material.

To conclude, one may say that, in critical discussion of the weird, a host of assorted concerns revolves around two central questions: those of its generic and political definition. The present volume has some interesting insights to offer in both areas.

Watchmen and Hunters: Reading Nostalgia, Repair, and Heroism in American Historical Fiction
“Atomic Ayatollahs”: The ‘Islamic Bomb’ in 1980s American News Media
Golf and Trump’s America
‘Let Us March On’: Lee Friedlander’s Civil Rights Photography and the Revolutionary Politics of Chi...
“Come almost home”: Deconstructing the Asian American Model Minority Myth in Chang-Rae Lee’s A Gestu...
Book Review: Phantoms of a Beleaguered Republic: The Deep State and the Unitary Executive by Stephen...
'The Water-Cure Journal and Herald of Reform': Understanding Hydropathy in Antebellum America
My Archival Adventure as an Academic Researcher across the Atlantic

Alexandros Mantzaris is a freelance writer and translator. He is currently working on a translation of Thomas Hope's 'forgotten' novel Anastasius (1819) into his own (and the narrator's) native Greek.
View all posts by Alexandros Mantzaris →
Tagged  American Literature, Book Review.
Bookmark the permalink.