Book Review: The Absence of America: The London Stage, 1576-1642 by Gavin Hollis

Gavin Hollis The Absence of America: The London Stage, 1576-1642, Oxford: Oxford UP, 2015. [NB Part of the Early Modern Literary Geography series at Oxford.] 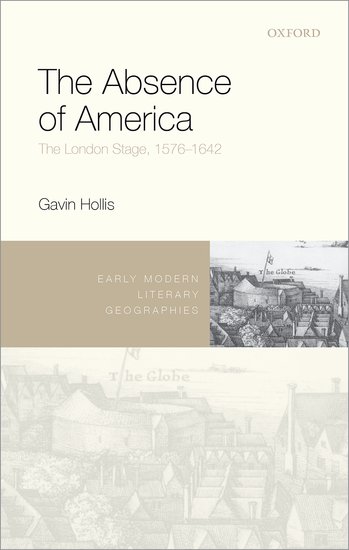 At p.22 in The Absence of America, Gavin Hollis states his text’s title-refiguring credo: “just because America was by and large absent from the early modern stage does not mean that early modern drama… was not informed by America”. Hollis has identified an interesting idea here: sadly, his development of it in Absence is wanting.

In Absence, Hollis discusses the picture of America circulated, he theorizes, by London theatres via “theatergrams” and “theatermemes”. Respectively, these terms comprise elements of character, scene, and situation; and shared allusions, ideas, catchphrases, and the like [3]. More precisely, Hollis discusses and tracks across plays: the ‘meme of the craven adventuring Virginian colonist; the ‘meme of cannibalism; the ‘meme of the displaced Indian; and the theatergrams of European males disguising themselves as Indians [27-9]. These memes and theatergrams in sum, proposes Hollis, constituted the London-theatrical artillery against the Virginia Company and its rhetoric, which the London theatre “mocked and undermined” [see 4 inter alia].

In chapter 1, Hollis argues that assorted plays collapse the “devil”, the Spaniard or “Papist” desperate to acquire vast wealth [35], and the feckless and dissembling “player” (i.e. actor) into a paradigmatically wily, [gold-lustful], and outright criminal Virginian adventurer. In chapter 2, he argues that across certain scenes and aphorisms, Eastward Ho, The Roaring Girl, and The Sea Voyage craft “cannibal-Christians” in homage to a popular story about a Virginian eating his “powdered wife”. His third chapter argues that plays by Shakespeare and Fletcher and Field undermine the Company’s Indian conversion narrative, particularly via parody of George Chapman’s The Memorable Masque, a public panegyric to the Company. Chapter 4 pieces “pieces together the various signifying functions” of Europeans’ “Indian disguises” in Orlando Furioso, The Fatal Marriage, and Philip Massinger’s The City Madam. Finally in his afterword, Hollis surveys post-1642 theatre and the arrival of bona fide Virginian milieus on stage.

With the best will in the world, the reviewer of Absence cannot but immediately take fault. For one thing, Hollis tries to corral scanty references to Virginia into something systematic where — even having approached Absence generously and conscientiously — this reviewer still sees only, simply, scattered references. Numerous plays discussed in the first chapter mention Virginia only once, or inter alia (e.g. “wilde Virginia,/ Black Affricke, or the shaggy Scithia”, from A Woman is a Weather-Cocke: Hollis 57); and subsequent chapters discuss plays vis-à-vis only a clutch of three lines (The Roaring Girl), a passing reference to a “dead Indian” (The Tempest), and/or a single scene (3.3, in The Sea Voyage). Though this is necessarily the nature of ‘memes, and thus somewhat unfair to condemn in the terms of a text about ‘memes, this scantiness is nevertheless dissatisfying in the last analysis.

Even when Hollis discusses plays in detail, his attendant arguments are specious. I think particularly of his argument that in Henry VIII, Thomas Wolsey and a speech about the Field of the Cloth of Gold stand for the Virginia Company and Chapman’s Masque respectively [147-8]; and that in The Roaring Girl, “a grisly reminder… of the powdered wife” lies in what appears pretty generic talk about “maidens” losing “heads” in Virginia [92]. In both cases, at least as discussed and evidenced in Absence, Hollis seems to unduly aggrandize simple similarities. Although creditable enough in its “Iaspero as white Indian” argument, meanwhile, Hollis bases his discussion of The Fatal Marriage’s hero at least as much on conjecture (sample phraseology: “Surely this would be…? It is almost as if he has forgotten…”) as on analysis of what Iaspero actually says or does [190-4].

Absence’s overarching problem, from which derive these problems of scantiness and speciousness, might be stated thus: although Hollis collates a critically commendable tranche of Virginia ‘memes in lesser-known Renaissance plays, his attempts to read texts more deeply, and to read them as coded attacks on the Virginia Company, do not compel. Tellingly, I think, his fourth chapter essentially abandons the “theatres vs. Virginia Company” framework that governs Absence up until then. A book-length framework demands something Absence does not deliver: Absence’s chapters would work better as discrete articles, with more particularized theoretical frameworks.

Despite these criticisms, Hollis does make creditable arguments in Absence (albeit, again, not uncompromised ones). Although he does not explain precisely how “Massinger uses Virginia as an index of characters’ moral standing” [113], for example, Hollis’ discussion of The City Madam’s Luke as cannibal-Christian certainly has a compelling ring to it. His notion that Bartholomew Fair compares play-going to investing in the Company [62-4], meanwhile, is an extrapolation too far from a genuinely compelling reading of the Fair as a “New World experience” overlaid upon London [62, 65]. Convincing too are Hollis’ extended reading of and attendant arguments about The Sea Voyage, and his advancing of The City Madam as a response to the 1622 Good Friday attacks in Virginia [208].

Overall, The Absence of America has commendable theoretical daring, and brings together early modern ‘memes of the Virginia colony in thorough and useful fashion for future scholars, but is unsatisfying in the last analysis. The speciousness here, the scantiness there, and throughout the grinding sound of case studies being forced into an overarching theoretical conceit about the Virginia Company: all problems of a book which would have better been so many shorter, more specialized articles.

Pat Massey is a first year PhD at the University of Manchester, in English and American Studies. His project title: 'New Orleans Exceptionalism in the Cultural Response to Hurricane Katrina'. His supervisors: Drs Natalie Zacek and Douglas Field. His handle: @MassalinesSt.
View all posts by Patrick Massey →
Tagged  Early America, Literature, Transatlantic.
Bookmark the permalink.