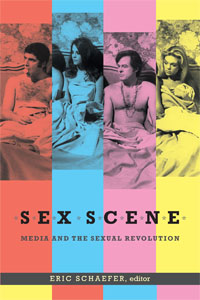 Citing the work of Alan Petigny, and also that of contemporary sexologists such as Alfred Kinsey, editor Eric Schaefer claims that ‘what constituted the sexual revolution was not only a change in manners and morals; that had already been occurring discretely in minds and bedrooms across the nation.  It was the fact that sex was no longer a private matter that took place behind closed doors’. (3)  Featuring fifteen chapters by sixteen different authors, Sex Scene seeks to argue that ‘what we have come to understand as the sexual revolution of the late 1960s and early 1970s was actually a media revolution’. (Rear Cover)

The collection represents an important step in this direction, but leaves a number of avenues open for exploration by future scholars.  For example, despite Schaefer defining the media as incorporating ‘film and television, recorded sound and radio, [and] publishing’, more than half of the book deals almost exclusively with film, while the news media, advertising, or the underground press receive no attention. (4)  Indeed, only one chapter, Raymond J. Haberski Jr.’s ‘Critics and the Sex Scene’, includes any real discussion of how the millions of Americans who didn’t line up to see films like I am Curious (Yellow) would have known of their existence. (383-406)  In comparison to other works in the field, such as Roger Streitmatter’s Sex Sells for example, the collection therefore has a disproportionate focus on cinematic depictions of sex and nudity.  A chapter that explored how the news media increasingly popularised and legitimised sex as a topic of discussion in this period would have helped readers to understand the context in which the media discussed elsewhere were being produced. 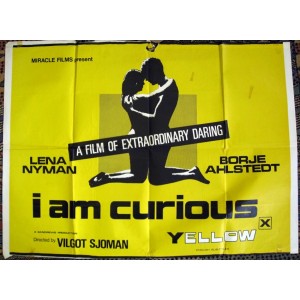 Elana Levine’s chapter on American television in the 1970s is a good step in this direction. Noting how the use of female heroines enabled TV networks to co-opt women’s liberation and sexual revolution within ‘patriarchal and heteronormative perspectives’, Levine demonstrates the shortcomings of sexual imagery in popular media. (86)  Indeed, Levine argues that a study of American television can shed light on how ‘the sexual revolution moved from being an emergent culture beginning to disrupt the status quo, to one that becomes incorporated into that very status quo, losing much of its revolutionary potential in the process but nonetheless bringing small increments of change to our ways of thinking, feeling, and seeing sex’. (100)  Perhaps most importantly, Levine reminds us that, ‘counting only those cultural products that seem “revolutionary” misses a key part of the sexual revolution’s permeation of American culture during this period’. (82)

Linda Williams’ examination of Jane Fonda and cinematic depictions of female orgasm also demonstrates the utility of a more critical approach to the sexual revolution and provides readers with much needed background on the emerging science of sexology and its intersection with American media.  Citing feminist and cultural historian Lynne Segal, who argued that the sexual revolution ‘was going to have to mean something more than “the freedom to get laid”’, Williams shows how Fonda’s ‘critique of phallocentric sex’ was fostered by the work of sexologists such as Virginia Johnson, William Masters, and Alfred Kinsey. (55, 60)  While Williams remains a little quiet on the ways in which this work may have been absorbed (or rejected) by audiences prior to watching Fonda’s films – another reason why a chapter on news media would have been most welcome – the chapter is able to  link media depictions of sex to the wider context in which they were formed. 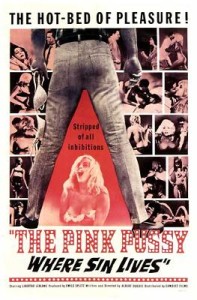 Elsewhere, however, the book tantalizes the reader by leaving some of its more innovative and exciting questions unanswered.  Titling his introduction ‘Sex Seen’, for example, Schaefer mentions how bright neon street advertisements for films such as The Pink Pussy in 1964 brought sex into public spaces and, importantly, into the social sphere of “respectable” citizens who would not have dreamt of viewing the titles explored elsewhere in the collection.  However, while essays by Christie Milliken, Kevin Heffernan, and Leigh Ann Wheeler examine censorship battles over depictions of sex in great detail, neither Schaefer’s introduction, nor the collection as a whole, leaves the reader with a full understanding of why sex ‘was on display in a way that was unprecedented in American history’. (4)

While it is unfortunate that some of the most commonly viewed public media – newspapers, magazines, and public advertising – are so conspicuously absent from the collection, there are a number of chapters that provide unique insights into greatly underexplored media.  Jacob Smith’s exploration of erotic phonograph records and Eithne Johnson’s examination of the “Sexarama” (a multimedia sex education tool), for example, are groundbreaking essays that explore the sexual revolution and its impact in truly unique ways.  In addition, Jeffrey Sconce’s examination of Satanism’s association with erotica, as well as Joseph Lam Duong’s investigation of the sexual freedom movement’s relationship with pornography, provide the reader with interesting new angles from which to explore much covered topics.

Certainly, then, the collection is much greater than the sum of its parts.  However, while the book should be congratulated for its often innovative approach – and despite featuring an entire section entitled ‘Media at the Margins’ – the absence of material challenging the white, heteronormative bias common to popular readings of the sexual revolution is problematic.  Indeed, only one chapter – Jeffrey Escoffier’s examination of hardcore male gay pornography – deals with media representations of same sex relationships, while discussion of men and women of colour is confined to Christie Milliken’s brief discussion of blaxploitation movies.  Consequently, while the collection provides readers with an innovative and exciting approach to marginal media forms, future scholarship needs to interrogate how and why certain sexual relationships remained at the margins of media representation.

Review: Historical Fiction in the United States since 2000
Book Review: The Rise of Common-Sense Conservatism: The American Right and the Reinvention of the Sc...
Review: BrANCA Reading Group Session, 'Forgotten Sensations' and Sensationalism
Book Review: The Jolly Corner and Other Tales by Henry James and N.H. Reeve
Review: 'Border Crossings: Translation, Migration, and Gender in the Americas, the Transatlantic, an...
Book Review: Why the Right Went Wrong: Conservatism – From Goldwater to the Tea Party and Beyond by ...
Event Review: The Maple Leaf and Eagle Conference 2022
BAAS PG Conference 2017: Keynote Review

Dr Mark Walmsley is an independent scholar and a member of the Academic Advisory Panel to Schools OUT UK. He is interested in the process of news construction and its impact on the writing and understanding of history. His PhD focused on its specific influence on the civil rights and homophile movements of the 1960s. Part of this work won the BAAS Ambassador’s Postgraduate Award for 2012 and was published in the Journal of American Studies.
View all posts by Mark Walmsley →
Tagged  C20, C21, Gender and Sexuality, Masculinity, Media, Popular Culture.
Bookmark the permalink.