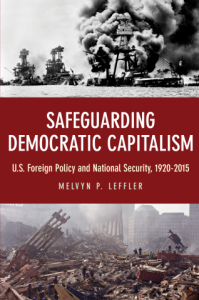 Safeguarding Democratic Capitalism presents a selection of work from one of the world’s leading scholars of US foreign relations. Together these essays offer an elegant and engagingly written survey of twentieth century US foreign policy and national security debates.

Melvyn P. Leffler’s book spans the period from the end of World War I to the Global War on Terror, examining how national security strategy is formulated. Leffler explores the issues that concern policymakers during times of national crisis and seeks to understand how these individuals perceived the nation’s ‘vital security interests’ (x).This book also charts Leffler’s intellectual development as a scholar. The introduction offers an overview of his career, and each chapter is prefaced by his reflections on the questions that prompted his research and notes on his source material. Leffler writes with refreshing honesty about his career and his approach to studying history, making Safeguarding Democratic Capitalisman especially valuable read for graduate students and early career scholars seeking to understand the research process of one of the field’s most eminent figures.

Understanding the process behind policymaking, particularly the thought process of key decisionmakers, is a central concern in Leffler’s book. In the introduction to Chapter One Leffler explains how his early research on war debt in the wake of World War I helped him to understand the complex nature of policymaking and the range of factors that influence key decisions (29). His appreciation of the complexity of decision making translates into a sincere empathy for individuals faced with making these difficult choices, both Americans and their opponents. His discussion of the Soviet Union’s position during the early years of the Cold War offers an especially strong example of his ability to empathise with US policymakers while also critiquing their failure to appreciate the USSR’s ‘wartime experiences and sacrifices’ (162).

How policymakers grapple with understanding what the United States’ role on the international stage should be is another of Leffler’s recurring themes. Here, the chronological span of the collection is particularly valuable, as readers gain an insight into how policymakers understood their nation’s place in the world throughout the twentieth century. Leffler stresses that perception of threat is a crucial component in understanding how policymakers make decisions. Chapter Four, ‘The American Conception of National Security and the Beginnings of the Cold War, 1945-48’, which Leffler describes as ‘the most important article of [his] career’ (15) explores this issue during the early Cold War. In order to understand why national security strategies were crafted in the way they were, Leffler argues, we must understand what it was that policymakers perceived to be ‘endangered’ and why (118). Rather than fear of an imminent attack from the USSR, Leffler argues that policymakers viewed the potential spread of communism as their most pressing concern, one which had the potential to challenge the ‘geopolitical balance of power in Europe and Asia’ (123). Leffler continues to examine policymakers’ decision making through this prism of threat perception in the book’s remaining chapters, particularly in his discussions of the Truman Doctrine and aid to Turkey (Chapter Five), fears of Soviet failure to adhere to diplomatic agreements (Chapter Six) and the role of 9/11 in shaping perception of US foreign policy (Chapter Nine).

Throughout, Leffler maintains that strategy is formed by considering ones’ goals, assessing priorities, and linking means to ends (304). He argues in Chapter Nine that, following the attacks of 9/11, the government’s foreign policy goals did not alter, but that “the calculation of threat and the means to achieve goals” changed significantly (282). By offering numerous examples, Leffler deftly disproves claims that ‘preemptive military action’, as seen in the wake of 9/11, was a new phenomenon (285). Rather, he demonstrates that it was a feature of US foreign policy throughout the twentieth century, reminding readers of the importance of ‘remembering the past when contemplating the future’ (218). The nature of this work means that later chapters such as this one engage most closely with contemporary historiographical debates. Indeed, one criticism of the volume is that Leffler could have devoted more space in his introductory comments to responding to the criticisms each article received, given that the articles were not amended prior to their republication in this volume.

Finally, Leffler engages with the notion of history and memory at several key points. In Chapter Eight he explores how ‘memory and values’ shape the behaviour of policymakers, as well as previously discussed factors like threat perception and awareness of America’s place in the world (244).  His work therefore engages not only with the lively historiographical debates surrounding national security and grand strategy, but also ties in with blossoming scholarship on the connections between history and memory.

Overall, Leffler succeeds in his efforts to ‘infuse empathy and complexity’ in his writing, and the resultant collection is analytically sharp while consistently treating its characters with respect and fairness. Though the nature of this volume means some of the earlier essays have been superseded by newer scholarship, the collection nevertheless provides a valuable starting point for individuals seeking to understand the process of writing and implementing American foreign policy strategies in the years following World War I.