Book Review: Richard Ford and the Ends of Realism by Ian McGuire

Ian McGuire, Richard Ford and the Ends of Realism. (University of Iowa Press, 2015) 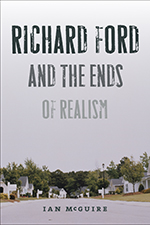 Richard Ford is a best-selling author, a writer of critically acclaimed novels, a winner of a Pulitzer Prize for fiction, and is generally held in high regard by his contemporaries. It is puzzling, then, that the body of literary criticism on his work is remarkably thin. The subject of very limited academic analysis, what little criticism there is tends to concentrate on trying to position him as a Southern writer despite his own protestations to the contrary – see Ford’s inclusion in books by Matthew Guinn: After Southern Modernism (1991); and Fred Hobson: The Southern Writer in the Postmodern World (1991) – or discusses the representations of masculinity in his writing such as in Josep Armengol’s Richard Ford and the Fiction of Masculinities (2010). Considering the wide variety of issues Ford engages with over the course of his fiction writing, it becomes even more surprising that until now critics have sought to limit themselves to these familiar topics, rarely daring to engage with him beyond these boundaries.

With the publication of the widely praised Canada in 2012 and the unexpected return to the character of Frank Bascombe in 2014’s Let Me Be Frank With You, Ford himself has been highly active of late, doing regular public readings, interviews and appearances. However, scholarly analysis of Ford’s work has remained scarce, with just a handful of book-length critiques published, and the odd reference to his novels and short stories in studies on more general topics. Indeed, it is fair to say that there is no specific Ford expert that one can reasonably point to as an authority on his work, or as having positioned themselves as a leader in the field of Ford studies – such as it is. It is with some relief then, and not a little excitement, that we approach Ian McGuire’s Richard Ford and the Ends of Realism. Here is a thoughtful and thorough study of Ford that seeks to move past the well-trodden ground of ‘Ford as Southern writer’ or ‘Ford as chronicler of the suburbs’ and attempts to engage with him as a fundamentally realist writer. At just 97 pages, not including notes, this is a quick and lively read, but the short page count belies the serious analysis present.

In the introductory chapter, McGuire positions Ford as a pragmatic realist as distinct from other realist writers like Raymond Carver, Anne Beattie, and Tobias Wolff that Ford has on occasion been lumped in with, noting that ‘Ford practices…a form of pragmatic realism in which the traditional realist claims to represent or grasp reality are maintained and indeed developed but are also carefully tempered by a pragmatic, antifoundationalist awareness that any reality that the realist grasps is only ever temporary and that any act of grasping is only ever partial’ (xvii). Drawing on Ford’s obvious deference to Emerson, McGuire suggests that Ford’s approach to realism is one that accepts ‘mystery’ as an intrinsic part of it, with the result that his novels and short stories do not actually attain, nor do they seek to attain, anything approaching a final truth.

The book discusses all of Ford’s work up to Canada in chronological order which allows McGuire to trace the development of Ford’s realism. It also allows for the discussion of seemingly contradictory approaches, most notably in the gritty short stories of Rock Springs (1987) and the more philosophical meanderings of The Sportswriter (1986). Both were published within just a year of each other but display pointedly different writing styles, with Rock Springs written in a style that Frank Bascombe and Ford dismiss throughout The Sportswriter. McGuire suggests that this is an indication of Ford’s maturation as a writer, a moving away from the poorly disguised attempts of his earlier work to parrot the minimalism of writers such as Hemingway. Perhaps the strongest section of the book, in a series of already strong chapters, is that on Independence Day (1995) which is widely accepted as Ford’s finest work. Here McGuire traces the development of Ford’s realism in parallel with Frank Bascombe’s evolving theories of what it is to be American. Although Ford claims that Bascombe was never intended to be an ‘everyman’ type of character or symbolic of a particularly American existence, he nonetheless becomes a conduit through which Ford examines the intricacies and contradictions of American identity. As McGuire points out, throughout Independence Day Frank is caught in ‘perhaps the classic, American dilemma of how to detach oneself from convention (to become free) without in the process becoming merely alienated or self-absorbed – the paradox of how, in the broadest terms, to create an independent nation’ (32).

If there is a weak spot in the book, it is perhaps the short chapter dedicated to Canada which also serves as the book’s conclusion. A novel of such richness that is so distinct from the Bascombe books surely deserves slightly more analysis than is afforded it here. Evidently, Let Me Be Frank With You was published too late for inclusion in this study, but if anything this creates the opportunity for Ford readers to move beyond the standard reading of the character of Frank Bascombe. Overall this is a much-needed addition to the body of Ford criticism, and McGuire has done well to establish new grounds for reading and analysing the fiction of Richard Ford.

Jenny is a PhD student in the School of English, Trinity College Dublin working on representations of the masculinity crisis in contemporary American fiction. Jenny is a Postgraduate rep for the IAAS (www.iaas.ie) and can be found online at https://tcd.academia.edu/JenniferDaly or (worryingly often) on Twitter @jennybdaly.
View all posts by Jennifer Daly →
Tagged  Literature.
Bookmark the permalink.