Book Review: Rethinking American Emancipation: Legacies of Slavery and the Quest for Black Freedom edited by William A. Link and James J. Broomall 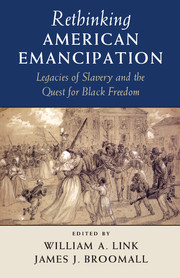 It is axiomatic that the American Civil War was intimately connected with the demise of American slavery. Certainly, the circumstances and events of the war led to the Emancipation Proclamation and later the Thirteenth Amendment, ending chattel slavery in the United States. This relationship between the Civil War and emancipation has led to a general view of the war as a triumph for freedom and a redemptive rebirth of the American nation. Yet several decades of historical writing have sought to complicate this straightforward story of a dichotomous shift from slavery to freedom in 1865. This scholarship has not only queried what forces drove emancipation but has also interrogated the contested meaning of freedom and slavery’s legacies after the Thirteenth Amendment. Rethinking American Emancipation brings together a stellar cast of scholars to both reflect on this rich historiography and to provide new insights on the diverse and complex road to freedom. In doing so, William A. Link and James J. Broomall have produced a wide-ranging collection of essays that simultaneously answer and ask important questions about emancipation and its repercussions.

There are nine essays in Rethinking American Emancipation, which is split thematically and chronologically into three sections. The first section, ‘Claiming Emancipation’, contemplates the multidirectional nature of the struggle over freedom during the war. Yael A. Sternhell’s essay explores the personal acts of self-liberation that slaves engaged in and places it within the wider context of spatial flux within the Confederacy, whereas Gregory P. Downs’ essay stresses the importance of the state in realizing and recognizing these claims to freedom. Slaves ‘ran to soldiers not just because they had guns but also because they could provide the recognition that freedom demanded’ (Downs, 60). Building on Downs’ emphasis on federal force, William A. Blair’s chapter focuses on military interference in elections as an important, though previously overlooked, factor that contributed to the Thirteenth Amendment.

The remainder of the book moves past the Civil War into the Reconstruction period and beyond. Section two, ‘Contesting Emancipation’, interrogates some of the debates and conflicts over the meaning of emancipation. Allison Fredette’s contribution compares and contrasts the divorce court records of Kentucky and Virginia in order to gauge the effect of emancipation on white marriages. Taking a similar comparative approach, Chapter 5 by Carole Emberton explores the ways in which people reacted to two violent events that took place in Easter 1873 – the Colfax Massacre in Louisiana and the death of Major General Edward Canby as part of the Modoc War on the California-Oregon border. In doing so, Emberton makes important connections between the ways in which ‘White supremacist violence rolled back the tide of freedom in the South and rolled in the tide of federal authority in the West’ (Emberton, 141). Justin Behrend’s chapter uses black fears surrounding reenslavement, as expressed in Concordia Parish, Louisiana, during 1876, as a lens through which to glimpse both their dark memories of slavery and their deep investment in electoral politics.

The theme of memory comes more to the fore in the third ‘Remembering Emancipation’ section. Two essays contributed by William Link and Paul Ortiz explore the construction of narratives of freedom and slavery at the local and international levels, respectively. Link focuses closely on Atlanta, a pivotal hub in the New South, whereas Ortiz looks at African American efforts to place their own liberation in a global context. Ortiz outlines a dynamic vision, which he terms ‘emancipatory internationalism’, that rested on the idea that American democracy was linked with ‘the self-determination of workers in Latin America, the Caribbean, and Africa’ (Ortiz, 189). John Stauffer, in Chapter 9, delineates the divergent ways in which abolitionists and emancipationists have been portrayed since the late nineteenth century. Although both groups opposed slavery, abolitionists sought an immediate end to the institution and advocated racial equality whereas emancipationists sought legal solutions to the problem of slavery, solutions that were sometimes shaped by a scepticism of racial equality. During the twentieth century the former found themselves caricatured as dangerous fanatics but the latter were celebrated as astute political realists. Stauffer’s chapter not only suggests that this distinction has been overstated but, more importantly, that this uncoupling of the two groups has shaped how people have conceived, and continue to conceive of, black freedom.

In her Epilogue, Laura F. Edwards neatly summarizes this book’s overarching conception of emancipation ‘as a dynamic, highly contingent process that involved both individuals and the state’ (Edwards, 255). Edwards is right, and Link and Broomall should be commended for bringing together nine essays that are uniformly insightful. I especially liked the way in which Rethinking American Emancipation not only encapsulates the complexity of the journey from slavery to freedom but also the ways in which some of the essays problematise viewing this transition in an uncritically positive light. As Behrend’s chapter suggests, the possibility that some former slaves feared reenslavement points to the uneven and perhaps even uncertain process of emancipation. Moreover, as Downs and Blair’s essays attest, there was a coercive element in securing black freedom, while Emberton’s arguments point to some clear connections between American emancipation and American imperialism. This book’s adeptness at outlining the duality between emancipation as a tremendous achievement and emancipation as a journey riven with problems and setbacks is its greatest strength. Rethinking American Emancipation and its important observations deserve a wide audience for, as its final words state, ‘the process of emancipation is the story of America’ (Edwards, 266).

Patrick Doyle is a historian of nineteenth-century America with a specific interest in the Civil War era. He joined Royal Holloway in September 2014 as Lecturer in Modern American History and is currently working on a monograph which explores the interconnected issues of family, community and loyalty in Confederate South Carolina.
View all posts by Patrick Doyle →
Tagged  Black History, Race, Slavery.
Bookmark the permalink.