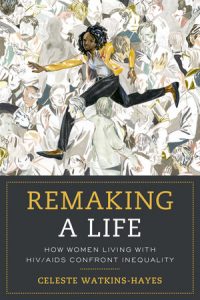 Celeste Watkins-Hayes’ Remaking a Life centres on the creation, expansion, and maintenance of the HIV/AIDS safety net in the United States. The book predominately focuses on women of colour in Chicago, highlighting their stories as case studies for the successes of the HIV/AIDS safety net. The HIV/AIDS safety net refers to financial aid, protective government policies, and healthcare resources, alongside social and community organisations that support people living with HIV/AIDS to manage their illness. Sociologist Watkins-Hayes provides a nuanced analysis of the opportunities that the safety net offers these women whilst simultaneously highlighting the impact of systemic, interpersonal, and intrapersonal racism on their ability to accept and thrive using these resources. Using an intersectional Black feminist theoretical framework, Watkins-Hayes reminds readers that the HIV/AIDS epidemic cannot and will not end without the inclusion and leadership of Black women living with HIV/AIDS (WLWHA).

The research focuses on five women of differing races, classes and/or sexual orientation as ‘central storytellers’, alongside over 100 other interviewees (26). It details how these women engaged in a transformative project within the HIV/AIDS safety net and various framing institutions. Watkins-Hayes explains through statistics, diagrams, interviews, and case studies the central tenets of the transformative project as women move between dying from, living with, and thriving despite an HIV/AIDS diagnosis (11). Watkins-Hayes emphasises that dying from is a result of ‘injuries of inequality’ such as poverty, racism, misogyny, homophobia etc. that negatively affect women’s lives (1). She argues that a successful transformative project requires more than a cognitive shift, a desire to change. Watkins-Hayes highlights that this cognitive shift must be maintained by providing new coping strategies, tools and support, in this case through the HIV/AIDS safety net and positive framing institutions, which enable women to sustain their transformative project as they move from living with to thriving despite. 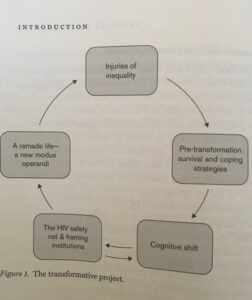 The book briefly traces the history of the HIV/AIDS epidemic and HIV/AIDS activism as white, gay and male-dominated, before shifting to discuss the realities of the epidemic from the early 1980s for women of colour. However, the majority of the book focuses on contemporary experiences based on over a decade of research undertaken from 2005-2017 (260).  Despite early framing as a gay white male disease, Watkins-Hayes highlights that HIV/AIDS disproportionately impacts poor Black and brown communities and transgender women.

Since the beginning of the epidemic, women of colour, particularly Black women, have been important activists, campaigners, and shapers of the HIV/AIDS safety net. By highlighting organisations and policy on HIV/AIDS created by well-known Black female activists such as Dazon Dixon Diallo and Debra Fraser-Howze, Watkins-Hayes positions Black WLWA as experts in dealing with this public health issue. Also, by including the stories of lesser known Black WLWHA activists working on a smaller scale within their own communities, Watkins-Hayes emphasizes that all women have the capacity to undertake a transformative project. In the 1980s when responses to HIV/AIDS epidemic, either community-driven or government-driven, refused to acknowledge that ‘AIDS looked different in women’, WLWHA created their own organizations to centre women, and women of colour, within the HIV/AIDS safety net (92).

Situated within a Black feminist framework, Watkins-Hayes positions her analysis alongside earlier work by scholars such as Cathy Cohen, Patricia Hill Collins, and Kimberlé Crenshaw. Theoretical grounding based in Crenshaw’s intersectional approach ‘reveals interlocking power dynamics’ and how they are ‘shaped by our societal approach to sameness (embrace) and difference (hostility)’ (22). Watkins-Hayes uses this intersectional approach to highlight and emphasize the inequalities and obstacles faced by poor women of colour living with HIV/AIDS that are largely absent from white women’s or gay men’s experience. Similarly, Watkins-Hayes incorporates Collins theory of ‘controlling images,’ to analyse framing institutions such as support groups, media, prison, or medical services. Using this theory, she analyses whether the framing institutions provide positive and affirming frameworks for women or rely on negative stereotypes that ‘flatten the humanity’ of WLWHA (243).

Watkins-Hayes shows readers how and why the HIV/AIDS safety net was and still is essential in the continuing battle against this public health crisis. Despite the flaws in the system, the safety net successfully incorporates social, environmental, political, and personal approaches alongside medical or biological approaches. She proves throughout that a medicalized model of care alone will not lead to the desired outcome of ‘Undetectable=Untransmittable’, otherwise known as the U=U, campaign promoted by the US Conference on HIV/AIDS in 2017 (178-9). Watkins-Hayes argues that the safety net should continue to receive federal funding and also provide a ‘blueprint’ for effectively addressing other public health issues, such as the opioid crisis (237).

Amid the current uncertainties caused by COVID19, where governments, local councils, and ordinary people in the US are critiquing, condemning, or reforming the unemployment safety net, the welfare safety net, and the healthcare safety net, Watkins-Hayes offers readers a blueprint. Through rigorous sociological research, she provides an example of a successful, robust, inclusive safety-net (although not without its flaws) that ensures vulnerable people, and those considered on the margins, are supported and cared for.

Rachel Wallace is a Visiting Instructor in History at Loyola University New Orleans where she teaches on LGBTQ history, the 1960s, public history, women's studies and feminist theory. She is also a Research Fellow at the Southern Food and Beverage Museum and teaches courses in Women's Studies at Xavier University New Orleans. She completed her PhD at Queen's University Belfast in November 2018. Her writing can be found in The Journal of Popular Culture, Southern Cultures and The Public Historian.
View all posts by Rachel Wallace →
Bookmark the permalink.