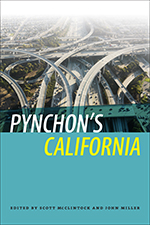 This collection of essays on the more accessible California novels of Thomas Pynchon—The Crying of Lot 49 (1966), Vineland (1990), and Inherent Vice (2009)—is definitely valuable for scholars of Pynchon, American literature, and twentieth-century culture.  The appeal of these novels is not only are they bridges to his more daunting works like V. (1963), Gravity’s Rainbow (1973),  Mason & Dixon (1997) and Against the Day (2006), but these novels also deserve attention for their reworking of the detective genre in a California setting with Republicans like Nixon and Reagan as well as the stereotypical hippies and potheads, two groups juxtaposed along the lines of the elect and preterite in Pynchon.  In these novels, California, the quintessential America as a sunny natural paradise, ends up as a historical anticlimax in ecological and political distress, although some redemptive characters and signs are present.  Aptly, Pynchon also uses California for the setting of his anti-climactic endings in Gravity’s Rainbow and Against the Day, as John Miller points out in his essay.  As the twentieth-century zeitgeist has arguably been captured in Pynchon’s longer works, the three California novels and this collection become helpful entryways into American culture as it is full of hippiphanes (to borrow a coinage in Inherent Vice), epiphanies or (hippie/hip) insights into Pynchon’s California.  Many Americanists who do not study Pynchon will appreciate the essays on ecology, the labor movement, film, real estate and highways treated below, but a few essays will mainly appeal to critics and students of postmodern literature.

Two essayists defend Pynchon from critics who see his characters as superficial and unsympathetic.  Writing about Against the Day, William Logan states that “No one has ever wept over the death of a Pynchon character the way thousands wept over Little Nell” (85).  Millard defends Pynchon and the postmodern novel surprisingly on moral grounds: “That moral gravity can extend to matters beyond the scale of individual human morals is a difficult concept to grapple with” (90), and the focus of these works is on humanly altered ecologies and land use.  When the characters appear “cartoonish” (86) or flat in Pynchon and the humor is most juvenile, the moment is often about larger contexts like the rare sophisticated scenes of South Park.

Seeing the California novels as less important, Margaret Lynd nevertheless values the optimistic notes in these works.  She discovers many caricatures in the villainous characters, while the redeeming qualities of the protagonists seem offset by their ineptness.  Her claim that Prairie and other female characters are portrayed as frail does not seem warranted as the toughest spies and murderers in Vineland are women.  However, her positioning of self-parodying and redemption in the Pynchon panoply is central to foreground what is at stake in these novels

Focusing on the meaning of setting, Hanjo Berressem highlights the use of light, sand, fog and natural landscapes.  Insightfully following a Deleuze and Guattari allusion to its logical end, Berressem explains how surfing is a transformative moment in Pynchon as the surfer becomes part of the wave and can escape rational systems of control.  In a similar essay on roads, Stephan Hock points out how death is not only linked to whiteness in Pynchon but also to fog and highways in these three novels.  These readings of setting see the powerlessness of humanity in the face of wildfires, earthquakes, and fog as a sign of hope in the California novels as nature thwarts human zoning.

Two essays by Bill Millard and Scott Macleod approach real estate as a nexus in the clash between the owning elect and renting preterite.  Millard describes how environmentally unfriendly home ownership is more successful than the dissident utopian alternatives tried in Inherent Vice and California more generally. Millard explains that inherent vice is both a Puritan concept on original sin and an insurance term that indicates high risk such as a city or state built on the San Andreus fault or an ecology built on capitalist land distribution.

For Americanists, Scott Macloed’s essay, similar in ways to Millard’s, offers more historical background on gambling, sentimentality in hard-boiler movies, Adam Smith’s view of sentiments, and the less apparent links between real estate and paranoia.  Macloed also explores how Pynchon’s mysteries pastiche the conspiracy theory industry that burgoens after the JFK assassination.  Seen as “the godfather of contemporary conspiracy novel” by Samuel Cole, Pynchon states some of his goals more explicitly in these three novels full of echoes of film noir with detectives or puzzle solvers as protagonists, Macloed argues, and the central motive in the conspiracies in these California novels is usually real estate.

For literary scholars, Henry Veggian’s use of Georg Lukacs and Eric Auerbach as critical touchstones is demanding yet worthwhile as he puts forth a materialist reading of addiction in these three novels.  Addiction is taken in its literal and metaphorical sense when a government agency becomes “hooked” on its funding, a theme that readers of Gravity’s Rainbow will recognize.  Seeing addiction in this way allows Veggian to chastise conservative reactionaries but sidestep Pynchon’s criticism of drug abuse seen in the crack baby of the Harlingtons in Inherent Vice, an unexpected omission in an otherwise rewarding reading that includes an analysis of Prairie’s political education and marijuana as a crop of a small-scale farmer counterculture.  If Vineland is a pothead’s dumb joke, as Veggian provocatively suggests (141), the laughter is undoubtedly of the people at the expense of invasive government overreach.

Seasoned Pynchon scholars will appreciate Christopher Coffman’s contribution to a long-standing debate on the worldview of Pynchon.  Seeing Gnostic thinking as a key to a more nuanced understanding, Coffman suggests that people in Pynchon can inhibit a space of both the divine and profane, both the fallen and the saved.  Unfortunately, Coffman’s reasoning and sources will seem obtuse to newcomers to this debate, and not using the major works limits the scope of his argument.

This collection of essays offers additional proof of Pynchon’s continued centrality in American literature by displaying the politics of place and premeditated murder of some California stereotypes although Pynchon lets the utopian dreams for California, America, and the 1960s gracefully, painfully recede yet linger in these works as well.  Much of the continued interest in these works will undoubtedly stem from the nostalgia and interest felt for many of these postmodern dreams and places.

Tomas Pollard is the coordinator of the American Studies minor at a Bachelor level at the University of Applied Sciences Utrecht (Hogeschool Utrecht) in Utrecht, the Netherlands, teaching courses on literature, American culture, and writing. Currently working on an essay on Kurt Vonnegut, he has published essays on Willa Cather, Henry James, and Joseph Heller.
View all posts by Tomas Pollard →
Tagged  C20, C21, Literature.
Bookmark the permalink.