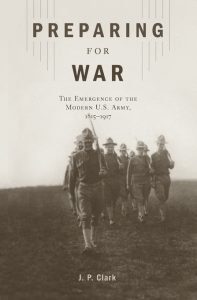 J.P. Clark combines his military experience and meticulous research in Preparing for War: The Emergence of the Modern U.S Army. The book is an insightful combination of military, political, and social history, and describes the evolution of Army officers’ formal education between 1815-1917 in an attempt to contextualise the shift from nineteenth to twentieth century understandings of military proficiency. To do this, Clark creates four generations for analysis.  Previous military historians of a similar ilk have taken a fundamentally different approach. Works such as Samuel Huntington’s The Soldier and the State: The Theory and Politics of Civil-Military Relations (1957) understand the profesionalisation of the army as a result of its isolation from society.  In contrast, Clark finds that the gradual professionalisation of the Army in this period was due to rivalries amongst generations of people influenced by the conflicts they fought and the resulting unique cultural understandings. 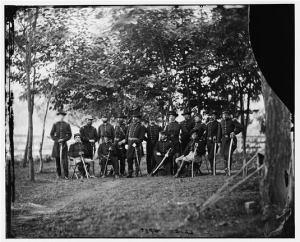 Major General William French was removed from command shortly after this image was taken in 1863. His service in the Mexican-American War did not adequately prepare him for a conflict of the magnitude of the Civil War.

Clark begins with the ‘Foundational Generation’, comprised of veterans from the War of 1812 throughout the antebellum period (6).  The prevailing idea at this time was that officers possessed aptitude and character, innate characteristics that could not be taught. Due to small military units, and the limited conflict, officers retained positions for decades, and rarely received education on advanced military theory.  These factors caused the understanding of military service to remain static for decades.  Such a pattern changed with the Civil War.  Officers’ performance throughout the conflict was inconsistent. In an attempt to limit these irregularities, the ‘Civil War Generation’ attempted to create institutional education to more adequately prepare the next generation of soldiers for war if another national conflict occurred (98). Although the size of the military decreased following the Civil War, the memory of serving resonated throughout the century.

Clark labels the third generation ‘the Composite Generation’, an amalgamation of Civil War officers (Union and Confederate) and those promoted after the war (7).  The Army was geographically spread throughout the United States, but lacked a significant conflict to engage it. The Civil War had resulted in an acknowledgement that military reforms were necessary, but the reformers who pursued such institutional changes ‘often worked at cross purposes, each shaped by his quite different professional experiences (8).’  For example, Emory Upton’s insistence that officers needed a formal military education was unpopular within military circles.  As many officers in this generation were promoted during the Civil War they were less inclined to support reforms that undermined their own experiences. 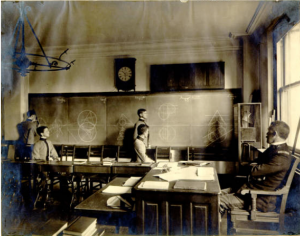 Cadets reciting their mathematics lesson at West Point in 1903. Such rigid training was reformed as it was felt that it did not adequately prepare soldiers for further military study.

Such reforms came coincided with the ‘Progressive Generation’, comprised of officers promoted from 1890 onwards.  Named for the era in which these officers lived, the institutional developments mirrored their namesake (120). Centralisation and bureaucratisation were symptomatic of the age and filtered to the military.  Thus, the new generation ‘understood the world differently than their seniors (8).’  Clark deftly shows, for example, how the lack of organisational clarity in the Army during the Spanish-American War (1898) prompted subsequent reforms, propagated by the civilian Secretary of War Elihu Root.  These reforms led to tangible changes, such as the creation of the Army War College at Carlisle Pennsylvania. Clark’s analytical approach in the book then, is both unique and fitting, as it allows the reader to grasp institutional changes, while simultaneously situating each generation within the context of their own time.

While Clark mentions soldiers of lower ranks intermittently throughout the book, it is the officers who take centre stage.  Though understandable due to the line of analysis he is pursuing, the overall argument would have benefited from the addition of a consideration of various soldiers in each period.  Similarly, there is a notable absence of race in Clark’s text.  If the Army is truly to be situated within the culture of the surrounding society, issues of race are too important to be ignored. Indeed, the role that African American freedmen would have in American society was a question that was still in flux during the outbreak of the Spanish American/Philippine American War, where discussions of race formed an integral part of the conflict.

Overall, Clark’s book intricately demonstrates that the U.S. Army was not a static institution; rather it was a living product of each generation, developing and adapting throughout the century. Such an emphasis on contextualising the military within contemporary society allows for Clark to explain the complexities and developments of the Army itself.  This leads to his concluding point that due, to the inextricable link between the military and society, it is not accidental that the birth of the Modern United States was also the inception of the modern US Army. Preparing for War is a thought-provoking read, demonstrating that the value the Army places on military education derived from a gradual century-long development, which was not only cross-generational, but also connected to larger societal shifts.  Clark ultimately Emphasies that the army is not an institution isolated from society, but rather one affected by and intricately tied to it.

Krysten, a native of Northern Maine, is in the second year of her doctoral studies at the Unviersity of Edinburgh, where she also completed her MA and MSc. Her thesis is entitled 'The Hardest Conflict: Morale and Identity in the Continental Army during the American Revolution, 1775-1783'.
View all posts by Krysten Blackstone →
Tagged  C19, C20, Military History, Progressivism, War.
Bookmark the permalink.