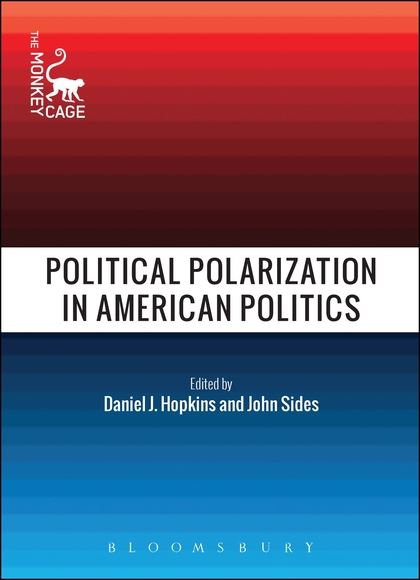 The polarization of American politics is often seen as a damning indictment of a political system which concerns two political parties for the majority of the time. Polarization is announced as a modern day symptom that has ‘impeded negotiation, compromise, and good governance.’(11) It is a view shared by both those individuals within the political theatre and also observers of American government. In their edited collection of posts from political science blog The Monkey Cage, Daniel J Hopkins and John Sides have compiled twenty six essays that are spread over four thematic sections dealing with the following questions: How are we polarized? Why are we polarized? How is polarization dealt with outside the United States? What can be done? The answers are intriguing and food for thought for all students and observers of United States politics.

The belief that polarization is a modern concept is explored by several authors. Nolan McCarty states that the modern manifestation has its roots in the 1970s, and suggests that successive Republican movements to the right have caused the schism to widen (12). Thomas Carsey and Geoffrey Layman argue that polarisation is ‘the natural state of American politics’ and that historically polarisation has been about one issue at a time. They further suggest that easier access for activists into the party system has meant that polarisation is currently about multiple issues at any given time and causing ‘conflict extension’. (24) Morris P Fiorina and Samuel Abrams suggest that the contemporary electorate in the United States is akin to that of the 1970s, and that there is still a political centre. What has changed is that self-identified Democrats have become more liberal and conversely Republicans have become more conservative. (34) 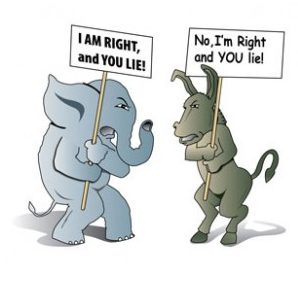 One of the most refreshing and clarifying essays is Sean Theriault’s ‘Partisan warfare is the problem’ in which he claims that the problem with US politics being more productive is not political polarisation. Indeed Theriault rightly sees polarisation as an opportunity for ideological opposites to honestly debate policy to find solutions to government problems. It is the supremacy of legislative gamesmanship over honest debate that leads to polarization being ineffective as a catalyst for solving policy issues. Further to this, the author argues that it is political warfare not polarization that is hurting American politics as it ‘serves electoral goals, not legislative goals’. (17) It is an argument that is expanded by David W Brady and Hahrie Han who state that the current state of Congressional polarization is not a historical anomaly but a return to the historic norm. In addition they argue that even when voting was polarised, government progress was possible on both economic and social issues, and has been true for most of the life of Congress. (108)

The suggested solution to political polarisation – or to ensure that it stops from being a hindrance to the mechanics of government – varies from author to author. Robert Shapiro sees young voters as key to future polarisation and suggests that the Republican Party’s attraction on economic issues, gun control, and abortion is instrumental in maintaining current political divisions. (115) Richard Pildes recommends structural reform of party leadership to strengthen party leaders within Congress. Pildes illustrates the rise of personally branded politicians that have caused political fragmentation within both the Democrat and Republican Parties. His solution is to enact campaign finance laws to allow financing only to the parties and not individuals. This reform would hinder the political fragmentation that he believes makes Congress dysfunctional and enable party leaders to have greater control of their parties. (120) Morris P Fiorina on the other hand recommends leaving things as they are, stating that the lack of majority on issues such as abortion, immigration, deficit reduction and environmental issues is representative of the United States as a whole. Fiorina suggests the stalemate is better than the continual policy changes that were undertaken in similar circumstances in mid-twentieth century Britain. (130)

The collection offers no definitive answer to the United States’ political turmoil but offers an excellent illustration of the differing views on polarization, especially that of its causes, and possible remedies. Its sometime contradictory nature is a result of diverse opinions on the issue but does not detract from the quality of the writing.  Whilst the variety and number of writers is its strength, it is also its only weakness as some of the theories are far too complex to be fully argued in what are relatively brief tracts. While the book has appeal for political scientists and observers in American politics, it could appeal to a wider audience had the presentation of such arguments been more detailed. Regardless of this the collection discusses a complex topic with obvious expertise making it a worthy read. The diverse range of solutions to such a well-debated subject makes it a welcome change to the singular view that polarization is the death-knell for the American political system.

Dafydd Townley is a Graduate Teaching Assistant and PhD student in the University of Reading's History Department. His doctoral thesis 'Spies, Civil Liberties, and the Senate: The 1975 Church Committee' investigates the conflict of maintaining national security while observing civil liberties in the United States. His interest include the United States Intelligence Committee and modern US political and social history.
View all posts by Dafydd Townley →
Tagged  Politics.
Bookmark the permalink.