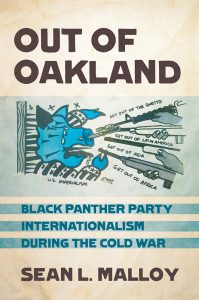 Sean L. Malloy’s book provides a convincing and engaging history of the internationalism of the Black Panther Party (BPP). It is a valuable contribution to scholarship on the BPP, black internationalism, and the intersection of issues of race and the Cold War.

The book is structured chronologically, first covering the roots of black internationalism before the emergence of the BPP, then the development of divergent strategies of internationalism in the late 1960s and early 1970s, before examining the split between Huey P. Newton and Eldridge Cleaver, which led to the fragmentation of the party.

Malloy’s principal argument is that internationalism played a central role in facilitating the growth and success of the BPP, contributing to its position as ‘arguably the most iconic representative of the black freedom struggle in the late 1960s and early 1970s’ (243). Malloy investigates how this internationalism interacted with the Panthers’ domestic analysis, concluding that, at their high point in the late 1960s and early 1970s, ‘the BPP’s domestic and international efforts were mutually reinforcing in both theory and practice’, and that ‘[t]his productive synthesis of local and global was a major factor in the ability of the Panthers to survive and even grow in the face of intense pressure from law enforcement agencies’ (3-4). Core themes of Out of Oakland are thus the link between the Panthers’ domestic and international activism, and the argument that the Panthers’ international strategy was a vital element of their success.

Malloy draws out the early roots of the Panthers’ internationalism, summarising the history and influence of previous incarnations of black internationalism from 1955–1966, and situating internationalism as part of the Panthers’ philosophy from the very beginning. The argument that African Americans were a colonised people within the United States – as advanced by figures such as Malcolm X and Harold Cruse – was a crucial theory which was adopted and developed by the Panthers in their formative years. This anticolonial analysis was evident in the early strategies of Huey P. Newton and Bobby Seale, who carried loaded firearms and conspicuously shadowed local police – ‘patrolling the pigs’ – in order to dramatize the colonial status of black Americans and mobilize the black community.

The shift from symbolic and rhetorical internationalism to an attempt to form more practical and direct alliances, as well as the consistent tensions between theory and practice, is another narrative which plays out in this book. Malloy identifies the development of an ‘anticolonial vernacular’ in the late 1960s as a crucial turning point in the history of the BPP. This reflected the influence of Eldridge Cleaver and Emory Douglas who, in the pages of the Black Panther newspaper, developed a rhetorical and visual strategy which at ‘its most effective […] seamlessly mixed the global and the local’ (72). This vernacular, including the use of profanity and the use of the epithet ‘pig’, communicated the connections between the struggle against white supremacy at home and abroad in a way that was relatable to the lived experience of African Americans.

Malloy views the development of an anticolonial vernacular as a successful strategy, although he also identifies its shortcomings, perhaps the most significant being that the development of this vocabulary did not prepare for the practical implications of building successful alliances with ‘Third World’ countries and organisations. The majority of the book chronicles the successes and frustrations the party encountered in moving away from rhetorical and symbolic internationalism – first in its transnational organising efforts in 1968-1969, and later through Cleaver’s attempts to form practical alliances with revolutionary governments during his time in Cuba and Algeria – finding that Cleaver was often frustrated in his attempts to engage directly with the geopolitics of the Cold War.

Malloy’s style throughout relies on the continual contrasting of the strengths and weaknesses of Panther’s international strategy, analysing first the strengths of a tactic and then its shortcomings. One weakness which Malloy underlines throughout his study is the sexism which characterised the BPP, and the failure of male leaders to challenge traditional gender roles. Despite this criticism of the BPP, or more accurately because of it, Malloy’s book is dominated by male figures. This imbalance reflects not only the realities of gender relations within the BPP, but also Malloy’s focus on the leadership of the party and his use of archival material, including the Eldridge Cleaver and Huey P. Newton collections. Where possible, Malloy does emphasise when female Panthers took on a leading role, particularly after the split between the domestic and international section of the BPP, and Kathleen Cleaver is a continuing presence in this book. However, as Malloy notes, more work remains to be done on the role of women within the party.

Out of Oakland is an important contribution to scholarship on the Black Panther Party, the history of black internationalism, and of African Americans during the Cold War. The book is engaging, detailed and convincing from start to finish; rather than providing another general study of the party, Malloy’s is a history through an international lens, illuminating this vital part of the BPP’s history.

Book Review: Presidents and Their Pens: The Story of White House Speechwriters by James C. Humes
Book review: A Short History of U.S. Interventions in Latin America and the Caribbean by Alan McPher...
Book review: The Royalist Revolution by Eric Nelson
Book Review: State of Recovery: The Quest to Restore American Security after 9/11 by Barry Scott Zel...
Book Review: The Gospel According to David Foster Wallace: Boredom and Addiction in an Age of Distra...
Book Review: Dueling Grounds: Revolution and Revelation in the Musical Hamilton ed. by Mary Jo Lodge...
Book Review: 'Who Rules the World?', by Noam Chomsky
Book Review: Sounding American: Hollywood, Opera, and Jazz by Jennifer Fleeger

Sophie Joscelyne is a PhD student at the University of Sussex. Her research focuses on the concept of totalitarianism and its significance among American intellectuals from the Cold War to the War on Terror.
View all posts by Sophie Joscelyne →
Tagged  African American Culture, Black History, C20, Cold War.
Bookmark the permalink.