From Disneyland’s ‘Main Street, USA’ to the historical living-history museum of Colonial Williamsburg, the small town has always held a mythic allure in the American cultural imaginary. For purveyors of commercial and cultural ideology, such as Walt Disney, Henry Ford, and Norman Rockwell, it is a sacrosanct place of American innocence. For other artists and social commentators, however, such as Sherwood Anderson, Sinclair Lewis, and H. L. Mencken, the small-town is an enclave of conservatism, insularity, and backwardness. In his new publication, American Small-Town Fiction, 1940-1960, Nathanael T. Booth assesses these ideological vagaries through the focalised study of mid-twentieth century American literature, arguing that the small-town is vital to ‘America’s self-fashioning’ (1) of a democratic centre that is characterised through changing modalities of nostalgia, utopia, isolation, and melancholy.

The unique nexus of Booth’s study is his carefully selected primary material which sits apart from the typical canon of small-town literature – namely Sherwood Anderson’s Winesburg, Ohio (1919) and Sinclair Lewis’ Main Street (1920) – that dominates scholarship of small-town America. Within his chosen texts Booth identifies the mutual theme of ‘redemptive nostalgia’ as their defining characteristic, a term he describes as a ‘remembering of the past with the goal of remaking the present’ (6). Looking at writers such as Henry Bellamann (Kings’ Row, 1940), Grace Metalious (Peyton Place, 1956), and Ray Bradbury (Dandelion Wine, 1957), Booth oscillates between texts and periods in a self-styled ‘psychogeography’ of the small-town, touring its idiosyncratic landmarks (train stations, drug stores, churches) by way of their attendant representations in literature and popular culture. An emergent critical field, psychogeography is defined by the OED as ‘the study of the influence of geographical environment on the mind’, and it is through the study of these symbolic places, equally imaginary as they are real, that Booth finds his critical muse.[1] ‘The literature of the small town is a literature of disillusionment’ (40), Booth writes in a typically pithy coda to his first chapter, ‘Columbus on the Platform: The Train Station’, and such conclusions are reached elsewhere via this thematic navigation of the small-town mapped by its physical and fictive referents.

The structure of Booth’s study continues in this vein, adopting a central theme for each chapter which is fixed to a referent or locale native to the small-town. Chapter 2 is titled The Crisis of Individuation: The Schoolhouse and deals with education in small-town American fiction. Chapter 3, The Small Town Bildungsroman : The Malt Shop looks at the coming-of-age narratives in Booth’s primary material. Chapter 4 No Town is an Island: Main Street and the Town Square challenges Ryan Poll’s small-town criticism in favour of a cohesive and interconnected reading of the local and the national. Chapter 5 False Transcendence: The Movie Theatre considers filmic representations of small-town America and, more specifically, the visual adaptations and subsequent abridgements of Booth’s primary materials. Chapter 6 Good God, Bad God: The Church looks at the centrality of religion in small-town America. Chapter 7 titled Fortunate Fall: The Court House examines the judicial process in small-town fiction, taking James Gould Cozzen’s The Just and the Unjust (1942) as its case study. Chapter 8, Transcending Division: The Outskirt, considers the marginalised and transgressive denizens of small-town narrative; and the ninth and final chapter, In this Garden of Death: The Graveyard looks at the pervasive coda of mortality that seems to suffix all narratives of small-town America.

Perhaps the most illuminating notion posited by Booth is in his eighth chapter, The Outskirts, in which his discussions of the marginalised and neglected in small-town fiction arrive at the following provocative terminus: ‘The phenomenon of outsiderliness is central to the small-town aesthetic’ (168). All his carefully selected works, which largely dovetail in his broad survey of the small-town mythos, seem predicated on the idea of an outsider, be these social outcasts (Faulkner’s Emily Grierson), symbols of death (Bradbury’s ‘The Lonely One’), or simply the forgotten and anonymous denizens of the small-town environment.  Booth argues that it is only this disconnected narrator, this lonely and isolate figure, that can truly authenticate the narratives and experiences of small-town American life.  And yet, he argues, this comes at the price of one’s sociability: ‘For mid-century small-town fiction, individuation is the birth of loneliness’ (49).

Booth’s study locates neatly into a contingent of recent scholarship on small-town America and its ideological manifestations. Miles Orvell’s The Death and Life of Main Street (2014), which posits similar claims of the small town lying ‘at the heart of the American ethos’ is a useful touchstone for both Boone’s arguments and for those seeking a more expansive study of equivalent ideas.[2] Richard Francaviglia’s work Main Street Revisited: Time, Space, and Image Building in Small Town America (1996) is also cited early on by Booth as a fruitful port of call for examinations of small-town myths and their pervasion into the American national conscious. With that said, Ryan Poll’s recent work Main Street and Empire: The Fictional Small Town in the Age of Globalisation (2012) is perhaps the most important contemporary work to Booth’s study, as much of American Small-Town Fiction, 1940-1960 is dedicated to disproving and unpicking the arguments made by Poll. It is here that there are finds some issues in what is an otherwise engaging and welcome addition to small-town American Studies: so often does Booth rely on positioning himself as diametrically opposed to Poll that his own arguments can appear diffuse and vague. Booth readily admits that his audience, unlike Poll’s, Orvell’s, or Francaviglia’s, is ‘much less well defined’ (2) in a study that is as ‘limited’ as it is ‘expansive’ (15). As such, it would have befitted Booth’s study to continue expanding his own unique arguments rather than entertain anxieties over critical distinctions.

Booth’s study is an important addition to the growing canon of American Studies centred around small-town America and its numerous, complex myths. Particularly, Booth’s coinage of the term ‘redemptive nostalgia’ offers incisive readings of texts both within and without his periodization and offers up a novel and exciting critical mode for scholars and readers alike. More generally, American Small-Town Fiction, 1940-1960 provides insightful readings of neglected texts centred around ideas of nostalgia, loneliness, and how ‘small town fiction typically protests the hegemony of the powerful’ (152). Branching off the critical ‘Main Street’ of small-town studies, where Orvell, Poll, and others have set out their stalls, Booth here offers a new critical avenue along which we are invited to wander, offering a psychogeographic reappraisal of American ideals in the ‘relatively controlled environment’ (14) of the nation’s fictive rural communities. 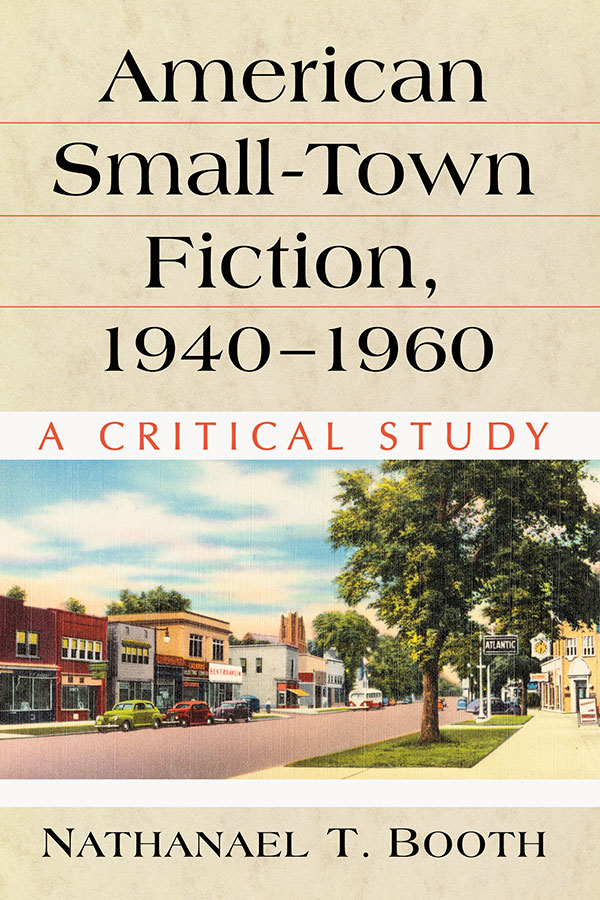 The Stettheimer Dollhouse: A Life and Salon in Miniature
American Studies in Europe: Interview with Elizabeth Rodriguez Fielder, University of Mississippi
Review: ‘Keywords: Nineteenth-Century American Studies in the Twenty-First Century'
The Death Dance: the Pickwick Club Disaster in Boston, 1925
Book Review: Desire and Disaster in New Orleans: Tourism, Race, and Historical Memory by Lynnell L. ...
Review: 'American Communities: Between the Popular and the Political'
Book Review: Why the Right Went Wrong: Conservatism – From Goldwater to the Tea Party and Beyond by ...
Landscape and Masculinity in Ernest Hemingway’s A Farewell to Arms