Book Review: Missionaries of Republicanism: A Religious History of the Mexican-American War by John Pinheiro 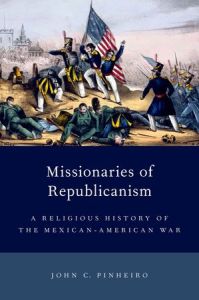 In Missionaries of Republicanism, John Pinheiro continues his work on the Mexican-American War of 1846-8.  Having written on President James K. Polk and civil-military relations in his 2007 volume Manifest Ambition, Dr Pinheiro has sought to provide us with a religious history of the conflict.  Edward J. Blum, in his recommendation of this book, has stated that for too long American religious historians have avoided the subject of war.  This contention is substantiated by the relative paucity of scholarly writing on the religious aspect of even the American Civil War, which is strange when one considers the relationship between religion and society in that era.  Hence, Dr Pinheiro’s book seeks to fill an apparent gap in American religious historiography.

The primary argument of Missionaries of Republicanism is that the religious history of the Mexican-American War is the story of how anti-Catholicism emerged as being integral to nineteenth-century American identity as a white, Anglo-Saxon, Protestant republic.  At even a prima facie level, this thesis sounds plausible.  After all, the largely Protestant United States went to war in 1846 with an exclusively Roman Catholic country. The opinion of many Americans towards Mexico, furthermore, had been shaped by their anti-Catholicism.  This ideology had grown as a result of both the evangelical revivalism of the Second Great Awakening and the increased Roman Catholic immigration to the United States.  The latter phenomenon was viewed by evangelicals such as Lyman Beecher as a threat to America’s mission to spread religion and republicanism.  And so it needed to be stopped through political action and westward expansion.

The anti-Catholicism behind the Mexican-American War might appear odd in a pluralist context, but it must be remembered that Protestantism was often seen as essential to American liberty.  As a result of the influence Manifest Destiny, it was believed that Anglo-Saxons were destined to extend republican institutions throughout the western hemisphere.  Hence the Mexicans’ race and religion rendered them an obvious target for westward expansion.  The religious history of the Mexican-American War thus reveals that anti-Catholicism, westward expansion, Anglo-Saxonism, and republicanism were welded together into an ideology of American exceptionalism.

It is a mistake, however, to assume that American Catholics were passive actors in the Mexican-American War.  On the contrary, they used the war as an opportunity to display their patriotism by fighting in the U.S. Army.  President Polk also sought to counter efforts to turn the conflict into a religious war and consulted with American bishops and sending priests as army chaplains.  Indeed, it should be noted that one out of every five soldiers in the U.S. Army was Roman Catholic.  Unlike Protestant and evangelical commentators on Mexico, the American Catholics did not blame its backwardness on its religion, but upon the removal of Spanish clergy and the lack of Spanish influence following the Mexican War of Independence.  Thus, Dr Pinheiro suggests that they also adopted a Eurocentric approach to Mexico.

It would be interesting to speculate to what extent this approach represented an American Catholic variant of Manifest Destiny or American exceptionalism.  A sense of European superiority is perhaps demonstrated by that the fact that most Roman Catholic soldiers were more concerned with discrimination against themselves than with the treatment of the Mexicans.  Notwithstanding Daniel O’Connell’s efforts to recruit the Irish-Americans to the cause of abolition, it must be kept in mind that few American Catholics supported either radical abolitionism or racial equality.

Certain aspects of Dr Pinheiro’s analysis of religion and the war are particularly strong.  For example, he helpfully discusses how the war left various evangelicals in something of a moral dilemma. Groups like the Reformed Presbyterians (Covenanters) thought that it would expand the slave power.  Others such as Arthur and Lewis Tappan condemned the war as unjust, but still looked upon it as a providential means of bringing Protestantism to the Mexicans.  Thus, evangelicals could appeal to theodicy in order to argue that God used an unjust war in order to bring good out of evil.

The author helpfully notes significant tensions among abolitionists over the propriety of the conflict.  Although some got caught up in godly patriotism, others blamed the war on a proslavery conspiracy.  Dr Pinheiro highlights some flexibility in the non-resistant William Lloyd Garrison’s attitude to war, which would emerge again at the expense of intra-mural conflict among the abolitionists during the Civil War.

The dilemma that faced the Southern Whigs is also judiciously discussed.  It is argued that Southern Whigs such as John C. Calhoun opposed the war owing to fears that Polk was using it to extend the reach of the Federal Government.  The Southern Whigs were in an awkward position as the war promised their constituents further slave-territory.  Hence, they resorted to claiming that the regeneration of the inferior Mexicans was impossible, and thought any attempt to merge the races was incongruous with republican values.

He defines anti-Catholicism as being applicable to those who maintained Roman Catholics were not Christians, that the Pope was the antichrist, and who thought that the Jesuits were attempting to control the United States.  At this point, the reviewer would have preferred a little more nuance from the author.  While viewing the Pope as the antichrist might sound harsh and extreme to modern ears, it should be recognised that various nineteenth-century Protestant theologians combined a belief in the papal antichrist theory with remarkable generosity towards Roman Catholics.  Charles Hodge of Princeton Theological Seminary is one prominent example of someone who embraced such an outlook.

The reviewer was somewhat dissatisfied with the equation of evangelicalism with revivalism, perfectionism, and belief in the imminent return of Christ.  It might also have been helpful if the author had traced the limits of toleration back to John Locke’s view that Roman Catholicism was inconsistent with the safety of the state.   Moreover, one found the claim that blacks posed no real threat to the American experiment (owing to their enslavement in the South) to be somewhat overblown.  Surely the fear of racial amalgamation following emancipation was one of the reasons why Northern abolitionists faced so much opposition.  These points aside, Dr Pinheiro has provided us with a rich history of the role of religious ideology in the Mexican-American War.

Dr Daniel Ritchie is an Irish Research Council Post-Doctoral Fellow at the School of History and Archives, University College Dublin. He completed his Ph.D. thesis at Queen's University, Belfast and is currently working on a project related to the religious and intellectual history of antislavery. Dr Ritchie has had several articles published in leading peer-reviewed journals, and is the author of a forthcoming monograph, Evangelicalism, Abolitionism, and Parnellism in Irish Presbyterianism: The Public Life of Isaac Nelson, c. 1809-88 (Liverpool University Press).
View all posts by Daniel Ritchie →
Tagged  C19, Religion.
Bookmark the permalink.