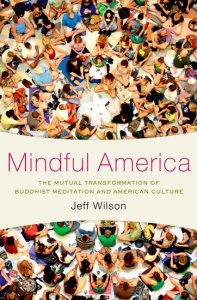 The growth of mindfulness in the United States has all the hallmarks of an American religious movement: belief, ritual, community, charismatic leadership and so forth.  Most commonly defined as “paying attention in a particular way: on purpose, non-judgmentally, to the present moment,” mindfulness is the trademark meditation practice at the heart of the groundswell.  Even for the uninitiated, one can see why mindfulness would be enticing: it supposedly reduces stress and anxiety; it appeals to the growing “spiritual but not religious” demographic; offers respite from the exhausting hyperactivity endemic to contemporary America, but also a sense of connection to something greater than oneself.

Wilson locates and describes mindfulness in a particular time and place unique to late twentieth and early twenty-first century America.  Like its historical antecedents, the mindfulness movement bears trademark cultural tropes of its era, including capitalism, science, medicine, and advertising.  Mindful America consists of six chapters that reflect various dimensions of the movement: Mediating, Mystifying, Medicalizing, Mainstreaming, Marketing and Moralizing Mindfulness.  In turn, each section evokes one valence of the societal context out of which the movement emerged

An erudite study in and of itself, Mindful America also serves as a starting point for subsequent scholarly investigation.  For the layperson, moreover, it presents dimensions of the practice of mindfulness in America that may not be readily apparent to someone familiar with only one perspective on the practice.  Consider the Buddhist parable of the elephant and the blind men: if each blind person touches only one body part in an attempt to identify the animal, they would mistake one small part of the beast for its totality.  This book makes plain the abundant dimensions of mindfulness, broadening ones understanding of the practice.

For example, as mindfulness penetrates the clinical realm, we are forced to consider how the Western medical paradigm affects the ancient meditative practice and visa versa.  Inherent to this subject is also the notion of the secular.  Given the secular environment of the healthcare setting, is anything irrevocably changed by the transformation of mindfulness from a largely Buddhist practice to a secular, medicalized one?  Does it lose its transformative capability?  What is the role of soteriological and cosmological concerns once pivotal to the practice of mindfulness?   What do Buddhism and medicine gain or lose by virtue of their evolving conversation?  Wilson’s book provides the data necessary for intelligent and informed discussion on these grounds. 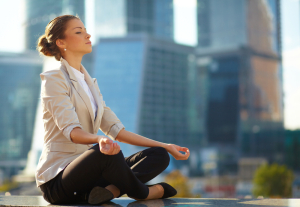 Wilson also makes clear that the mindfulness movement does not escape the reach of capitalism.  Some of his most scathing criticism stems from the insidious incursion of the capitalist instinct into the mindfulness landscape.  Bankers, financiers and venture capitalists now routinely use mindfulness practice in the setting of places like Wall Street and Silicon Valley.  Given some of the morally questionable financial strategies employed by a number of the signature American banking institutions—think Wolf of Wall Street, the subprime mortgage crisis and other forms of predatory lending—what happens to mindfulness when appropriated for the purpose of making bankers feel less stressed about their exploitative financial tactics?

The study has both breadth and depth—appropriately encompassing of the broad expanse of mindfulness practice yet specific enough to avoid reckless generalization that neglects the nuance and subtlety of mindfulness in America today.  No stone is left unturned as Wilson seeks to understand mindfulness in the broadest possible contexts—in light of the aforementioned American cultural tropes—alongside some of its benevolent and dastardly particulars: from mindfulness for suicidality to mindfulness for sex.  In the end, it represents an ideal example of the study of religion in America.

As the scientific and clinical study of mindfulness grows at a breathless rate, it also outpaces essential academic reflection on the broader context of the movement.  If purveyors of mindfulness in America have any hope of an enduring movement, scholarly analysis needs to continue hand-in-hand with its empirically oriented counterparts.  This book exemplifies the kind of humanities-oriented study crucial for balancing the exponential growth of mindfulness in science and medicine.  Indeed it would behoove scientists and clinicians steeped in mindfulness research to read Mindful America.

However, although ostensibly an objective and descriptive study of mindfulness in America, Wilson struggles to hide his cynicism for various aspects of the movement.  For example, his disdain for the manner in which some mindfulness “peddlers” appeal to Buddhism solely for the purpose of selling a product: “There is a progressive process: first Buddhism is made palatable via mindfulness in order to sell Buddhism, then mindfulness is made palatable via eliminating Buddhism to sell mindfulness, then mindfulness is so appealing and denatured that it can be used to see other products, such as financial services, vacations, clothing, computer software, etc.”  Even if such criticism is sensible, given his declaration of objectivity at the outset, it should be noted that he falls short at times.

Nevertheless, Mindful America is a timely and tremendous contribution to American Religious History, Cultural Studies and Buddhism in the West.  Wilson’s volume will be seen as one of the seminal works of mindfulness scholarship of its time.

I am an MD/PhD student studying Buddhist meditation practices in the West, with a particularly keen interest in mindfulness in psychotherapeutic settings. I graduated from Weill Cornell Medical College in 2014 and will finish my PhD at Emory in 2015. Eventually, I plan to practice psychiatry and continue to research – and participate in – the evolving conversation taking place between Buddhist meditation practices and western medicine.
View all posts by David Saunders →
Tagged  C21, Religion.
Bookmark the permalink.