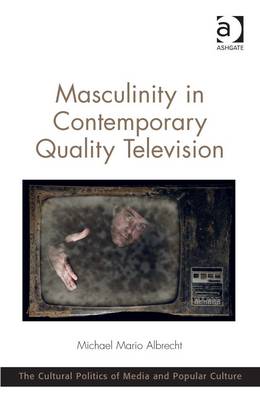 Leaning heavily on Judith Butler’s conception of gender as performative, Mario Michael Albrecht reads an interesting, if mildly ill-fitting, selection of TV shows – Californication, The League, Mad Men, Breaking Bad, Hung, Louie, and Girls – as all depicting ‘intricate treatments of masculinity’ in a period he labels ‘The Obama Era’ (19). Albrecht contends that no matter how radical their depictions of masculinity, each show is ‘haunt[ed]’ by older, more violent, patriarchal forms (22). These shows are regularly described as ‘Quality,’ which Albrecht points out does not denote ‘any inherent aesthetic validity’ (15). Instead, the classification provides ‘a means of identifying a collection of shows that emerge during a particular historical and cultural moment that share common themes’ (15). Albrecht persuasively contends that ‘Quality television’ – much like his definition of masculinity – is a ‘fluid generic category’ rather than a ‘normative assessment’ (23).

Albrecht first assesses FX sitcom The League as a ‘bromance,’ and a show that ‘offers a hyperbolic version of contemporary masculinity,’ that suggests the concept is ‘an overdetermined term with multiple iterations and complexities, rather than… a simplistic essentialist version of singular maleness’ (42). He provocatively uses the language of ‘safe space’ to suggest how the virtual space of a fantasy football league is utilised to act out unacceptable performances of masculinity, safe from misinterpretation and consequences (46). While The League may seem an odd show to analyse as an instance of ‘Quality’ television – Albrecht acknowledges this seeming incongruity throughout the chapter – it works well to introduce many of his broader ideas, and emphasizes the arbitrariness of what qualifies certain shows as Quality. However – and this issue reappears when he reads Louie  (113) – Albrecht contends ‘by refusing to demonstrate growth through the characters or to buffer the jarring dialogue with narrative, the show throws masculinity into sharp relief as a problematic set of discourses’ (59). His valorisation of the sitcom form reads oddly, as the lack of narrative development is largely driven by the need to allow audiences to dip in and out.

Albrecht then turns to AMC’s Mad Men, a show more widely perceived to be ‘Quality television.’ He uses Mad Men to analyse ideas of nostalgia as ‘pain, not as pleasure’ – and avoids retreading upon the numerous critical readings of the show as a wistful depiction of bygone masculinity (62). Albrecht interprets how contemporary audiences may have an ‘uncanny’ experience when watching Mad Men: ‘its hyperreal portrayal suggests the masculinity represented is incredibly different from twenty-first-century masculinities while astonishingly similar’ (66). He also intriguingly assesses the masculinity of the show’s protagonist, Don Draper, alongside reality TV that fetishizes blue collar work, and contends that Draper’s ability to ‘transcend his working-class roots and achieve a great deal of financial success’ is a ‘foreign and distant’ concept to audiences in the late 2000s (72.)

Continuing the theme of class immobility, Albrecht assesses the AMC melodrama Breaking Bad alongside the HBO comedy Hung as reflective of concerns about masculinity after the financial crash of 2008. Albrecht uses Naomi Klein’s ‘shock doctrine’ thesis in a novel manner, to emphasize one of his consistent points; crises – i.e., the financial crash of 2008, and Albrecht details a fascinating history of these crises – are used to ‘restructure’ ideas of masculinity, ‘and this restructuring of gender often looks to reaffirm and re-establish traditional gender norms’ (91). Albrecht suggests Walter White from Breaking Bad and Ray Drecker from Hung ‘embody the displacement of this repressed masculinity onto environments where it can thrive’ – White becomes a drug dealer, and Drecker a male prostitute (102). Albrecht’s subtle critique of these shows is the most persuasive of the book, and should be read by anyone interested in the effects of the crash on popular culture.

In his final chapter, Albrecht assesses two comedies – HBO’s Girls, and FX’s Louie. He contends that the Girls character, Adam Sackler, suggests contemporary masculinity is a performance of ‘disorientation and discombobulation over cohesion and coherence’ (109). Only when inebriated can Adam achieve a ‘fantasy’ of a ‘complete and centred subjectivity’ (109). However, unlike the safe space the characters of The League use, ‘that completed subject is frightening and violent’ (109). Albrecht contends that Louie furthers this critique, and indeed ‘queers traditional masculinity and heterosexual romance’ by suggesting the ‘absurdity’ of the traditional binaries masculinity and gender rest upon (111). This queering ‘reinforce[s] the impossibility of performing successfully any established version of gender and/or sexuality’ (112).

Albrecht concludes by acknowledging his book’s glaring omissions, such as how race relates to these issues of masculinity. He questionably places the onus for this upon the shows themselves, suggesting this omission is ‘partly the result of the limited versions of masculinity on offer in contemporary Quality television shows’ (124). However, this merely highlights how much more work there is to be done in this burgeoning field. Albrecht’s analyses are regularly illuminating – especially his concept of older masculinities haunting contemporary performances – well researched, and point the way for further study.