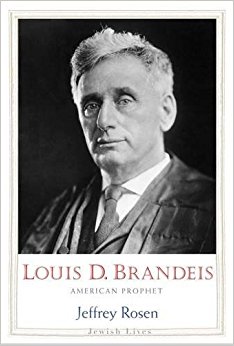 The title Louis D. Brandeis: American Prophet for Jeffrey Rosen’s book is an appropriate one given the status of American politics today. Despite having been professional and politically active at the end of the nineteenth and at the turn of the twentieth century, many of the concerns of Justice Louis Brandeis are still very relevant today. As a result, Rosen’s book is a must read – if not for the historical analysis and insight it provides, then for the greater perspective it provides for our current era.

The central theme of American Prophet is the decentralised approach Brandeis took to dealing with the issues of his time, whether political, legal, or economic. While Brandeis acknowledged that the Gilded Age, the period of economic prosperity in the United States that followed the end of the Civil War brought about the need for a more active government to regulate and sustain a certain level of ‘fairness’ in American life, Rosen quite rightly emphasises that this did not necessarily mean bigger government for Brandeis. Indeed, Rosen is meticulous in his presentation of Brandeis as someone who favoured libertarian viewpoints on governmental power, economic behaviour, and the handling of finances.

In emphasising this libertarian quality to Brandeis’ approach to politics, Rosen addresses the suspicion that many people, scholars and citizens alike, have about Brandeis’ role in the Progressive Movement, and whether or not he was actually a true Progressive. Regardless of whatever it means to be a ‘true’ Progressive in any case, there is certainly a noticeable difference between Brandeis and other Progressive activists like Walter Lippmann, particularly because many of his opinions ran counter to the ‘New Deal’ Progressive image, including his infamous role in declaring the NRA unconstitutional. Rosen, however, makes a good case for Brandeis’ inclusion amongst activists involved in the Progressive Movement and presents his libertarian approach as not only complementary to Progressive thought, but also as a safeguard against some of the more negative aspects of the movement, such as the elitist and exclusionary approach in ordering society. An example of this approach would be the position held by Progressive Walter Lippmann, in which he called for ‘crucial political decisions to be taken out of the hands of the intellectually limited citizen body as a whole and vested in an informed, educated and trusted elite.’ [1] Indeed, the title American Prophet is quite apt in its suggestion that Brandeis was able to foresee many of the unwanted consequences of Progressivism, such as a large government facilitating the creation of large corporate structures that dominate a national market. When perceived from this vantage point, then, it is relatively easy to see commonality with other Progressive thinkers like John Dewey.

Rosen’s greatest accomplishment is in tracing the development of Brandeis’ beliefs from his childhood experiences into young adulthood. Having escaped the backlash against the Revolution of 1848 in Austria, Brandeis’ father immigrated to the United States in the hope of pursuing a life rooted in liberal thought, one that would not have been available to him at home. This context would go on to shape his son’s rather secular approach to Judaism, while the influence of his uncle would ironically drive his future support for Zionism. The influence of his mother would be instrumental in his ambiguous views on segregation since she, a former liberal abolitionist, raised a son in Kentucky, a state not known as a model environment for race relations.

Rosen has taken a particular interest in Brandeis’ Jewish ancestry. As a result, the author puts in a great deal of effort to recount, in particular, his rather relaxed religious beliefs and simultaneous support for the creation of Israel. In fact, a whole chapter is dedicated to the subject, which is justified on the grounds that it appeared to have occupied much of Brandeis’ later life. Rosen even does an excellent job of making the argument that Brandeis’ Jeffersonianism, and not Judaism, was the primary inspiration for his Zionist views. However, by dedicating so much effort to his Zionist aspirations other aspects of Brandeis’ life seem to have been glossed over.

Indeed, if there is a weakness in Rosen’s book, it is the lack of attention given to Brandeis’ rather uncertain position on African Americans in the United States. Rosen does highlight that Brandeis’ ambiguous stance on segregation has confronted students of the former justice with some ethical difficulties. Yet Rosen here provides evidence that contradicts the image of a rather indifferent Brandeis towards the African American community, and highlights that ‘he privately advised lawyers seeking racial equality on at least two occasions’ (19). However, there is no real attempt to tackle this topic, and so the analysis feels shallow and superficial. Given that scholars of Brandeis more generally have tended to neglect his relationship to the African American community and segregation, it would seem that Rosen may have missed an opportunity to enlighten readers on that aspect of Brandeis.

Nevertheless, Louis D. Brandeis: An American Prophet is a compelling book that provides a unique insight into our society, governance, and economy today. Through Brandeis’ libertarian Progressivism, Rosen makes connections between the former justice’s positions in the early twentieth century to the contemporary issues of state surveillance today, ‘too big to fail banks’, and unpopular corporate structures. Despite a few minor weaknesses, it stands as an accomplishment for Jeffrey Rosen and a chance for us to understand ourselves today by learning about the life and politics of Justice Louis Brandeis.

Queer Clout – Chicago and the Rise of Gay Politics by Timothy Stewart-Winter
Book Review: Kennedy: A Cultural History of an American Icon by Mark White
Book Review: William Faulkner and Mortality: A Fine Dead Sound by Ahmed Honeini
Book Review: The Unspeakable Failures of David Foster Wallace by Clare Hayes-Brady
Book Review: The Good Occupation: American Soldiers and the Hazards of Peace by Susan L. Carruthers
Book Review: Philosophy and Literature in Times of Crisis: Challenging Our Infatuation with Numbers ...
Book Review: James and Esther Cooper Jackson: Love and Courage in the Black Freedom Movement by Sara...
Book Review: The FBI in Latin America: The Ecuador Files by Marc Becker

Dr. Alfred Cardone is an American living in Europe, taking advantage of the "outsider" perspective in order to understand his country's political system and how members of society interact within the United States. He received a BA in History from Bates College in Lewiston, Maine in 2002, an MA in Political Science from Northeastern University in Boston, Massachusetts in 2004, and recently received his Doctorate from King’s College, London in 2016. Alfred's research interests include populism, radical politics, and protest movements.
View all posts by Alfred Cardone →
Tagged  C20, Law, Legal History, Politics, Race.
Bookmark the permalink.