Book Review: Literature and the Law of Nations, 1580-1680 by Christopher N. Warren 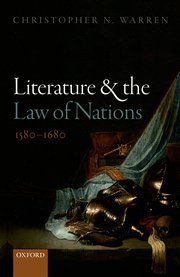 ‘If the past is a different country, all law is international law (10)’.

It is a most intriguing business for an American Studies scholar to review a book that hardly mentions America at all.

On the surface, Warren’s Literature and the Law of Nations seemed an unusual choice of reviewing material, almost a whimsical nod to the fact that this year the academic and literary world is celebrating Shakespeare’s 400th anniversary. Focusing on interdisciplinary analysis of texts by key figures like John Milton, William Shakespeare, or the less familiar Hugo Grotius, at practically no point throughout its course does the book refer to the Americas, be it an analysis of American literary heritage, religious thought or even the American reception of the texts discussed.

Nevertheless, this particular book is highly recommendable to anyone who would like to understand the exact philosophy shaping the early modern communities within the New World (and thus pointing towards the source from which the particular idea of the American approach to democracy has sprung). The attitudes, philosophical foundations and socio-legal concepts carried across the Atlantic during the early modern era were actually born on European soil. This period was also marked by great social change (Warren calls it ‘transitional’), and an emerging new world order. Concerning questions such as law, morality, or presenting those through the medium of literature, this new order had to be adequately reflected. The Americas were a perfect testing-ground for this novel way of looking. Alternatively, one could argue further that modern-day America could be seen as a ‘time capsule’ where the attitudes fomented during the age of Protestant Reformation shape the general society up to present day.

Why, then, the ‘law of nations’? To a more cautious critic, Warren’s attempt to equalise international legal theory with the theory of literary genre might seem far-fetched. Yet the author suggests that modern legal scholarship has become overly reliant on the ideas of ‘nation’ or ‘state’ and events taking place on home soil. International law, it is implied, exists as an ‘anomaly’, in a far less rigid state of being, broadly covering general aspects (like property law) which transcend geographic borders, and are not confined within one state. The interdisciplinary ethos of the entire book ties in well with Warren’s hypothesis that international law traverses imaginary or real borders, allowing for an ‘interconnected’ life.

Warren’s central argument draws attention to the interdisciplinary spirit of the book. During the early modern era, the boundaries dividing law and literature were far less marked than in the times of modern scholarship. Literature (and particularly the play-writing genre) was actively employed to set up hypothetical examples of legal problems, and, in the form of developing plot intrigue, put forth the various ways to address them. In providing an utterly mesmerising portrayal of enigmatic Alberico Gentili, Warren reveals how an early modern poet or writer might be envisaged as a lawyer pondering on a fresh potential legal precedent, or vice versa. This connection calls to mind Abraham Lincoln’s unique approach to practising law by using his immense storytelling abilities – and of the more modern, dramatised, ‘American’ approach to setting out the case in the courtroom.

The key purpose of this book, in Warren’s own words, is ‘that early modern literary genres helped generate and systematize some of the most important categories and suppositions of modern international law’. Whilst law and literature do interconnect (at least in the early modern context), the various genres (tragedy, comedy, and so on) are employed to address diverse legal issues. The chapters are then organised by assessing those issues alongside a relevant genre, which allows for an uncluttered, in-depth insight.

Warren efficiently presents her selected case studies. Some of these are beautifully argued (such as the analysis of private international law as seen through the prism of Shakespeare’s The Winter’s Tale and the genre of comedy); others are perhaps just a touch too modern for comfort (as in the attempt to connect Milton’s Samson Agonistes and the theory of human rights).

The interdisciplinary approach is presently gaining greater recognition in the field of American Studies, with many scholars basing their methodology on it. Warren vividly presents the historical epoch when interdisciplinary scholarship was not merely one way of doing things, but in fact the most popular, for ‘when the law of nations traded poetry for professorships and donned the new garb of international law, it did not erase its literary history (229)’.

Far from being potentially distracting, the interdisciplinary approach, as Warren would have it, might give a fairer view of modern events such as G.W. Bush’s stance on the human rights (discussed at the end of the book). Law cannot be considered in isolation if we want to build or sustain ‘a more democratic international law (233)’.

60 Seconds With Jade Tullett
‘We cast these medals away as symbols of shame, dishonor, and inhumanity’: Veteran Protest and the R...
Book Review: Chasing the American Dream - Understanding What Shapes Our Fortunes by Mark Robert Rank...
Book Review: Jimmy Carter and the Middle East: The Politics of Presidential Diplomacy by Daniel Stri...
From Lemonade to the Louvre: Beyoncé and Jay Z’s Contestation of Whiteness and Showcasing of Black E...
Book Review: Contemporary American Fiction in the Embrace of the Digital Age by Béatrice Pire, Arnau...
“Be Curious, Not Judgemental.” Influences of Positivity and Kindness in Ted Lasso
“You Think I’m Joking”: The Weaponized Comedy of President Obama’s Stand-up Addresses at the White H...

I am an independent researcher, graduated from Queen Mary, University of London, and University of Oxford, and I am currently gathering materials for a prospective PhD thesis on moral relativism and perception of evil as a social construct in a comparative analysis of USA and Russia in the 19th century. My key interests include USA-Russian relations from the antebellum period to the present day, presidential philosophy, and the life and works of Herman Melville.
View all posts by Olga Ackroyd →
Tagged  C16, C17, Law, Literature, Shakespeare.
Bookmark the permalink.