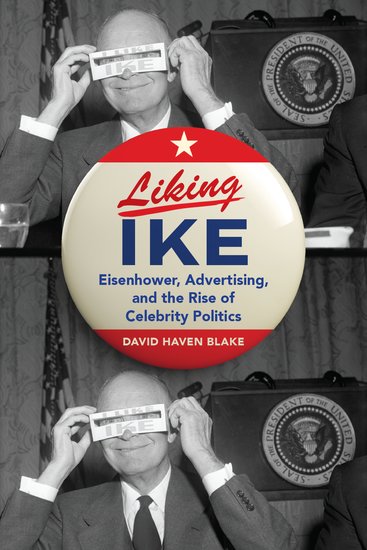 David Haven Blake’s Liking Ike: Eisenhower, Advertising and the Rise of Celebrity Politics enters the field at a timely moment. Published just before Donald Trump’s election to the presidency, Liking Ike reminds us that media and celebrity have been critical factors in electing American presidents for nearly a century. Acknowledging the importance of 1920s Broadway to the campaigns of Warren Harding and Calvin Coolidge, Blake’s primary concern is with the election campaigns of Dwight D. Eisenhower in the 1950s. Liking Ike posits that it was Eisenhower, not John F. Kennedy, who first exploited the new medium of television and the rise of celebrity to sell his campaigns, thereby ushering in the commodification of American politics.

John F. Kennedy’s infamous 1960 televised debate with Richard Nixon is often seen as the best example of Kennedy co-opting the medium of television to his electoral advantage. Thomas Brown has argued that Kennedy took advantage of a moment in which American voters were being transformed into consumers of political image, dependent for the first time on intangible factors such as personality and character [1]. In contrast, Blake asserts that Kennedy was merely the next stage in the development of the relationship between television, media and celebrity which had truly begun under Eisenhower.

Eisenhower’s success on the national political stage coincided with the dramatic rise of television. Blake argues that, despite a personal ambivalence towards television and celebrity, Eisenhower’s 1952 and 1956 campaigns came to rely increasingly on the power of the televised spectacle. Outsourcing responsibility for televised campaigns allowed Maddison Avenue ad-agencies to commodify and ‘sell’ Eisenhower. Blake explores the myriad approaches these agencies took, focusing particularly on the use of celebrity endorsements from Hollywood’s leading lights. Especially informative is a chapter focusing on ‘Ike Day’, a national television spectacular hosted by Jimmy Stewart. This ‘political pitch [wrapped] in terms of an entertainment’ (16), is central to Blake’s thesis that the Eisenhower years marked the moment in which image supplanted political dialogue, celebrities became vital tools of political endorsement and political spectacle became a central force in electoral politics.

Alongside Eisenhower, Blake seeks to augment his central argument by considering other presidents. Across three chapters, Blake assesses the legacy of FDR on the televised celebrity politics of the 1950s and the impact of the Eisenhower years upon Kennedy and Reagan. Whilst the development between the Eisenhower and Kennedy Administrations is clear and effective, Ike remains on the periphery of the Reagan and FDR chapters. Therefore, whilst interesting in themselves, they threaten to dilute Blake’s central argument somewhat. If, as Blake posits, his contribution to the field of celebrity studies rests on countering current histories of ‘breadth’ with a history of ‘depth’, ‘exploring those who defined and created the Eisenhower aesthetic’ (12), then these chapters seem to run counter to that goal.

Blake’s work is at its best when it keeps the Eisenhower campaigns at its centre. Alongside Eisenhower himself, Blake offers excellent analysis of the roles played by ad-men and celebrities alike. Particularly well researched and assessed are the contributions of advertising executives Bruce Barton and Sigurd Larmon. Some of the most insightful analysis comes in regards to Eisenhower’s Democratic opponent in both 1952 and ’56, Adlai Stevenson. Blake makes an effective argument that, whilst both Eisenhower and Stevenson viewed television and celebrity with suspicion, it was Eisenhower’s begrudging acceptance of them which propelled him to electoral success. In highlighting Stevenson’s downright opposition to techniques, ‘designed to sell an inadequate ticket to the American people in precisely the way they sell soap’ (104), Blake offers a new lens through which to view the failure of the Democrats throughout the 1950s, a party that was on the back foot and trying to play catch up when it came to embracing political spectacle; a trend they would reverse in 1960 with the glamorous John F. Kennedy.

Blake has produced a highly readable, well researched history of the importance of television and celebrity to the political campaigns of the 1950s. Particularly commendable is the way in which he integrates a breadth of archival materials with effective historical analysis, whilst integrating broader critical and media theory from scholars such as Guy Debord, Daniel Boorstin and David Reisman to underpin his argument. The book challenges the reader to re-examine the importance of 1950s television and celebrity culture to the commodification of American politics, rather than focusing directly on Kennedy and the 1960s as historians have tended to do. Yet it is precisely in that success that the work produces its most frustrating moments. At a relatively short 212 pages, issues such as how race and gender impacted media strategies and the influence of these strategies on the global Cold War receive too little attention. Perhaps the biggest question one is left with is how did Eisenhower take advantage of television and celebrity beyond the election campaigns? Putting Blake’s arguments about television, celebrity and electoral politics in conversation with work on Eisenhower’s propaganda and Cold War salesmanship, particularly from Kenneth Osgood, would have been highly rewarding. What Blake has succeeded in doing is establishing a firm and well-argued case for Eisenhower’s use of television and celebrity in the 1950s, opening new avenues for further research.

Mark Eastwood is American Studies PhD candidate at the University of Nottingham, researching how 20th Century presidents, including Eisenhower, sought to build public consensus around nuclear policy through discourse and the media.
View all posts by Mark Eastwood →
Tagged  C20, Politics, Presidents.
Bookmark the permalink.