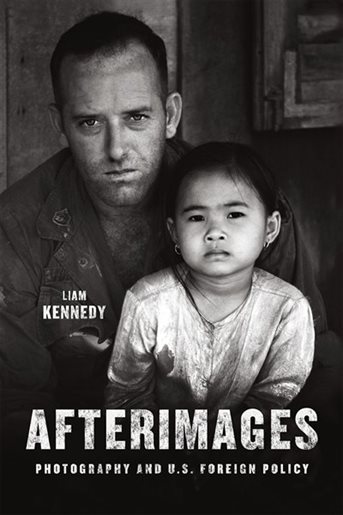 The distance between global politics and its mediation to the individual is perhaps as proximal as it has ever been in our current moment, where information technologies and social media reduce the disconnect and render world crises as visible, immediate concerns. Photography, as the most readily-available and instant of all digital visual technologies, sits at the heart of how geopolitics and, specifically, conflict are culturally consumed. Such ideas are brought to the fore in Liam Kennedy’s latest publication Afterimages: Photography and U.S Foreign Policy (2016), in which he recounts American foreign policy, from the Vietnam War to the War on Terror, through the lens of photographic mediation. The locus of his study is unquestionably the ‘photographer as witness’ (1) axiom, a phrase that recurs across the book and calls into question the ideological framework surrounding photography and its practitioners. Looking at photographers such as Larry Burrows, a Vietnam reporter who Kennedy and others describe as the ‘greatest combat photographer of his generation’; Susan Meislas and her controversial work documenting the Nicaraguan revolution; and Ashley Gilbertson’s moving accounts of the war in Afghanistan, Kennedy alights on several crucial case studies that fundamentally destabilise prevailing U.S hegemony.

In his introduction, Kennedy reconciles the practice of truth and authenticity within U.S photography and its cruciality during wartime. ‘His belief in agency of the photographer as witness and advocate,’ he writes of Vietnam photographer Phillip Jones Griffiths, ‘was impelled by ethical and political imperatives to report truth’ (1). Here, Kennedy finds a critical simpatico with the recent publication Photography after Photography: Gender, Genre, History (2017), a career-retrospective by visual culture critic Abigail Solomon-Godeau in which she similarly attests to the ‘kind of truth’ immanent within the photographic mode.[1] This question of truth, authenticity, and of the ‘photographer as witness’, is continued into Kennedy’s first chapter: ‘Compassion and Critique: Vietnam.’ Here, the ‘mythical terrain of war representation’ (24) visible in Larry Burrows’ photography on the Vietnam frontlines is positioned against the controversial nature of the war’s domestic reception. Kennedy discusses Burrows’ ‘coming-of-age’ (24) visual narratives, bespeaking the ‘loss of humanity’ enacted by the war, in concert with his deification among American photographers as a ‘fearless professional’ (32). Kennedy is attentive to the history of photojournalism as a discrete generic mode in his critical readings, frequently citing the overlap between Burrows’ narrative arcs and rare exposure to moments of tragedy with the formal trappings of the journalistic mode.

Elsewhere, Kennedy surveys the impact of photojournalism and other visual coverage during the Gulf War and Balkans conflict, considering wider frameworks of historiography – specifically Fukuyama – and its relation to the photographic medium. By drawing together a parallelism between ‘The end of photography’ and “The End of History”, Kennedy proposes multivalent critical interpretations of the photographic case studies to hand. He talks of the ‘forensic aesthetic’ to Peress’ work; of the hellish voyeurism evoked in Kenneth Jarecki’s famous photograph of an incinerated Iraqi soldier; and of photography’s role in challenging the dichotomous geopolitics of the Cold War. All such ideas serve to elucidate the continued ubiquity of war photography as the primary mediatory force between foreign conflicts and domestic citizens.

Perhaps an oversight in this compelling and engaging study is the omission of any specific critical writing on the various demographics that consumed photography across Kennedy’s chosen period. The framework of photojournalism that Kennedy rightfully compares and contrasts with his own chosen case studies is historically rooted in a very specific demographic; Life magazine’s popular photo essays were frequently intended for a ‘predominantly white, middle-class’ readership.[2] More attention to how specific demographics responded to the visual material documented by Kennedy’s chosen photographers, and how these groups altered and changed over time, would have proved useful in contextualising the changing commercial and cultural market of U.S photography.

The perceptions of the individual, the nation, and the global are all considered in Kennedy’s monograph, and the innate biases and perception barriers suffered by each are succinctly underscored by Kennedy’s quotation of American documentarian Errol Morris: ‘If we want to believe something, then we often find a way to do so regardless of evidence to the contrary’ (165). Looking through the visual catalogue of Kennedy’s cited photographers, questions of agency, of visual and moral truth, and hegemonic notions of ‘evidence’ abound. What we learn from Kennedy’s closing thoughts, as well as from the critics and writers to whom he is indebted, is that photography, and specifically photojournalism, appear to be forever caught at the eleventh hour. Kennedy himself notes in the introduction that ‘no media genre has ever been so repeatedly and publicly pronounced dead, exhausted, or irrelevant’ (11). So often does photography become the subject of jeremiads in American critical discourse that it is fitting such a form should be viewed as the defining archivist of U.S foreign policy. The rhetoric of obituaries colours photography and war alike; theirs is a relationship that seems at once instructive and destructive, immortalising the vital narratives of what many would willingly forget.