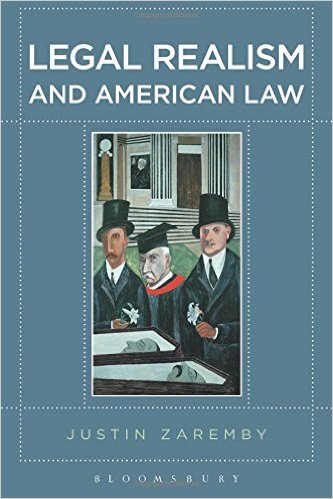 At a first glance, the concept of realism appears somewhat dated, belonging to a particular epoch of legal scholarship. Being essentially a movement that had emerged during 1920s “out of a fundamentally progressive mood” [1] and gradually has fallen by the wayside since, it may appear as a quaint historic notion that a few dedicated academics grew to be fond of perusing, in a way reminiscent of an interest in pennyfarthing bicycles or silent film. Yet, as Justin Zaremby’s recent and thorough study shows, this perception could not be further from the truth. Not only very much alive and kicking at the moment, realism is growing more and more resonant with the direction in which the legal world is developing today.

As Zaremby shows early on, in the highly engaging preface chapter, the key idea around which the entire concept of legal realism centres, is: can other aspects of academia, or life in general (politics and public policy in particular) affect and re-shape the law as we know it, so that it correlates more closely to the pressing issues that permeate society at this very minute? Or is law an unmovable edifice, “like some ancient god, whose shrine only the elite and the priestly caste tended,” [1] remaining immune to any updates or changes pervading the socium?

Bringing in as an example Sonia Sotomayor’s memorable speech in 2009, where she stated that a female judge of Latino background may bring into the final judgement the merit of the experience that a conventionally-educated white male judge may not possess, Zaremby leaves us with a burning dilemma: is the act of pronouncing a legal judgement an exercise of personal power – and is it indeed ethical to use the said power (acting with the best possible intention to bring about positive change) to point the unviolable force of the law into a somewhat unorthodox direction?  Should the law remain firmly objective at all times? Can everyman (or woman) change the age-old system for the supposed best? The debate between Sotomayor and Lindsay Graham (a Senate representative for South Carolina) that Zaremby dwells at some length upon, perfectly illustrates the ongoing opposition between those who support the notion of legal realism, and those who do not, happening in the present-day courtroom. He then subsequently calls upon a number of respected figures voicing their support for realism in a straightforward way; in particular, Hanoch Dagan, according to whom realism “allows for scholarship that is relevant, not overly idealist, and capable of attaining an accurate understanding of the law” [Preface, xxvii] precisely by recognising and respecting existing problems rather than overlooking them. Indeed, the preface chapter, both in terms of written style and the structure of the argument, manages to succeed in making one seriously contemplate the potential benefits that legal realism brings.

What, then, are the benefits of legal realism? Zaremby makes for a strongly convincing case. The historical overview of the development of the legal scholarship in America proves to be a fascinating insight worthy of a monograph to itself. In particular, one cannot remain indifferent to the revolutionary change brought about by C.C. Langdell a few decades before realism emerged fully as a recognised notion; when the life of law students was turned “from one of apprenticeship and recitation to one of reflection and criticism.” [3] Although still harping on the early days, the grounds for serious analysis, thought and beneficial change have been laid. Instead of remaining confined within arcane boundaries made for recitation rather than true understanding, and determined by historical issues that do not have relevance to the modern universum, the law, if permeated by the realist spirit, becomes a concept linked with notions such as progress, inclusiveness, and greater fairness for all.

Putting aside the modern-day discourse emergent from the Sotomayor example, Zaremby then goes back in time to re-visit a case which has long been notorious for its unsatisfactory outcome and controversy surrounding it. For myself in particular, as a scholar versed in the Communist history in Russia, it was fascinating to look at the trial of N. Sacco and B. Vanzetti from a vantage-point of legal realism. 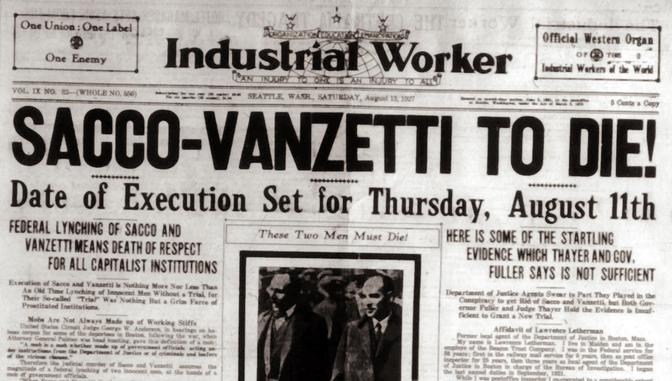 The trial of Sacco and Vanzetti in 1927 was a controversial yet a landmark case in that it showed the potential deficiencies of the conventional approach to law, and reinforced the argument for supporting legal realism.
Image Source: https://storify.com/dcra4721/sacco-and-vanzetti-trial

In the Soviet Communist world, the figures of Sacco and Vanzetti had been rendered to appear as martyrs condemned by the capitalist system. Although Zaremby refuses to uptake this rather hysterical outlook, his analysis of what took place during the infamous Sacco-Vanzetti trial highlights the precariousness of the situation when an exercise of judicial power is carried out by a jury consisting of native New Englanders [31] against two men considered to be “outsiders” in that particular place at that exact time. One is left to ponder if realism could be a helpful tool in assisting with building a fairer society, and veering slightly away from the legal norms set in stone (as represented by the jury in Sacco-Vanzetti case) to incorporate the realities of the real, multi-cultural, changing socium. As the author claims, “it was in such a climate, where the law seemed not to speak for the larger goals of diverse groups within the society, that the legal realists gained prominence.” [34]

Another discourse that Zaremby dwells at length upon, is the notion of academic legal scholarship, and what the concept of realism meant for it. Perhaps, he seems to imply at certain points within the book, the true place of legal realism may lie not in the courtroom, but rather in the lecture hall. L. Graham’s fear that the nascense of legal realism in actual cases and trials would lead to a disordered, sporadic application of the law may be well-founded, but to an academic scholar, realism gives a tempting inter-disciplinary possibility to look at the law as a subject which is alive and endlessly fascinating. “A conception of law that is unscientific, in which law is a mere catalog of customs and rules, does not allow the legal scholar to engage in more than pure description,” [5] Zaremby argues, painting a dismal image of the discipline. Yet, instead of the typical perception of law as an exercise in learning by rote, both dry and arcane, as well as comprehended by an elite few “priestly” individuals, realism offers a wealth of opportunities to analyse and see for oneself where exactly the law stands in relation to society at large. It quintessentially becomes a science in full right, rather than a semi-practical exercise in applying the rigid rules (some of which could be quite outdated). 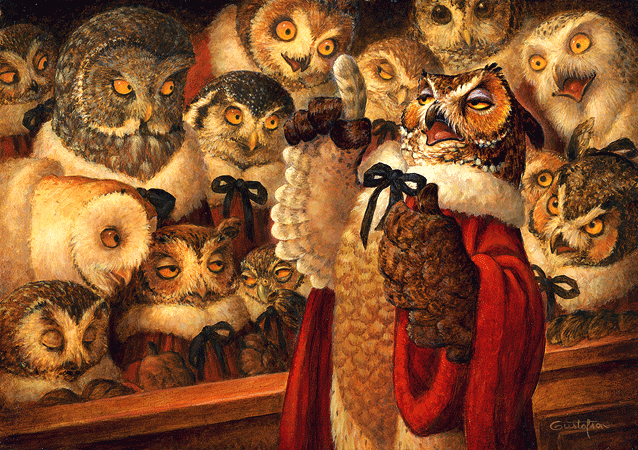 Legal realism expanded the horizons of law scholars and practitioners, challenging the typical “elitist” envisioning of the law as an ancient rigid edifice that only a selected few learned men could understand or use.
Image Source: http://www.scottgustafson.com/WN_mini_painting1.html

The cause for legal realism’s eventual irrelevance, Zaremby claims, was the overall reaction of the academic and political world in America at the rise of the dictatorial powers in Europe leading up to the Second World War. The examples of Hitler’s Germany or Mussolini’s Italy twisting the existing legal system under the guise of “democratic” or “political” rights to accommodate truly atrocious events were plainly seen as a threatening, harrowing vision of what the unbridled influence of the law by political and other particulars could bring about. There is more than a fleeting glimpse of the theory of exceptionalism at work, as Zaremby states that “legal realism became an easy target as America looked to protect its own institutions and values in the face of totalitarianism.” [93] This vision, brought to the foreground away from the safe confines of the academic thought, has done much to slow down the progress of realism in legal scholarship in the subsequent years, contributing to its eventual “fall,” as Zaremby names it.

Is Zaremby himself an advocate or a critic of realism on the legal stage? From his brilliantly balanced analysis of the subject, it is difficult to say. However, this book is especially valuable in that it presents us with a streamlined and comprehensive summary of a topic which has been overlooked, yet which is of immense importance to America of today, and it allows one to form a personal opinion of what exactly legal realism should mean and whether it has a place in our day and age.

After Katrina: Race, Neoliberalism, and the End of the American Century
Book Review: Nathanael T. Booth, American Small-Town Fiction, 1940-1960
Review: Bluecoat 300: Charity, Philanthropy and the Black Atlantic
Fargo 1996, Fargo 2014, and the Art of Homage
Review: ‘Keywords: Nineteenth-Century American Studies in the Twenty-First Century'
Review: ‘The “Not Yet” of the Nineteenth-Century U.S.’, BrANCA Symposium
Book Review: The Good Occupation: American Soldiers and the Hazards of Peace by Susan L. Carruthers
Book Review: Embodying Masculinities: Towards a History of the Male Body in U.S. Culture and Literat...

I am an independent researcher, graduated from Queen Mary, University of London, and University of Oxford, and I am currently gathering materials for a prospective PhD thesis on moral relativism and perception of evil as a social construct in a comparative analysis of USA and Russia in the 19th century. My key interests include USA-Russian relations from the antebellum period to the present day, presidential philosophy, and the life and works of Herman Melville.
View all posts by Olga Ackroyd →
Tagged  20th century history, C20, lawyers, Politics.
Bookmark the permalink.