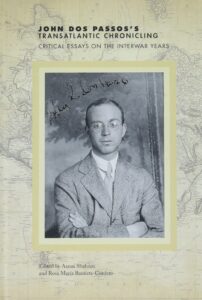 The University of Tennessee Press, $65

Notably,  the essay collection succeeds in maintaining Dos Passos’s relevance not only as an eminent modernist whose montage/camera-lens narrative techniques are disparate to that of other modernists, but also as a figure struggling to remedy the division between fiction and non-fiction. Woven with Dos Passos’s wavering political leanings and residencies in Europe, John Dos Passos’s Transatlantic Chronicling nestles itself in the long-line of criticism surrounding the author. Its relevance lies in how his corpus is situated in ‘the chronicle genre’, a term used in Shaheen’s introduction.[1] In an interview with the Paris Review, Dos Passos admitted he had ‘been calling [his] novels contemporary chronicles’ because of his ability to simultaneously distance himself from politics, while remaining aware enough to write about war and sociopolitical happenings from afar.[2] If we refer to him as a ‘chronicler’, it remains unsaid in the introduction what is gained or lost for readers who neglect to read his work through this lens. Nevertheless, labeling Dos Passos a ‘chronicler’ is a thread that ties the essays together.

The three essays in the first section, ‘Chronicling War and its Aftermath’, showcase the different characteristic ways Dos Passos captures how war is chronicled in conjunction with its physical and mental impact on the self. Co-editor Bautista-Cordero’s piece is ambitious yet convincing as it argues for a reassessment of Adventures of a Young Man (1939). Her assertions are tempered with a thoughtful and convincing argument that warrant a critical reevaluation of the novel. Her sharp viewpoints explore whether Dick’s character can ‘be read today as fictionalized historical reportage’ as she provides a much-needed, reliable, and updated diagnosis of Dos Passos’s political leanings in relation to his Adventures.[3]

Part two of the volume investigates American consumerism and capitalism strictly in Manhattan Transfer (1925) in an attempt to balance the volume with discussion spanning the breadth of Dos Passos’s interwar writings. William Brevda’s humor in ‘The Hat in Manhattan Transfer: A Jazz Age Tale of the Man in the Straw Hat and the Arrow Collar’ brings a necessary comic relief to the text given the last section’s emphasis on the body’s treatment as ‘cannon fodder’. With Bautista-Cordero, Brevda brings one of the most intriguing concepts to the volume in that the oft-noted straw-hats mentioned in Manhattan Transfer hold cultural and commercial weight. In tandem with Manhattan Transfer, Whitman, Poe, Ulysses, and Gatsby — along with a wealth of contemporized writings — are situated to illustrate the cultural importance once-associated with seasonal fashions.[4] Brevda’s thorough research into the significance Dos Passos’s depiction of these straw hats can make readers of Manhattan Transfer feel negligent for having been hitherto unaware of their significance.

Meanwhile, Lauro Iglesias Quadrado, in ‘Between a Novelist and a Chronicler: John Dos Passos in Manhattan Transfer’, pivots back to the gray area in which Dos Passos’s fiction lies: is it wholly fictional, historically-based, or some combination? This piece gets at the crux of the genre-issue posed by Shaheen in the introduction and how it differs from Bautista-Cordero’s thinking. While Adorno, Benjamin, and Sartre are pulled into Quadrado’s conversation, he argues how ‘Dos Passos’s literature has a documentary style that flirts with both journalism and journalistic satire’.[5] Alberto Lena then discusses a motif that finds itself in almost every essay: Dos Passos’s montage/camera-lens narrations. Whereas some pieces integrate the concept without substantial input, Lena deviates from others by asserting how King Vidor’s film The Crowd (1928) shares Manhattan Transfer’s focus on a city, where a place takes on a significance akin to that of a character.[6] For Lena, both Manhattan Transfer and The Crowd ‘furnish the American audience with a new model of the individual inhabiting the modern metropolis’.[7] Thus, Lena’s essay is another step away from the war chronicles in the first part of the volume. Its merit lies in how ‘social realism’ and a city’s omnipresent historicism have paralyzing effects manifested in conformity (among other confluences) and how it goes beyond stating that shots taken in The Crowd merely compare to the written style of Manhattan Transfer.[8]

One qualm with the text, however trite, concerns its title. Specifically, the ‘transatlantic’ in the title,  suggests the discussion will explore places aside from Spain. With the exception of Jessica E. Teague and Lena’s Russo-focused essays and those on Spain, there is a lack of worldliness in the collection inferred by the title. A quote from David Murad’s ‘Dos Passos and the Promise and Failures of the Second Spanish Republic, 1933’, in part three, can be taken out-of-context to elucidate the volume’s shortcoming: ‘[Dos Passos’s] residences included Belgium, Germany, France, and England […] travel destinations included Italy, Egypt, Greece, Turks, and Mediterranean islands’.[9] This may be refuted in that Dos Passos’s extensive time in Spain principally warrants a lengthier discussion.[10] Yet, ironically, meditations on the relationship between Don Quixote and Dos Passos’s Rosinante to the Road Again (1922), posed by Eulalia Pinero Gil, are a mere subsection of her chapter that warrant the space of a full-length piece. In this piece, we learn that aside from basic thematic similarities, ‘Don Quixote […] was one of Dos Passos’s favorite characters, and he incorporates this powerful mythical character in the travel book to create a modernist epic narrative’.[11] One cannot help but wonder if Dos Passos quixotically explored a chronicled approach to the epic.

Despite minor hiccups — including some lacking in critical engagement, a predominance of historical discussion that sometimes overshadows its relation to Dos Passos, and an arguably incomplete transatlantic chronicling — the volume maintains a nuanced approach to Dos Passos’s writing by fascinatingly illuminating the biographical and political underpinnings of his career. John Dos Passos’s Transatlantic Chronicling: Critical Essays on the Interwar Years steps away from comparisons to many of his contemporaries that are name-dropped within the collection. Though some may find fault how the authors do not pit Dos Passos against other modernists, this works in the volume’s favor. Since it is a step away from recycled twentieth-century approaches to modernism, the various authors allow readers to appreciate Dos Passos’s interwar writings separate of his contemporaries.

Francesca Mancino is an independent scholar who runs Lost Modernists (@Lost_Modernists) and created the Collected Crane Archives (https://scalar.case.edu/collected-crane-archives/index). She interviews for Five Books, and has been / is soon-to-be featured in Modernism/modernity, The Faulkner Journal, the Journal of Wyndham Lewis Studies, and The Modernist Review. She has also presented at conferences for the F. Scott Fitzgerald Society, the Ernest Hemingway Society, and the 30th Annual International Conference on Virginia Woolf.
View all posts by Francesca Mancino →
Tagged  Book Review, Chronicling, Dos Passos, Interwar, Transatlantic.
Bookmark the permalink.