Book review: Japanese American Ethnicity: In search of Heritage and Homeland across Generations by Takeyuki Tsuda 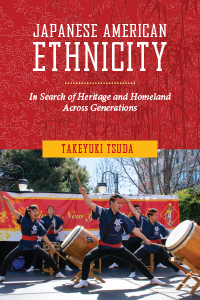 While the internment of Japanese Americans during World War II is an established focus of historical study, little attention has been paid to Japanese Americans regarding their status as one of the longest-standing Asian minority groups in the US. Tsuda seeks to remedy this by exploring the ‘contemporary ethnic experiences of U.S.-born Japanese Americans from the second to the fourth generations and the extent to which they remain connected to their ancestral cultural heritage’ (5). Tsuda shows how historical events have influenced the perception of Japanese Americans over time, drawing on first-hand accounts and his own interviews with Japanese Americans, which are helpfully synthesised to show differences both within and between each ‘distinctive historical cohort’ (10).

Tsuda’s work is impressive due to the wealth of interview data from second- (nisei), third- (sansei) and fourth-generation (yonsei) Japanese Americans. These first-hand accounts show how the different cultural landscapes in which these individuals grew up affected their self-perception as Americans and their willingness to engage with ethnic Japanese culture. As a ‘new’ second-generation Japanese American (shin-nisei; the child of Japanese parents who immigrated to the US after World War II) Tsuda also includes his own anecdotes. This acts as a counterpoint to his interviewees, who are mostly later-generation Japanese Americans.

Tsuda examines the reasons for the loss and resurgence of Japanese heritage amongst Japanese Americans from the pre-war period to the present. He argues that the assimilation of a minority group into the dominant society does not necessarily require the loss of cultural heritage (18). This challenges linear ethnic narratives, using the examples of the shin-nisei and the yonsei as generations which have sought to be bicultural and reinvigorate their heritage, while remaining fully Americanised.

The modern-day multicultural American society of the yonsei, where Japan is a global economic power and a US ally, is contrasted with the experience of the nisei who were forced into wartime internment and chose to assimilate by abandoning their culture. Their children, the sansei, were disassociated with their Japanese heritage to the extent that many have no knowledge of the Japanese language and no interest in visiting Japan. Many never knew that their parents had experienced internment until they learned about it at university (113), prompting the involvement of the sansei in the Asian American rights movement of the 1960s. While these events are not covered in any particular detail in the book, they add context to the cultural changes described.

Taiko, a traditional form of Japanese drumming, is depicted as a prime example of Japanese Americans re-engaging with their cultural heritage. Tsuda notes that the popularity of taiko has grown ‘exponentially after the 1990s’ (204). However, the form of taiko practised by Japanese Americans is different from its traditional form, incorporating new drumming styles, dance moves, and including the participation of women. Tsuda admits that taiko is ‘not so much about reproducing past forms of Japanese tradition’ (211), but that taiko is popular with Japanese Americans as a way to re-connect with their heritage while incorporating American influences. Tsuda says that there might be up to 1,000 taiko groups in the US (204), but fails to show whether these are predominantly populated by Japanese Americans themselves in terms of their participants or spectators. Tsuda notes that at a taiko performance he attended, there were ‘plenty of whites and people from other ethnic groups’ (198) and adds that most taiko ensembles ‘have substantial numbers of non-Japanese American’ members (245). Thus while there is clearly an important link between Japanese Americans and taiko, Tsuda fails to prove if this renewed interest in the art is related to the community’s sense of lost heritage due to ‘over assimilation’ (22) or rather to the widespread appeal of Japanese cultural forms in the modern, globalised era.

Rich with the selected personal anecdotes from Japanese Americans, the search for heritage and homeland within this group is discussed and understood through the lens of each generation. Tsuda highlights that while Japanese Americans are fully Americanised in cultural terms, they are still racialised as ‘Japanese’ by other Americans (including other minority groups), who frequently expect them to be familiar with traditional Japanese customs and language. Nonetheless, the majority of younger Japanese Americans admit that they have not felt direct discrimination (84).

The book makes an essential contribution to the field, adding a personal depth and understanding of the lives Japanese Americans across generations which is lacking from much of the existing literature. By challenging the concept of linear integration, highlighting the differences between older and younger generations, and showing the continuing importance of cultural activities for the Japanese American community, Tsuda’s work is at the forefront of the field.