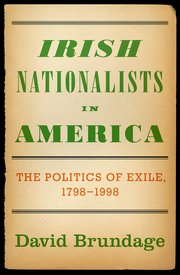 Irish Nationalists in America provides a thorough survey of centuries of Irish nationalist politics, distinctions in the Irish diaspora, and transnational cooperation. It is a valuable contribution to scholarship on the history of Irish-America, Irish nationalism, and the global Irish.

The book is a chronologically organised monograph analysing key events, organisations and leaders on both sides of the Atlantic. The first two chapters address Wolfe Tone and United Irish exiles emigrating to the early American republic. Chapters three, four and five consider Irish nationalists in America throughout the nineteenth century. Chapter three examines how Irish immigrants and second- or third- generation Irish-Americans campaigned to repeal the 1800 Act of Union between Great Britain and Ireland, opposed slavery and supported the Young Irelander Rebellion of 1848. The next chapter highlights the significance of the Great Irish Famine as large numbers of men and women emigrated, invigorating the Irish nationalism movement in America. Chapter five analyses the changing tactics of republican nationalists in both the United States and Ireland as organisations and political leaders began to more clearly address class and racial tensions within the movement. From chapters six to eight, Brundage investigates the renewed commitment to Irish independence, including Irish-American influences and responses to the Home Rule Crisis, the Easter Rising and the Irish War of Independence which culminated in the creation of the Irish Free State in 1922. Chapter nine explores the response of Irish nationalists in America to the aftermath of limited Irish independence, particularly the Irish Civil War and Irish neutrality during World War Two. The final chapter, the only one to focus on Northern Ireland and Irish nationalism in America, analyses the impact of the Troubles in Irish-American and broader American society, as well as highlighting President Bill Clinton’s role in the peace process.

Acknowledging the tensions surrounding gender, class and race within transnational Irish nationalism, Brundage details the complexities of Irish nationalist or republican thought. He highlights a strain within Irish-American nationalism that was deeply committed to racial equality, extending from the support for the abolitionist movement in the 1820s to the National Association for Irish Justice’s backing of the Black Panthers in the 1970s. The book also outlines reciprocal assistance from African-American leaders and groups for Irish nationalism, exemplified by Marcus Garvey’s support for Irish independence in the 1920s. However, Brundage shows that despite the legacy of Irish and African American cooperation, ‘anti-black racism had been a central feature of Irish American life’ (157). He examines the conflicts between supporters of racial equality and Irish-American conservatives, for example, some Irish-American nationalists condemned Bernadette Devlin’s outspoken support for Angela Davis and the black power movement. Brundage argues that, unlike nationalist groups in Ireland that largely excluded women, Irish nationalist organizations in America often embraced female supporters. In Ireland in the late nineteenth century, only one branch of the United Irish League admitted women and the Irish Parliamentary Party leader John Redmond opposed women’s suffrage (137). In the United States, however, American women played a key role in the Irish nationalist movement, particularly after 1843, as groups of women in Boston, Philadelphia and Providence engaged in fundraising for the campaign to repeal the Act of Union. In 1920 women were also integral in facilitating the boycott of British ships by Irish and African American longshoremen as the American Women’s Pickets groups appealed to shared oppression, creating signs stating “Ireland’s Fight Is Our Fight! Up Liberty, Down Slavery!’ (158).

Class tensions also played a significant role in the development of Irish nationalism in America. For example, Brundage explains how the leadership of the Fenian Brotherhood and Clan na Gael was largely professional but connections to trade unions and the Civil War-era labour movement led to a largely working-class membership. Many Fenian organisations sought to bolster the working class, promoting relevant social and economic policies. However, he also acknowledges that some Fenian leaders ‘firmly rejected the notion that workers should be challenging their employers’, causing a rift between the leadership and the rank-and-file (109).

Tackling decades of Irish nationalism, Irish Nationalists in America unsurprisingly focuses on political organisations, policies and activists. The book only briefly analyses the influences and importance of Irish cultural heritage to political identity and nationalism, and largely in Ireland rather than America. Brundage mentions the cultural nationalism of Young Ireland, a group of middle-class intellectuals founded in Ireland in 1842. The Gaelic League, also founded in Ireland by Irish language enthusiasts in 1893 reached out to the Irish in America for funding. The importance of food, music, language or literature to Irish nationalism in America could be further explored. The book focuses on political centres in the North, particularly New York, Boston and Chicago. Although the South had smaller numbers of Irish immigrants, it would have been interesting to read an analysis of the differences between Irish nationalism in the north and south and the intersections between Irish nationalism and Southern identity in cities like New Orleans and Savannah. Nevertheless, Irish Nationalists in America is an interesting, engaging and well-researched survey of transatlantic Irish nationalism.

Rachel Wallace is a Visiting Instructor in History at Loyola University New Orleans where she teaches on LGBTQ history, the 1960s, public history, women's studies and feminist theory. She is also a Research Fellow at the Southern Food and Beverage Museum and teaches courses in Women's Studies at Xavier University New Orleans. She completed her PhD at Queen's University Belfast in November 2018. Her writing can be found in The Journal of Popular Culture, Southern Cultures and The Public Historian.
View all posts by Rachel Wallace →
Tagged  American Working Class, C19, C20, Ethnicity, immigration, Irish Americans, Politics, Race, Transatlantic, Transnationalism, Whiteness.
Bookmark the permalink.