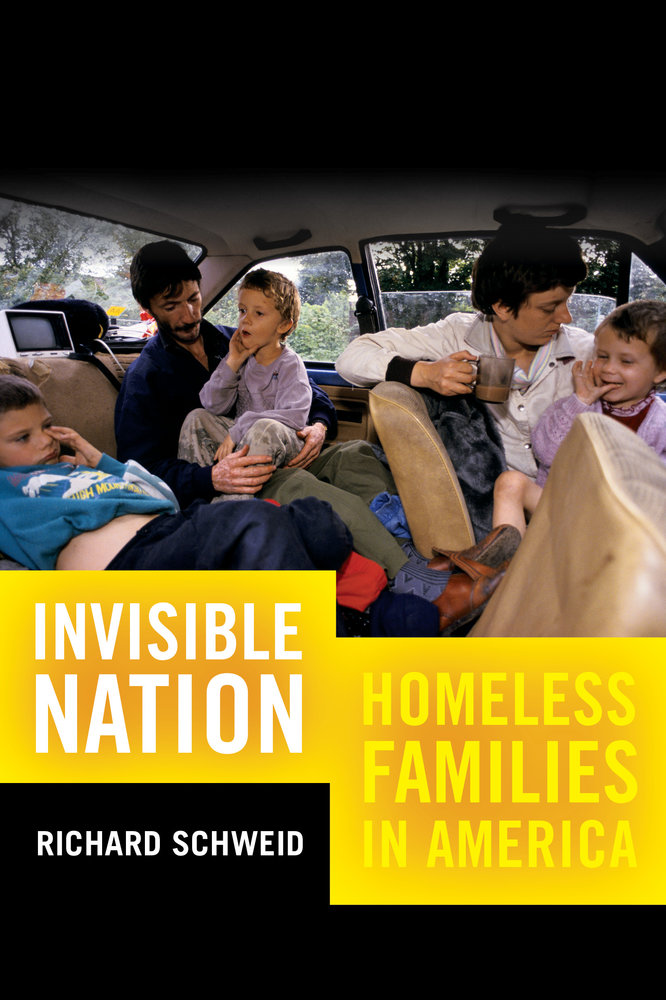 Throughout the last five decades, persistent homelessness in the USA has received sustained attention from scholars, politicians and the media. Awareness of the myriad forms of homelessness has increased: not only individuals living on the streets are defined as ‘homeless’ but also persons in shelters, hostels, motels, institutions or lodging with friends. Journalist Richard Schweid adds to the research by sociologists such as Shlay and Rossi (1992), Wright and Devine (1992), and Toro et al (2007) by focusing on a particularly disadvantaged group: homeless children. This insight is urgently needed: ‘Fifty years ago’, Schweid points out, ‘the word “homeless” signified dysfunctional individuals – mostly men – who drank heavily and slept rough. Now it is more likely to mean a young single mother with small children and a minimum-wage job. In 1980 families with children made up only 1 percent of the nation’s homeless; by 2014 that number was 37 percent of the total.’ (xiii). Writers including Ehrenstein and Tirado have tried out and chronicled their efforts to survive on a minimum-wage job but there has been little recent focus on the effects of poverty and lack of shelter on children: the two most significant studies by Walsh (1992) and Vissing (1996) are almost a quarter of a century old.

Schweid’s volume is ambitious: whereas Walsh wisely concentrated her research on a body of fifty-five case studies in Boston, Schweid travelled to five different cities to conduct, between 2009 and 2014, numerous face-to-face interviews with homeless adults, social workers, teachers, charity representatives and policy makers. He visits Nashville, Boston, Fairfax (Virginia), Portland (Oregon) and Trenton (New Jersey) but not Dearborn (Michigan), where his 2002 motel stay alongside homeless families aroused his interest in the ‘invisible nation’. Schweid always chose an identical neighbourhood scenario: a place that ‘repeated itself in the nation’s midsized and small cities: convenience stores doing a big business in cigarettes, beer, and lottery tickets, used-car lots, with prices soaped on the front windshields of vehicles on offer; check-cashing storefronts; and chain discount stores offering cheap goods to poor people with uncertain futures’ (3). Each city is afforded a separate chapter and the scope of Schweid’s research cannot be faulted: he draws on empirical data compiled by federal, state, private and non-profit agencies, on TV station and press news, on internet figures and authorial interviews.

In each of the five cities, Schweid reaches the same conclusion: US federal government, state government and non-profit organisations have failed to reduce homelessness due to frequent political changes in agenda and the withdrawal of funding. The suspension of NHTF funding until 2014, adjustments to rapid rehousing criteria, modifications to housing readiness procedures, and the lack of affordable housing stock have caused homelessness to rise. The latter in particular is an issue that cannot be ignored policy makers. Schweid also cites minimum wages in the hospitality and supply chain industries as contributing to the inability of hardworking families to afford housing. He criticises inhumane regulations that force families to leave their night-time shelters at 7.30 am even on cold and wet winter days, rendering a secure family life impossible. His proposed solution is simple: ‘we need to put families into housing, provide social services to the 10 to 15 percent who will need them, and provide the other 85 percent of families with rental assistance’ (185).

Peculiarly for a volume focusing on children, very few are interviewed by Schweid. One child who is quoted is bright and resilient Sudanese-born eleven year-old Grace; Schweid encounters her in a shelter in Fairfax, Virginia. We never learn what happens to the family of this engaging youngster because Schweid moves on so swiftly from her introduction to another family, in another part of Fairfax. This highlights three minor points of criticism: firstly, detailed case studies which would have afforded a thorough understanding are sacrificed for brief glimpses into individual life stories. Secondly, Schweid’s writing style, with its unpredictable switches from interview accounts to historical discourse and from empirical data to personal observations, borders on the erratic. And thirdly, despite Schweid’s admirably industrious approach, large pockets of deprivation do not receive his attention: the three most populous states of California, Texas and Florida, for example, go unresearched, as do ‘rust belt cities’ such as Cincinnati and Pittsburgh.

Schweid’s book is therefore perhaps not the proclaimed ‘call to action’ (Madison Smartt Bell) that its jacket cover praise suggests, but remains ‘an intensely thorough and compassionate eye on the plight of homeless families in America’ (Emmylou Harris). Invisible Nation provides compelling and urgent reading, engendering in the reader not only sympathy with the plight of the affected families struggling under the overwhelming burden of low wages, privacy intrusions, insufficient housing and poor nutrition, but also admiration for the teachers, social workers and politicians who work tirelessly to alleviate the most intolerable situations. This book deserves as wide an audience as possible to keep ‘America’s deepest shame’ (Allen Frances) at the forefront of twenty-first century social consciousness [1].

Christina Westwood is a PhD candidate at Keele University. Her research is in the field of spatial theories and literary geographies. Her areas of expertise and interest include the postmodern novel, American literature and literary geographies.
View all posts by Christina Westwood →
Tagged  American Working Class, C21, Politics.
Bookmark the permalink.