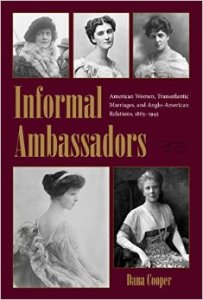 The wave of American heiresses marrying British aristocrats in the late nineteenth century has often added colour to studies of Anglo-American relations and been subject to specialist scholarly enquiry (notably Montgomery’s ‘Gilded Prostitution’ (1989)). Where Montgomery was more concerned with the social and cultural impact of these marriages and their relationship to a changing British aristocracy, Cooper focuses on five of the most prominent of these women as non-traditional diplomatic agents operating at a key period in the development of the Anglo-American special relationship.

Cooper’s case studies are all familiar figures: Jennie Churchill, Mary Chamberlain, Mary Curzon, Consuelo Duchess of Marlborough and Nancy Astor (for ease of reference they are referred to in this review by their married names). Each chapter provides a birth to death narrative of its subject as context for their Anglo-American “poli-social” activities. Familiarity doesn’t lessen interest, and Cooper exposes the complexity of Anglo-American relations in this period – not just in terms of the mature activities of her case studies, but in little asides such as the mention of Mary Chamberlain’s being given a scrapbook with a strong Anglo-American theme at the age of eight. Cooper situates her work within an important wider scholarly effort to recover and recognise the significance of female informal diplomats alongside a traditional narrative of the male dominated political and diplomatic class. Cooper is surely right that we need to attend to both the public (speeches, articles, charitable work) and private (entertaining, advising, correspondence) activities of these women as well as standard political/diplomatic relations to fully understand Anglo-American relations in this period. She is also revealing about the different attitudes to marriage in the two nations and about the ways that becoming an Anglo-American could both open up and close down opportunities for these women in contrast to the position of women in the United States at the same period. 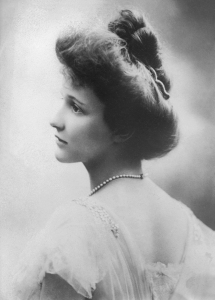 However, similarities and differences between their five careers complicate Cooper’s argument in ways not fully addressed. Thus, the Marlborough-Vanderbilt and Curzon marriages and the unofficial diplomacy of Jennie Churchill and Mary Chamberlain were all going on at the time of the Venezuela Crisis of the mid 1890s but are dealt with in separate chapters. How these informal Anglo-American elements interacted with each other, how they fitted into the formal diplomacy and the wider public/media reaction is not sufficiently explored. Equally but oppositely, Nancy Astor contrasts to the others given that her husband was a transplanted American, she married wealth rather than providing it and enjoyed a political career of a significantly different order.

Cooper’s overall view of the Anglo-American relationship is also problematic. She explicitly accepts the existence of a special relationship in the present, a contentious claim. Elsewhere the implication is that the work of these women was key to the start of that specialness, at others her evidence clearly shows, as other scholarly work has demonstrated, that the rapprochement of the late nineteenth century had limits and that there certainly is not an unbroken trajectory towards specialness. Greater clarity of analysis was needed here.

Questions are also posed by Cooper’s evidentiary base and the way it is treated. Contemporary witness are too often cited from the existing secondary literature without sufficient information regarding location and nationality, crucial in a dual nation study such as this. Fair attention has been paid to the American newspaper record but I would have liked to see it balanced with equal attention to the British perspective. More context, or explanation for its absence, was needed in some cases. Thus, Cooper utilises Nancy Astor’s draft of an autobiography but doesn’t explain when or why she wrote it. Perhaps we do not know but either way this surely complicates any reading of the text. Similar evidence is not always held to the same standard – the illustrious Americans at the Chamberlain wedding prove a desire on the part of the US government for improved Anglo-American relations but not the similar guests at the Curzon wedding. Overall, Cooper is strongest both on the American context of these women (and the contrast to their British experience and opportunities) and on American attitudes.

This book reveals again the complexity of studying Anglo-American relations since it requires not just the tracking of American and British interactions, but equally an understanding of the national context of those doing the interacting. The women examined here clearly impacted upon how Anglo-American relations were developing in this period and that interaction provides an invaluable perspective on how different the two nations could be. Cooper’s championing of informal diplomacy is important, but to reach a fuller understanding of its significance required a deeper, clearer research base, particularly in the British records, and a more critical appraisal of the enduringly complicated character of the so-called ‘special’ relationship.

Finn Pollard is currently Acting Head of the School of History & Heritage at the University of Lincoln. His most recent publications were on Elizabeth Monroe as first lady and George Washington's standing in surveys of presidential popularity. He is currently working on P.G. Wodehouse and Anglo-American relations.
View all posts by Finn Pollard →
Tagged  C19, C20, Transatlantic.
Bookmark the permalink.