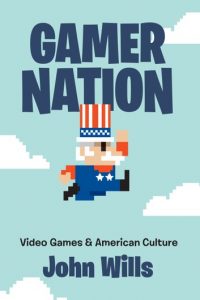 Gamer Nation features seven main chapters plus the indispensable introduction and conclusion. The introduction sets up the book’s aim: to demonstrate how video games ‘speak to American myth, culture, and society’ (6), thereby quietly acknowledging the continued relevance of ideas introduced by the Myth & Symbol School. Since Wills seeks to ‘trace the evolution of a gamic America’ (9; italics in original), the book follows an historical trajectory which begins with post-WWII American consumer culture and concludes with the failed virtual utopia of Second Life (Linden Lab, 2003–). Along the way, Wills discusses video game imaginations and simulations of ‘the West,’ video games and the Cold War, the absence of 9/11 in—if not erasure of 9/11 from—video games, video games as ‘ideological allies’ to the Bush administration’s attempts to ‘reassert[…] American symbolic power’ (151), and the sprawling metropolis of Los Santos in GTA V (Rockstar North, 2013) as an exaggerated, satirical, and caricatured version of Los Angeles.

Gamer Nation offers an intriguing look at the interrelations between video games and American culture from the 1960s to the present. Wills’s readings of individual video games are always nuanced and benefit from detailed socio- and media-historical contextualisation. In particular, the recurrent references to other media, from analogue games to literature, embed video games in larger histories of cultural production, thereby suggesting that, although there is something specific about video games, the medium did not—and individual games do not—emerge from a cultural vacuum.

Speaking of medium specificities, hardcore ludologists might wrinkle their noses when Wills laments that ‘early games struggled to offer sophisticated storytelling’ (32). This brief remark sets the stage for the entire book, as Wills primarily focuses on video games’ socio- and media-historical contexts as well as their narrative and representational layers rather than game mechanics, interfaces, and similar components. While this approach ties in with the monograph’s goals, it is unfortunate insofar as the sections in which Wills addresses ludic questions succeed in showcasing the cultural work gameplay performs. The significance of video games’ ludic dimensions, for example, comes to the fore when he argues that the procedural rhetoric of Civilization (MicroProse, 1991) espouses a Western point of view (50) or when he suggests that Cold War video games created the illusion that regular citizens were involved in the war (108). Indeed, partly owing to the fact that the sections focusing on gameplay and mechanics offer insights specific to video games, I would have appreciated more ‘close-playing’ at times.

Moreover, some genres and topics seem underrepresented. Of course, a monograph which seeks to tell the story of the evolution of Gamer Nation must be selective, but genres such as sports, racing, and horror come up short in Gamer Nation. Likewise, whereas Wills, for example, addresses the ethnic stereotypes employed in many western games and military shooters and masculinity in the context of GTA V, overall, topics such as gender (keyword ‘Gamergate’), race/ethnicity (in view of the mainstreaming of white supremacism), and the role of nature in an increasingly digital America would have warranted more detailed discussions.

Beyond these content-related points of criticism, Wills’s constant use of the past tense suggests that no one would play games such as Space Invaders (Taito, 1978) anymore. While the implied pastness relegates practices such as retrogaming to the sidelines, the use of the past tense becomes particularly jarring when Wills’s focus turns to more recent games, which millions of players around the globe still play. Indeed, the use of the past, rather than present, tense arguably counteracts the notion of Simulacrum America, which Wills repeatedly invokes. After all, in America ‘as simulation and digital story’ (9), all of these historically disparate video games (along with all the American icons, myths, and symbols they draw on) co-exist in an archive of perpetually present cultural artifacts.

Finally, since Gamer Nation tackles an audiovisual medium, the fact that the book features no illustrations is unfortunate. Especially for the uninitiated, screenshots of the graphical user interface of, for example, The Oregon Trail (Rawitsch, Heinemann, and Dillenberger, 1971) might have helped readers (quite literally) picture what the game looks like.

Irrespective of these points of criticism, Gamer Nation is a must-read for anyone working on post-World War II American popular culture and, probably, for anyone studying contemporary American culture. The readings of a variety of games from different historical eras demonstrate Wills’s skill for historical contextualisation and argumentation. Notably, some of the book’s more profound arguments are seemingly secondary remarks which interconnect American history, the American imagination, and video game history. One such example is when Wills notes that the Frontier, as imagined in digital games, was more than a mere simulated repetition of the actual frontier, as the ‘systematic conquest’ turned from the spaces of the real-yet-imagined West to seemingly ‘limitless, endless, and free’ digital spaces (41).

Wills has undoubtedly delivered a book which will inspire droves of future studies. His accessible writing makes Gamer Nation an ideal textbook for any university course on the interplay between video games and American culture. The chapter on ‘the digital West’ is of interest to courses discussing recent adaptations and appropriations of the western genre and/or imaginations of ‘the West.’ The chapters on the Cold War, 9/11, and the War on Terror, likewise, lend themselves to classroom use. While I would not expect the book to transform scholars who have so far avoided video games into gamers, reading Gamer Nation should make everyone understand the cultural work video games have performed in the past few decades. In short, Gamer Nation deserves to be on every Americanist’s bookshelf.

More on War by Martin Van Creveld
Fargo 1996, Fargo 2014, and the Art of Homage
Book Review: What Were We Thinking: A Brief Intellectual History of the Trump Era By Carlos Lozada
Book Review: Legalist Empire: International Law and American Foreign Relations in the Early Twentiet...
Book Review: Liking Ike: Eisenhower, Advertising and the Rise of Celebrity Politics by David Haven B...
Book Review: From the War on Poverty to the War on Crime: The Making of Mass Incarceration in Americ...
British Association for American Studies Annual Conference 2017, Day Two
Book Review: Hidden in the Mix - The African American Presence in Country Music by Diane Pecknold

Michael Fuchs is a postdoc in the Fiction Meets Science project at the University of Oldenburg in Germany. He has co-edited six essay collections, including Intermedia Games—Games Inter Media: Video Games and Intermediality (2019), and (co-)authored more than fifty journal articles and book chapters. For further details on his past and ongoing research, check out his website.
View all posts by Michael Fuchs →
Tagged  Video Games.
Bookmark the permalink.