Book Review: From the War on Poverty to the War on Crime: The Making of Mass Incarceration in America by Elizabeth Hinton

Elizabeth Hinton has a produced a work that is exceedingly relevant to modern debates and useful not only to specialists but to anyone interested in the historical roots of controversial topics such as mass incarceration, the policing of urban communities, stop and frisk searches, civil asset forfeiture, and the militarisation of American police forces. Hinton makes the connections to current events explicit and displays a striking earnestness; she is not simply discussing abstract policies but also critiquing modern American society. 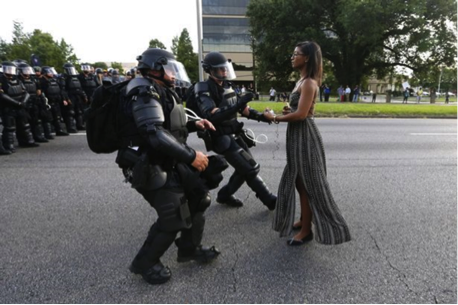 Police arrest a protestor in Baton Rouge, Louisiana in July 2016 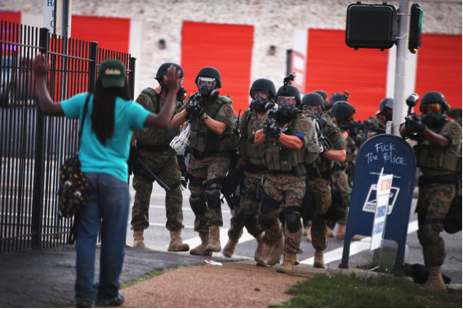 Police in Ferguson, Missouri in August 2014.

Hinton embraces that idea that the war on crime emerged as a backlash to the civil rights movement. She points out that, in the century from the 1865 to 1965, just under 185,000 Americans entered prisons; today, ‘2.2 million citizens are behind bars’ (5). Such figures are damning, but Hinton further argues that when white youths began to be swept up into the system in large numbers in the 1970s, legislators stepped in to pass the Juvenile Justice and Delinquency Prevention Act, with the effect being that many whites were offered opportunities for rehabilitation, while African Americans were disproportionately imprisoned. Hinton does not portray this as deliberate, racist plot. Rather she argues that a shared ‘set of assumptions about race, poverty, and criminal behavior’ influenced government officials of both parties throughout the war on crime (123). Meanwhile, many states disenfranchised felons, resulting in 6 million Americans not being able to vote, including one in thirteen African Americans. While complimenting Michelle Alexander’s The New Jim Crow, which focuses on mass incarceration since 1980, Hinton argues that such trends actually began ‘much earlier’ than Alexander suggests.

Picture taken during the 1967 riot in Newark, NJ

While clearly claiming relevance to current debates, Hinton’s book focuses on this ‘earlier’ period, studying the years from Kennedy to Reagan. Hinton traces how the war on crime developed during those decades and stresses the continuity from one presidential administration to the next. Rather than portraying such policies as conservative, as many have done, she argues that they began during the heyday of liberalism. First, Kennedy launched a first ‘total attack’ on youth delinquency and crime. Johnson, Hinton argues, then ‘expanded Kennedy’s intervention’ (3) by simultaneously launching the Great Society and a War on Crime, putting forth the Law Enforcement Assistance Act the very same week as the Voting Rights Act. As riots erupted in American cities, LBJ began to talk about ‘fighting a war within our own boundaries’ and began to arm police departments with military grade weapons so that the ‘frontline soldiers’ could combat civil unrest (87). Meanwhile, he used law enforcement agencies to spy on African Americans whom he considered to be agitators. Even during the heyday of civil rights, therefore, programs were being implemented to monitor and control African Americans. Subsequent presidents built upon such policies and precedents. Nixon increased funding for the Law Enforcement Assistance Administration thirteen-fold and helped to usher in a new emphasis on incarceration as a deterrent, funding a wave of prison construction. By the Ford years, many were acknowledging that such policies had not reduced crime, but the Ford administration doubled down on incarceration nonetheless, dismissing ideas of rehabilitation, warning of repeat offenders, and calling for new sentencing guidelines. Hinton argues that Carter did little to reverse these trends and instead ‘laid the groundwork’ for Regan’s eventual war on drugs that expanded these programs even further. ‘Rather than a sharp pivot […] Reagan’s policies were’, according to Hinton, ‘more the outgrowth of a process that liberals themselves had developed within a broad political consensus’ (305).

Arguing, reasonably, that state-level studies cannot capture the ‘profound national dimensions of crime control’, Hinton chose to focus her attention on the federal government, crafting a top-down study, one focused almost exclusively on presidents and their close advisors (8). At times this focus on the executive branch seems too narrow. One cannot but help wonder about the sorts of pressures and constraints under which these presidents were operating. For instance, Hinton notes that Johnson signed the DC Crime Control Bill ‘despite his reservations about the mandatory minimum sentences the act imposed’ but does not sufficiently explain the reasons for which he ultimately accepted mandatory minimums (155). Was he responding to media pressure, congressional maneuvers, or public opinion? Interestingly, while Hinton does not spend much time on the press, judiciary, or Congress, she does provide detailed analysis of academic policy advisors such as Daniel Patrick Moynihan, James Q. Wilson, Edward Banfield, and Charles Murray. The attention given to academic advisers fits with the overall argument that racial assumptions were affecting all the policymakers in this so-called war, even the supposed experts. However, it further contributes to the impression that policy was crafted in vacuum, rather than shaped by political pressures and institutional constraints. 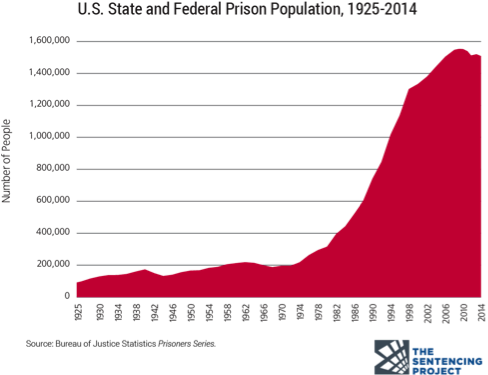 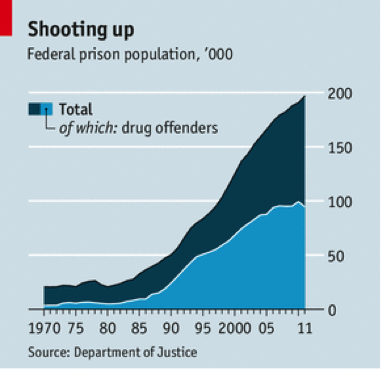 The growth of the American prison population, from VOX and The Economist respectively:

Hinton’s insights and proposals are interesting and provocative. Some reformers today call for the police to ingratiate themselves in communities by using old-fashioned foot patrols and by having the police take a role in youth activities, to improve community relations and straighten out at-risk youths; Hinton makes the case that both of those strategies were counterproductive in the past. Many residents felt as though they lived in occupied territory and police used community programs to scout for future criminals. Instead of increasing the police presence, Hinton argues that ‘residents in communities should be responsible for keeping their own communities safe’ (339). She points to several successful programs that were undercut by officials, such as the Boys Brotherhood Republic of New York and the League to Improve the Community in Chicago, both bemoaning the lost opportunities they represented and suggesting that such programs may provide a way forward.

Brian Kennedy received his Ph.D. in U.S. history from The Ohio State University. He has taught at several universities in the United States and the United Kingdom. He is completing a book about Catholic voters’ response to the New Deal.
View all posts by Brian Kennedy →
Tagged  African American, Black History, C20, C21, Civil Rights, incarceration, prison, Race.
Bookmark the permalink.