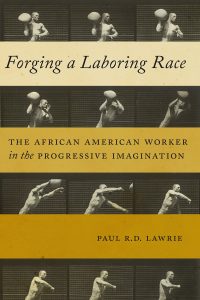 The Progressive Era (1890-1920s) was a time of intense social, economic, and political reform largely carried out by the middle class. Most scholars of Progressivism, including David Thelen and Daniel T. Rogers, argue that Progressivism is not monolithic and there has never been a coherent definition. Paul Lawrie has chosen to focus on one particular aspect of the Progressive Era: the deepening inequalities that occurred due to an industrial and economic boom, causing a rise in racism and racial policy. Lawrie’s book, Forging a Laboring Race: The African American Worker in the Progressive Imagination, examines this era with a focus on the black working body. Lawrie sets himself apart as a scholar of Progressivism by looking at the effects of racial science on Black working life and by including labour history.

Comprised of an introduction, five body chapters, and an epilogue, the book is organized chronologically and spans the period of 1896 to 1929. This is an ambitious project with a complex argument, but Lawrie succeeds in scrutinising the various organisations that sustained white supremacy throughout the era. However, at times, it is hard to find the Black voice in this work because the majority of space is given to the powers that created and sustained racial science.

The introduction opens with the story of Ben Bailey, a boxer without work or prospects, who entered a study at the University of Pennsylvania in 1885. This study was carried out by Eadweard Muybridge and was implemented to study the motion of human bodies, particularly the motion of Black bodies. This introductory anecdote sets up one of Lawrie’s key arguments: the common belief among Progressives that Black bodies were inherently different and in need of experimentation and how these bodies have served as both sites of ‘repression and resistance’ (p.6) in industrial capitalism. Moreover, it shows the deepening inequalities that would push Black Americans to subject themselves to such racially motivated studies.

The first chapter begins at the turn of the 20th century and expertly discusses the connection between insurance and black bodies, an important intervention in the scholarship. During Reconstruction, insurance companies reduced their services to Black Americans because of their supposed higher mortality rates. However, this Black decline was blamed on biological differences and not the effects of inequality and lower quality of life; high rates of conditions such as Tuberculosis were seen as biological and were often used to rationalise hostility to Black laborers. This chapter shows the Progressive-era tendency to ignore the poor living conditions of Black Americans, and how eugenics was used to justify and perpetuate white supremacy.

The ensuing chapters provide Lawrie’s biggest contribution: the impact of World War One and the Great Migration on the Black workforce and on Progressive racial policy. He sees employment in the military as crucial to the wider labour movement. The War served as a ‘catalyst and an agent of black proletarianization’ (p.41). Both the War and the Great Migration made the Black worker an industrial factor across the country. This section states that Black Americans were not only drafted into military roles, but the shipment of white soldiers overseas meant there were numerous vacancies in the workforce that needed to be filled, and Black workers were called upon to fill these vacancies and to help the war effort. However, Lawrie is careful to highlight that this inclusion of Black laborers did not translate to complete equality. For example, only 3% of overseas combat forces were Black and Black soldiers received subpar medical treatment after the war.  Lawrie powerfully challenges the idea that the need for combatants was greater than the desire to maintain white supremacy; he also challenges the common notion that participation in the war effort led to full participation in American society.

Lawrie also rejects a heroic narrative of the Great Migration, a narrative which paints racism as a Southern problem. But the increase in the Black population in Northern cities led to an advance in eugenics and a surge of funding for racial sciences from the National Research Council, sustaining white supremacy. Despite the integration of some sectors during the war, Black bodies continued to be a ‘problem in perpetual need of a solution’ (p.167).

Overall, Paul Lawrie expertly maps the history of Progressive thinking towards Black bodies. His work shows the continued relevance in studying this content: the production of racial difference has been essential to the establishment and maintenance of capitalism. Continuing racism and inequalities show the importance of reading Lawrie’s work. However, Lawrie could have made this point stronger by giving a voice to those that resisted white supremacy and by connecting his work to future Black Freedom movements, such as the civil rights movement or Black Lives Matter. This connection would have even further highlighted the importance of Lawrie’s work.

Anne is a Graduate Teaching Assistant and PhD student at the University of Manchester, researching memorial sites devoted to the American civil rights and black power movements. Anne is also tutor with the Brilliant Club Scholars Programme and an editor of the University of Manchester's student run academic journal, Encounters: Politics, Society, and Culture in the Past.
View all posts by Anne Stokes →
Tagged  20th century history, African American History, Book Review, Labour history.
Bookmark the permalink.