Book Review: Flame and Fortune in the American West

California is always burning, and if it is not burning, it is preparing for ‘the big one’ that will finally rupture the San Andreas fault, the tectonic boundary between the Pacific Plate and North American Plate. Experts have worried over it for decades. Amidst this seemingly inevitable apocalyptic backdrop, Gregory Simon endeavours to demystify the forces that lead to such tragedy. Simon calls his project ‘a political ecology of fire’ (8), which catalogues the ‘persistent suburban growth trends and financial incentives’ (8) that grow along with the fire risk to which many have become accustomed. This being the broad goal, the particular test case is the 1991 Oakland Hills fire, which Simon himself narrowly escaped as a teenager. After ten pages of this first person encounter with fire (told in urgent present tense), Simon peels back to a multi-faceted analysis– encompassing ecology, urban planning and disaster economics–that sustains four sections of the book.

Each section covers a different aspect of fire discourse. Part one covers the specific history of the Oakland Hills fire, Simon’s critical framework and the general context of the American West. Part two analyses the suburban development that maximises fire risk. Part three evaluates the depoliticised way we tend explain fire disasters, and Part four traces policy outcomes relates to fire mitigation and rebuilding. While the topics can range widely, the ideas build on each other. The central concept and contribution of Flame and Fortune is Simon’s coining of ‘affluence-vulnerability interface’ (18), which pertains especially to the suburban spaces particularly vulnerable to fire. ‘AVI’ is to be a supplement to the current dominant discourse, ’Wildland-Urban Interface’ (22). ‘WUI’ is the language typically used by the United States Forest Service and Federal Register. This shift is of great use to policy development, which seems to be Simon’s main thrust, but it also will be of great interest to historians of the American West and anyone who writes about frontiers or borderlands. Fundamentally AVI provides another lens through which to analyse the interaction of settled and unsettled land.

The great success of Simon’s argument is his ability to re-frame and shift the paradigms through which we think about disasters. The language of flammability itself minimises the role humans play as accelerating agents. Simon argues that the best way to confront these seeming acts of God is by ‘confronting the political economic structures, socio-cultural behaviours, and environmental systems that continue to produce, support, and enrich the Incendiary’ (41). If readers are unconvinced by Simon’s rhetoric, they will likely be convinced by his fluent documentation of how the landscape was changed by history, resource mining and suburbanisation. The conceptual mesh is effective, if occasionally a bit verbose. Simon weaves together distinct theoretical lenses without streamlining the vocabulary. These difficulties are balanced out by Simon’s attention to real residents who were displaced.

Simon has impeccable attention to detail when it comes to what we talk about when we talk about fire. He susses out the vague origins of the term ‘firestorm’ (110) and examines such ephemera as duraflame firelogs, pine beetles, climate change, drought, wood shingles, eucalyptus, and regional property rights controversies. By the end of the book, the reader is in danger of losing track of the big idea in the weeds of Simon’s catalogue small-scale local controversies. A wider array of comparative gestures might have been more pertinent than drilling down more deeply into Oakland. Simon’s concepts work to undercut the misunderstandings that arise from the hapless news cycle of armchair disaster analysis. Many places throughout the book I wished Simon would go global and make these connections more pronounced.

While I believe Simon’s hyper-local focus can be obfuscating, it is certainly an advantage when he examines policy. Without all the attention to specifics of Oakland, it would be impossible to look at the small-scale solutions necessary in the aftermath of this kind of disaster. Simon discusses how the city dealt with parking in the wake of bottle-necking along evacuation routes, utility line upgrades and fire hydrant nozzle connections. He also looks into the impact on Oakland’s property tax base, which is a broad analogue for anyone interesting in city revenue streams. In this case, going local is going global.

Simon’s book will only become more and more important as our reckoning with climate change becomes more urgent. It can be easy to dismiss a global temperature adjustment of merely a degree or two, but while adjustment along the mean can seem subtle, the extremes will get more extreme. The ocean will warm and rise, and hurricanes will gestate more readily as a result. Intensifying droughts will amplify the West’s incendiary potential. If we cannot conceptualise our engagement with disaster in the multi-faceted way that Simon does, then we are simply waiting for it to happen. Those desirous of a broader lens than Simon’s might turn to Tim Collins’ Cities, Nature, Development or to other books in the University of California Press’ Critical Environments book series of which Flame and Fortune is a part. Eric Perramond’s Unsettled Waters is of particular interest to those who study the American West. 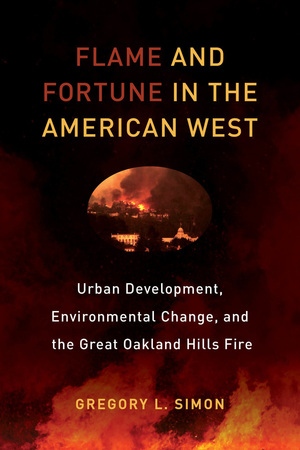 Travis Snyder is a PhD student at Baylor University working in American Literature. His focus is the literature and circumstance of the 20th century, tinged with the theoretical approach of postmodernism. He writes about American foreign policy to unwind. His largely irrelevant tweets may be found at @TravisSnyderI.
View all posts by Travis Snyder →
Tagged  C21, Geography, Politics.
Bookmark the permalink.