Book Review: Fighting over the Founders: How we remember the American Revolution by Andrew M. Schocket 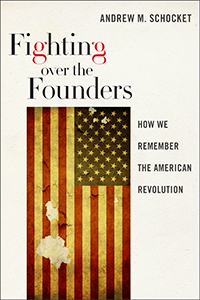 Most readers of this book, scholarly or otherwise, will come to it with prejudices about the Revolution and its meanings. They are likely to find them subjected to healthy and timely challenge, given the recent resurgence of political uses of aspects of the era. Schocket pursues his exploration of “the contemporary memory of the American Revolution” (4) through its manifestations in political discourse, historical biography, museums and historic sites, films and tv series and, in a slightly grab-bag final chapter, court-rooms, contemporary political movements (including the Tea Party) and reenactors. Schocket defines his periods as follows: the historical Revolution covers the 1765 Stamp Act to the 1788 ratification of the Constitution, and contemporary memory encompasses 2000-2012 (with occasional forays outside).

Schocket’s central argument is that all these interpreters of the Revolution can be divided into essentialists and organicists, though there is space for overlap. This is both a question of whether the Revolution had a single meaning at the time it was occurring, and how we apply that meaning to contemporary issues – thus, organicists would see the Revolution as an ongoing process with, for example, development still required to live up to the Declaration, while essentialists might want a restoration of what they perceive as a fixed earlier reality.

I found Schocket’s analysis most satisfying when concerned with the ground I was less familiar with – particularly the historic sites and the reenactors. In dealing with historic sites the tension between representing a complex history and satisfying sponsors and the public is richly conveyed. Schocket also brings out the problematic black experience at these sites, including the often thin representation of their Revolution, the racial imbalance in visitors to the sites, and the persistence of employment disparity (at Colonial Williamsburg, enactors and management are mostly white, service staff mostly black). Shortcomings in the treatment of racial issues across all the media examined are a central concern of Schocket’s, but a parallel concern could be raised about the absence of the Native American and loyalist voices. It is notable that his discussion of the portrayal of the character of Sarah in Liberty’s Kids is entirely concerned with the fact that she breaks the norms of female behavior in ways which would not have been possible at the time and does not mention the significant point that the character ultimately abandons her loyalism.

Elsewhere Schocket’s sympathies were sometimes at odds with mine. In particular, I confess to rather more sympathy with “founders chic”. He has a particular bone to pick with the revival of interest in John Adams and makes strong criticisms of both McCullough’s biography and the subsequent TV mini-series. The revival arguably raised Adams too high, but he was all the same an important figure of the Revolution.

The scholarly apparatus of the book is sometimes surprising for a university press. The Further Readings section is excellent, but the absence of footnotes is frustrating and means that it is not always straightforward to follow an in-text reference to its source (for example Daniel Levin on originalism, 176). More of the methodological apparatus regarding the key word search approach utilised in examining the political speeches, and greater clarity about the selection of history books in Chapter Two would also have strengthened those sections – the central premise of using the New York Times bestseller list is clear, the treatment at the end of works which fall outside that is less so. Given the overall framing of the chapter I found it odd that the discussion of Gordon Wood didn’t mention his book on Franklin.

Schocket’s conclusion expresses the hope that the book will be “a prompt for deeper consideration for when you encounter the American Revolution” (201). In this it certainly succeeds, and the fact that I didn’t always agree with him ultimately supports the book’s point. Having been forced to confront my prejudices, in return I’d suggest he might go back and reconsider one of his – the dismissal in a single sentence here of an older act of memory, the musical 1776. To my mind it responds to gaps this book identifies, including an ultimately pro-independence slave owner giving a full throated defence of slavery (and emphasising north-eastern complicity in it), a trio of ordinary soldiers reflecting on the hazards of war, and an anthem to loyalism. A focus on the founders should and need not preclude attention to the Revolution’s divisions, exclusions, shortcomings and many other participants. Well rounded remembrances of the Revolution will always need room for both Founders and the rest.

Book Review: The Jolly Corner and Other Tales by Henry James and N.H. Reeve
Book Review: The American President in Film and Television: Myth, Politics and Representation by Gre...
Panel Review: ‘Instapoetry and Hypercapitalism,’ BAAS Annual Conference 2021 (Online)
Book Review: American Education in Popular Media: From the Blackboard to the Silver Screen edited by...
Most Viewed Posts of 2016
Review: Seventeenth Annual Conference of the Scottish Association for the Study of America
Book Review: Falling After 9/11: Crisis in American Art and Literature by Aimee Pozorski
Review: Transatlantic Studies Association Conference 2017

Finn Pollard is currently Acting Head of the School of History & Heritage at the University of Lincoln. His most recent publications were on Elizabeth Monroe as first lady and George Washington's standing in surveys of presidential popularity. He is currently working on P.G. Wodehouse and Anglo-American relations.
View all posts by Finn Pollard →
Tagged  American Revolution, History.
Bookmark the permalink.