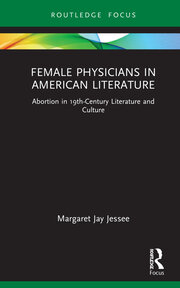 Female Physicians in American Literature: Abortion in 19th-Century Literature and Culture (2022) asserts that it is not the first time in the history of America that previously claimed rights are being revoked and something as grave as overturning Roe v. Wade is put into discussion. This book is a gem that reveals the root of American anti-abortion sentiments in the nineteenth century context and it is amazingly relevant to what is happening to the US in 2022. Margaret Jay Jessee takes the debates on the female physicians and female abortionists in nineteenth-century American fiction to a new level by building a compelling argument that draws on previous scholarship and deploys affect theory to reveal the roots of the ‘fear’ evoked by these characters and its impact on their depiction in the American literature of the era. Furthermore, she extends the discussion by drawing on the general ‘ugly’ portrayals of a wider range of ‘women who transgressed the prescribed gender roles of the time’ (47). Jessee draws on various affect theorists such as Silvan Tomkins, Eve Kosofky Sedgwick, Brain Massumi, and Lauren Berlant to create a framework based on affect theory to approach the main research question of her study.

Affect theory has enabled this study to delve deeper into the sociological and cultural formation of emotions revolving around abortion, female abortionists, female physicians, and other radical female characters who challenged their society’s imposed values and boundaries and resisted being situated in conventional domestic roles. Given the organised structure of the book which consists of four chapters besides an introduction and conclusion, and its meticulous drawing on previous scholarship, it will assist a variety of researchers interested in American or affect studies while being an enjoyable read. Studying the link between the accessibility of abortion in the US with xenophobia, racism, and misogyny in nineteenth-century America is one of the most promising points of the book that strengthens the debate. While the book explicitly discusses nineteenth-century American society and fiction, it is well aware of the ongoing legacy of white male supremacy in today’s America.

Before discussing the literary works, the book elaborates on the situation of female abortionists in nineteenth-century America and explains the impact of the ‘sensationalised’ press on the literary depiction of female physicians and abortionists. The book’s first chapter provides necessary context and shows that easier access to abortion in the nineteenth century started to seem appealing to married white Protestant women who desired to have fewer children. Jessee further discusses how white woman’s inclination towards abortion challenged white supremacy by threatening nationalism which was interwound with masculinity:

Thus the Anglo-American middle class woman would have fewer and fewer children while immigration was growing substantially. Abortion, then, represented the end of white nationalism, and women were both providing abortions as well as receiving them. (19)

The book first introduces Madame Restell, a famous real-life abortionist who ‘was deemed a threat to the Anglo-American protestant middle-class’ (23) and impacted the nineteenth-century sensationalised literary depictions of female physicians in the ‘fiction penned by Ned Buntline, George Lippard, and Andrew Jackson Davis. Female Physicians further elaborates how the reform novels of Louisa May Alcott, Lily Devereaux Blake, and Annie Nathan Meyer portrayed female physicians as strong professional women. Moreover, it distinguishes sentimental and ‘sensational’ novels because they ‘employ emotion in strikingly different ways’ (48). Jessee asserts that ‘for a writer like Alcott, social activism is not the result of evok­ing fear. Instead, sympathy is the means to political change, especially for women’ (48):

Alcott crafts precisely the type of woman whose desire to practice medicine does nothing to disturb Anglo-American nationalism in her short piece, “Happy Women.” (49)

Realist novels create liminal spaces that the women physician characters can only escape through sacrifice; they must either sacrifice their careers in order to maintain their category as a woman, or they must sacrifice marriage (and thus presumably children) in order to inhabit the professional space. The characters are liminal generically as they often become either sentimentally sacrificial or unrealistically unsexed. (61)

Regarding the portrayal of female physicians in realistic novels, the book elaborates on the disctinction between female- and male-authored portrayals by pointing out the patriarchal view adopted by Howells that women physicians ‘are called to the profession by sentiment rather than professional goals’ (75) which makes them vulnerable and calls for masculine protectors.

Female Physicians in American Literature significantly contributes to the discussion of science and medicine in American literature by presenting an inclusive study highlighting several critical concepts in nineteenth-century American fiction. In conclusion, Jessee’s book is an enjoyable read and a valuable source that discusses critical issues  in nineteenth-century America and casts light on the root of several current issues without directly addressing them.

Midia Mohammadi is a PhD student at University College Dublin. Her project, entitled “Narcissistic Women In Search of Lost Selfhood: A Study in Late Nineteenth and Early Twentieth Century American Fiction,” is an interdisciplinary project that inspects the figure of the narcissistic woman in modern American fiction. She has been a member of the Irish Association for American Studies since 2021. Midia interned for #DouglassWeek2022, a collaborative event series organized by prominent scholars and activists in the US and Ireland that celebrates the arrival of Frederick Douglass in different countries around the world.
View all posts by Midia Mohammadi →
Tagged  Book Review, C19 Literature, Medical Humanities.
Bookmark the permalink.