Book Review: FDR in American Memory: Roosevelt and the Making of an Icon by Sara Polak 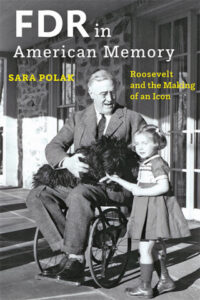 In FDR In American Memory: Roosevelt and the Making of an Icon, Sara Polak evaluates how President Franklin Delano Roosevelt’s image was constructed to resemble that of an American icon. In thematic chapters, Polak examines the changes and key points of Roosevelt’s public image, and also the individuals that created it. She persuasively shows how Roosevelt’s public image, and its shaping, still allows for him to be considered as one of America’s most popular presidents, over 75 years after his death.

Polak’s work remains key in discussing the scholarship of America’s memory of the New Deal, but also sheds further light on the tools that were, and continue to be, used by American presidents to ensure that their legacy would remain for several decades. Building on FDR’s World: War, Peace, and Legacies (Woolner, Kimball and Reynolds) and Leuchtenburg’s In the Shadow of FDR, Polak builds on the legacy of Roosevelt.[i] However, she further focuses on the cultural memory of Roosevelt, placing the work in its own distinctive field by discussing Roosevelt’s transition from ‘politician to statesman to icon’.[ii]

Polak firstly examines how the construction of Roosevelt’s image by individuals from his office, and also from his wife Eleanor Roosevelt, allowed for him to be built up and framed as an American leader. The latter part of the book focuses on the view of Roosevelt from a twenty-first-century vantage point. Drawing on artefacts, including that of memorials, novels and documentaries, Polak demonstrates that, even posthumously, Roosevelt still retains an image of a modern and powerful American leader. Polak shows how the New Deal, and Roosevelt himself has become ‘depoliticised’ through the use of political culture (in films such as Annie) and cultural buildings, such as the Golden Gate Bridge in San Francisco.[iii] It is these ideas that have affected how Roosevelt is perceived, both by those who were alive during his presidency and those who were not.

The ideas developed by Polak allow for this work to be given a key point in the historiography and memory (and indeed in some cases, memorialisation) of Roosevelt and the New Deal. It contributes to the scholarship in a way that very few scholars had done so previously, and in such a way develops new and exciting ideas. This includes the cultural memory of Roosevelt as a disabled individual, which has allowed for many Americans, according to Polak, to remember Roosevelt as a disabled president.[iv] These connotations have been ‘crucial’ to the memorialisation of ‘FDR’s success as a president’.[v]  It is this that very little scholars have failed to argue, with them instead focusing on the political memory of Roosevelt.

Through focusing on the historical memory and placing this into the fields of disability history and popular culture, Polak cleverly assesses the impact that Roosevelt not only had on these areas but also on how popular culture did (and still does in some retrospectives) place him at the centre as one of America’s greatest presidents.

The book’s first section questions the memory of Roosevelt as an individual, while the other addresses the cultural memory of his image. Other members of Roosevelt’s cabinet, such as Frances Perkins (United States Secretary of Labour, 1933 – 45) and Harry Hopkins (a trusted adviser to Roosevelt, and Administrator of the Works Progress Administration), are mentioned throughout the piece; however, others who are arguably as prominent, such as Mary McLeod Bethune, are not discussed. In addition to this, race is not discussed, nor is it acknowledged how African Americans supported or remember Roosevelt; its inclusion may have had the potential to change the overall rhetoric and understanding of Roosevelt’s memory.

Polak argues that the presentation, and indeed remembrance of Roosevelt ensured that he represents ‘several aspects of [the] American Identity’ including that of the American dream, and ‘that fairness and democracy must prevail’ in America.[vi] It is these ideas that have Polak notes have become more prominent through the use of fictional works, such as the films Pearl Harbour and Hyde Park on Hudson, which have ensured that even American citizens who did not live through Roosevelt’s presidency can ‘also generate memories […] which can then become part’ of the overall cultural memory of the New Deal.[vii]

Polak concludes that ‘the image of Franklin Roosevelt as an icon and architect of modern America prevails in American cultural memory in some form or another’, and that this as such allows for him to be considered in such a light that few presidents have achieved.[viii] Polak had the potential to focus on other aspects of Roosevelt‘s presidency, which includes how he is remembered amongst individuals of colour, with her instead choosing to focus on the remembrance of Roosevelt  through a generalised, unspecific view of “the American public”. However, this is not the true aim of Polak’s work, with her instead offering readers a comprehensive understanding of the impact of cultural memory. It is this memory that is often among the most complex of any American president.

Emma Rhodes is a PhD student at the University of Leicester. Her research focuses on women of colour and the Works Progress/Projects Administration in the US South. Emma is also a PGR Representative for Historians of Twentieth Century US (HOTCUS) Postgraduate Secretary.
View all posts by Emma Rhodes →
Tagged  Book Review, Franklin D. Roosevelt, Presidents, reviews.
Bookmark the permalink.