The University of Chicago Press, £28 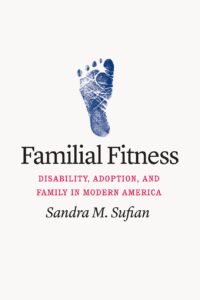 Sandra M. Sufian’s Familial Fitness examines the complex role of disability and divergence in US adoption practices from the Progressive Era to the end of the 20th century, trying to “understand past structures and forces that enabled or impeded the integration of children labelled disabled”.[i] In doing so, she incorporates an extensive archive that reveals the changing policies, practices, and attitudes toward the adoptability of children labelled disabled. By tracing which children were deemed eligible to enter the adoption system, she also reveals how social perceptions of disability reflected in adoption practices and ultimately resulted in drastically different material implications.

In her analysis of the path from exclusion to the partial inclusion of children labelled disabled in the adoption process, she highlights the role of risk assessment. While risk minimization has always played a decisive role, it is particularly informative how risk was related to and assessed by the individual parties (adoptive children, adoptive families, adoption professionals) as it yields interesting insights not only into the social position of disability but also into the social construction of the “normal” family. Thereby, she reveals how, “for the American public, the child figured as the object of parents’ and society’s desires” and how “Americans bestowed ‘the child’ with societal and personal meaning, aspirations, projections, and expectations”.[ii]

Already in the introduction, Sufian shows that she is aware of the limitations of her study. She notes that the voices of the children labelled disabled remain relatively silent in this book.[iii] This is unfortunate, especially as it perpetuates the lack of representation of those affected, yet again depriving them of agency. However, Sufian remarks, self-reflectively, that this absence is due to a methodological problem, namely the fact that the voices of the children labelled disabled have not found their way into the archival material. Furthermore, Sufian underlines the multiplicity of perspectives that surface, particularly emphasizing how the experiences of adoptive families have furthered the transition toward more inclusion.[iv] Generally, Sufian displays a high degree of self-reflexivity concerning the shortcomings of her study. Yet, a more in-depth examination of intersectional impact factors would have been of interest for contemporary readers. While she mentions the factor of race, a more in-depth discussion or, respectively, a note on the omission of such a discussion, would be helpful.

Sufian is able to bring her observations to life once she inserts quotes from historical documents, such as case files, newspaper articles, and official statements of adoption advocates, agencies and political representatives. These bear witness to her analysis and oftentimes strikingly underline the severity of the social perspectives toward children labelled disabled. While it becomes clear that Sufian examined an extensive corpus and made many detailed observations, the book would have benefitted from including more direct quotations. Still, the high density of information at times renders the book a tough read. In that respect, chapters read redundantly as she repeats her previous observations to enrich them with small details in the next step. Nevertheless, the book is very rich in information and detail, and it will serve useful to anyone who researches the history of adoption practices in the US as well as the history of the stigmatization attached to children labelled disabled.

Sufian’s study provides an extensive, well-researched foundation for further, very necessary examination of the cultural history of adoption practices, the social role of and dealing with children labelled disabled.[v] Familial Fitness tells a story that situates the fate of these children at the heart of social shifts in the US. Especially two narratives are important to be read as specifically American and merit further critical research. Firstly, an analysis of changing risk narratives, from risk minimization to risk acceptance, and, secondly, of the “overcoming narrative” will help to connect adoption practices to social transformations, especially concerning the social perception of disability.[vi] Eventually, her final chapter, entitled “A Usable Past”, differs from the main body of the text as it relates her observations to the present moment. In that chapter, her analytic voice turns toward a more politically engaged tone as she summarizes how the takeaways from the past can translate to a more inclusive policy making. By listing the aspects that matter most in catering to adoptive children’s needs (research, coordination, conceptualization, practices, advocacy, community, personal stories, and inclusion), she leaves the reader with the certainty that we must urgently learn from the past and that there is still much work to be done.

[iv] Sufian notes that her approach aligns with Aly Patsavas’ concept of disability analytic, “a form of scholarly analysis that utilizes a critical disability studies lens that always considers the multiple interests of, and impacts on, disabled people” (ibid, p.22).

[v] In the final sentence of the book, Sufian combines a call for further investigation from different disciplinary angles with the social function that these analyses perform to work toward inclusion: “The historical trajectory I trace suggests that without the full inclusion of disability and disabled children in the sphere of family, the social, political, economic, and cultural inclusion of people with disabilities in American society will very likely remain limited” (ibid, p.252).

[vi] The “overcoming narrative”, which Sufian criticizes considerably, implies that “the essential formula […] for people with disabilities is that to rehabilitate their presumed spoiled identities, they had to overcome their limitations, avoid self-pity by being constantly cheerful, be brave, cope and strive well, and inspire the nondisabled to escape social invalidity” (ibid, p.103).

500 Shades of Blues: 'Bluesologist' Gil Scott-Heron’s “H2Ogate Blues” as Meta-performance
William Faulkner by Kirk Curnutt
60 Seconds With Zalfa Feghali
“Exceptional Zombie Cannibals” – Antonia Bird’s 'Ravenous' (1999) and the discourse of American exce...
Storify of our #Bookhour on ON SUCH A FULL SEA by Chang-rae Lee
60 Second Roundup: BAAS Executive Advice for ECRs
From Lemonade to the Louvre: Beyoncé and Jay Z’s Contestation of Whiteness and Showcasing of Black E...
Teaching Radicalism

Juliane Gamböck-Strätz is a Ph.D. candidate in American Studies at the University of Mannheim. She holds a Master of Education from the University of Potsdam as well as a Master of Arts from Clark University, Worcester, MA. In 2015, she was awarded a Fulbright Scholarship. Since 2020, she is a member of the research network “The Failure of Knowledge – Knowledges of Failure.” In her dissertation project, entitled “Corporeal Battlegrounds. Laboring Bodies in Late Capitalism,” she analyzes how contemporary US novels critique normalized late capitalist assumptions about work through the depiction of laboring bodies.
View all posts by Juliane Gamboeck-Straetz →
Bookmark the permalink.