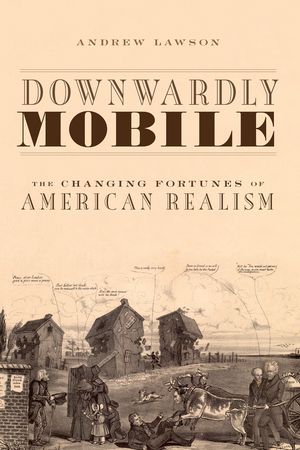 In Downwardly Mobile: The Changing Fortunes of American Realism Andrew Lawson traces the origins of literary realism to a fear of downward mobility that stemmed from the economic uncertainty caused by the growing instability of material wealth and the destabilising effects of the credit and market system. For Lawson, realism is a concrete genre that responded to a very un-concrete, pervasive economic anxiety. “The economically insecure and socially vulnerable self,” Lawson explains, seeks a “psychic mooring” expressed in “realism’s search for the tangible.” This “mooring” is a “search for a secure point of identification.” (37) Lawson argues that this uncertainty created the desire for a realist aesthetic that would “give shape to a diffuse, opaque world… arrest for a moment the market’s chaotic flow of goods, people, and information.” (17)

Focusing on the Panic of 1837, Lawson looks to economic and social history as well as biographical and psychological sources to explain how the resulting psychological trauma of the event shaped the evolution of American fiction from the 1860s through to the 1880s. “The lesson of the Panic,” he writes, “was that all fortunes, and indeed all things, are in essence fungible.” The Panic created as a result a “preference for what is local, particular, and concrete rather than what is universal, unbounded and abstract.” (4) Lawson employs the realist convention of showing how larger social structures affect the individual, while stressing both the material conditions underwriting social experience and the structure of feeling they caused. 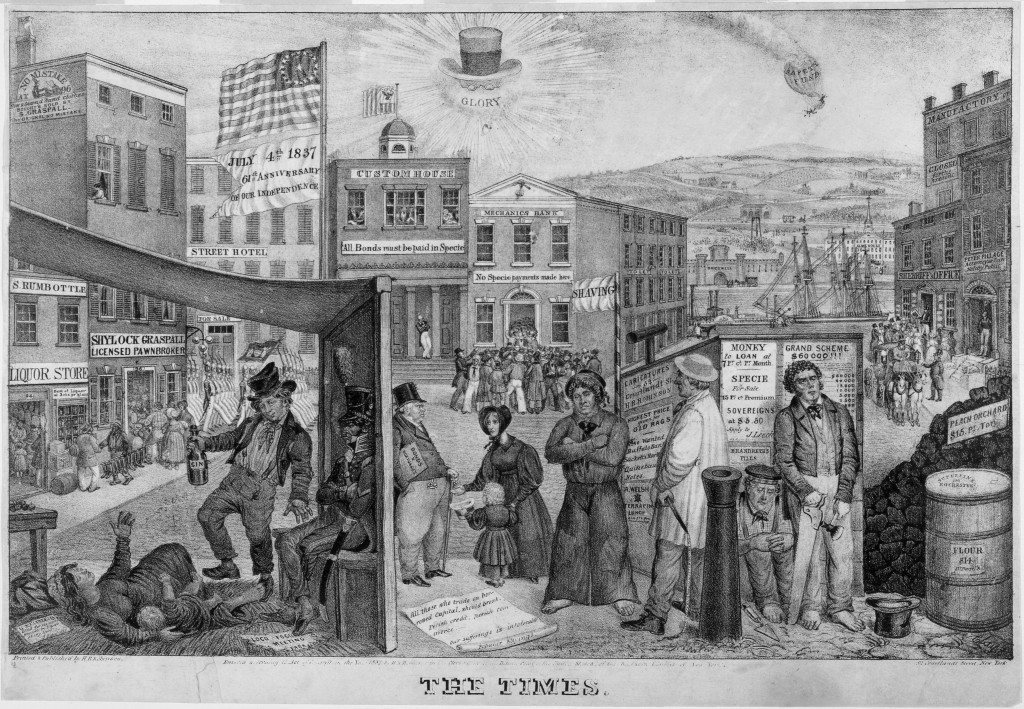 The Times, 1837 U.S. caricature on the financial panic of that year by Edward Williams Clay

Across five chapters, Lawson presents detailed readings of such canonical realists including Henry James and William Dean Howells as well as lesser read authors such as Rebecca Harding Davis and Hamlin Garland. Each of these authors, he argues, experienced economic uncertainty in their lives, and consequently suffered from anxiety regarding their financial stability and social status.

Lawson presents William Dean Howells’ hypochondria and chronic vertigo as a “psychological symptom of the economic and geographical upheavals suffered by his family in their extended downward slide.” (67) Howells’ desire for solid ground becomes social, physical and psychological. Lawson then traces these threads through Howells’ writing. Similarly, Lawson argues that Henry James’ accepted social identity begs critical adjustment when we consider that James’ lifestyle was maintained through inheritance rather than work, with the consequence that he was constantly worried about the depletion of his family fortune. The resulting anxiety manifests, according to Lawson, in James’ artist characters, such as Roderick of Roderick Hudson (1875), who often fear or experience a depletion of their inspiration, becoming impotent both in the market and within themselves. 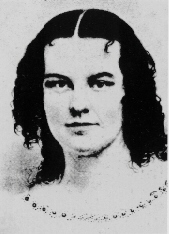 Lawson explains that downward social mobility particularly affected women of the gentry class, leading some to enter into the literary marketplace. Rebecca Harding Davis, for example, was educated yet financially disadvantaged, allowing her to both successfully appeal to an educated audience while identifying with the plight of the lower classes in a new figuring of sentimental literature. Lawson explores how Davis in Life in the Iron Mills (1861) employs direct address to position her audience as outsiders and her narrator as an insider in the lower-class world.

By analysing each author’s biography and their employment of psychological metaphor and symbolism, and by connecting their artistic vision to contemporary social writings and economic events, Lawson presents a detailed exploration of each author’s motivations and impact on the development of realism in American literature. He effectively identifies the emerging market economy as creating two distinct crises: an economic crisis that threatened the displacement of the gentry/middle class through the instability of the market, and an epistemological crisis in which the abstraction of the market made it difficult to pinpoint what was real and tangible. These crises motivated the mimetic writing of each of these authors.

Lawson rejects the poststructuralist suspicion of the feasibility of realism’s mimetic ambitions, and confronts what Eric Hayot has called “institutional time.” In resisting the  standard narrative that locates the rise of realism in the 1880s, Lawson reminds us that the signature features of realism, its emphasis on detail, for example, were part of American fiction before the Civil War, expanding the reach of realism to include the 1850s as well as the overlooked decades of the 1860s and 1870s. Equally importantly, Lawson’s book brings up questions of the relationship critics can or should posit between an author’s experiences and the works he or she produces, and how the social construction of American realism might be made to accommodate the agency or action of the author as a specific individual rather than as the voice of his or her generation or culture.

Joanne Mildenhall is a final year PhD candidate and Associate Tutor in the School of Art, Media and American Studies at the University of East Anglia. Her thesis looks at ways in which the natural environment influences and defines political and social ideology in mid-Nineteenth Century American literature, particularly in regard to the work of Henry David Thoreau.
View all posts by Joanne Mildenhall →
Tagged  American Middle-Class, American Working Class, C19.
Bookmark the permalink.