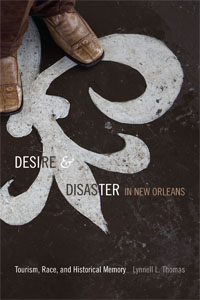 The most striking feature of Lynnell L. Thomas’s book Desire and Disaster in New Orleans: Tourism, Race, and Historical Memory is the author’s exhaustive and intimate knowledge of her subject matter: namely, the city of New Orleans. Thomas’s familiarity with the cultural and physical geographies of the city is evoked throughout the text and serves as a solid basis for her thoroughly researched argument surrounding the problematic representation of New Orleans in tourism narratives. Thomas’s study judiciously hinges theoretical concepts of race and identity with an empirical approach grounded in the author’s first-hand experiences of the tourist industry in New Orleans. In her acknowledgements, Thomas notes that this work is the result of almost a decade of research and observation, a fact that is evidenced by her extensive knowledge of the subject matter, both at an abstract and concrete level. Thomas’s proximity to the subject she narrates, while unmistakably endowing her with perceptible authority, is nevertheless a point worth noting. While this subjectivity is not unequivocally positive or negative, it inevitably has an effect on the author’s approach to the topic and should be considered in any evaluation of this text.

However, Thomas’s methodical approach to revealing and challenging the troubling representation of New Orleans through the lens of tourism is a timely and important piece of work as we near the ten year anniversary of Hurricane Katrina. The distorted and troubling representation of predominantly black New Orleanians in national and international news coverage in the wake of Katrina is the catalyst for this study, as Thomas outlines how deeply embedded racial division and inequality in the city ultimately “paved the road to the damage inflicted by Hurricane Katrina” (Thomas 2). Thomas pivots her study around representations of New Orleans as a place of hedonistic conviviality, multicultural exchange, and racial ambivalence – a representation Thomas sees as extremely problematic. The promotion of New Orleans as a multicultural melting pot of racial harmony belies the existence of a city intensely divided along racial lines both culturally and socio-economically. The unequal distribution of wealth, education, and aid, both during and after Katrina, in what Thomas identifies as tourist and non-tourist areas of the city, is indicative of this division.

The book discusses the ways in which pre-Katrina tourism narratives of multicultural equality contributed to framing the skewed national and international response to Katrina. Thomas asserts that the unequal distribution of wealth and public spending meant that predominantly black, non-tourist areas of the city were most severely damaged by the storm. Funding that should have been used to bolster levees around areas such as the Lower Ninth Ward was spent on infrastructure in tourist sectors of the city, i.e. the famous French Quarter.

Thomas considers the various colonial and capitalist influences that gave rise to the complex racial make-up of the contemporary city. Thomas outlines her opposition to the construction of New Orleans as “cosmopolitan” or “multicultural”; she argues that such representations falsely promote the idea of racial harmony and downplays the racial, cultural, gendered, and economic conflict that has circumscribed the city since its original inception. 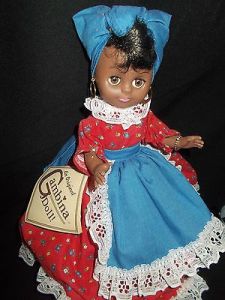 Gambina Dolls or “servant dolls” sold in gift shops. An example of the racialized iconography of New Orleans

Thomas balances her research with a combination of historical and empirical investigation. Thomas’s first-hand account of the various bus tours, tourist companies and organisations, websites, brochures, and other paraphernalia that endorse New Orleans as a tourist destination supports her assertion that the harmonious multicultural representation of New Orleans is not only problematic, but fundamentally disturbing. The tendency by certain bus tour companies to promote a romantic description of life in the ante-bellum South actively disregards and, to a large extent legitimises, the practice of slavery, often describing indentured people as acquiescent “servants” rather than slaves, perpetuating a misconception that slavery in Louisiana was somehow more egalitarian and dignified than elsewhere in America. Thomas notes that a handful of tour companies attempt to offer an alternative, more sincere version of New Orleans’s history as a strategy of resistance to dominant, racially imbalanced tourism narratives. This is achieved to varying degrees but ultimately Thomas is not satisfied that these tours manage to fully subscribe to the counter-discourses they propose.

Desire and Disaster in New Orleans tackles skewed representations of slavery and the racially imbued history of New Orleans that is denied in mainstream tourist discourse. The work responds to an increase in scholarly attention in the study of tourism as an ideological, neo-colonial capitalist practice that developed in the wake of colonial decolonisation and rapid globalisation in recent years. The recognition of racial and socio-economic inequality in practices of tourism can help to counter damaging ideological discourses perpetuated by the tourist industry, which is essentially what this work seeks to do. This is a well-researched, opportune, and useful niche study of the neo-colonial tourism industry and the profound effects it can have on both a micro and macro scale.

Review: Black Art, Black Power: Responses to Soul of a Nation
Review: IAAS Postgraduate Conference, 'E Pluribus Unum: Out of Many, One'
Book Review: Burroughs Unbound: William S. Burroughs and the Performance of Writing edited by S. E. ...
Review: 'Civil Rights Documentary Cinema and the 1960s: Transatlantic Conversations on History, Race...
Book Review: Literature and the Law of Nations, 1580-1680 by Christopher N. Warren
Review of Historians on Hamilton: How a Blockbuster Musical is Restaging America's Past, edited by R...
Book Review: Awakening: How Gays and Lesbians Brought Marriage Equality to America by Nathaniel Fran...
Review (Part One) of IAAS Annual Conference

Aoife M. Dempsey is a second year PhD student and Peter Irons scholar in the School of English, Trinity College, under the supervision of Professor Darryl Jones. Her doctoral research is focused on exploring the postcoloniality of nineteenth century Gothic fiction, comparing Anglo-Irish writers and writers from the American South and West. Other research interests include Modernism, Irish language poetry, fiction and folklore, American fiction, Feminism, and cultural theory. She completed her B.A. at the University of Limerick in 2010, and her M.A. at the University of Leeds in 2012.
View all posts by Aoife Dempsey →
Tagged  African American Culture, C21, Cultural History, Politics.
Bookmark the permalink.