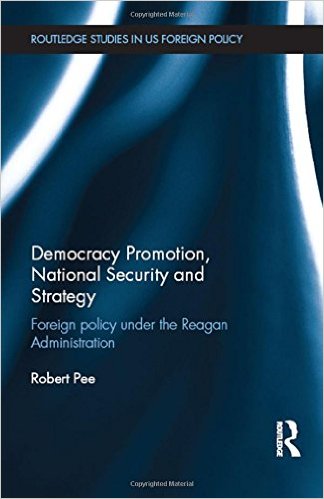 Robert Pee’s recent publication on democracy promotion in the Reagan era commences by asking the following question: was democracy promotion under Reagan a key element of US strategy or merely democratic rhetoric used to legitimize the pursuit of other goals? This dialectic – which becomes the cornerstone of the book – is frequently referenced throughout what is essentially a historical account through case study of US democracy promotion policy in the latter part of the twentieth century. Pee’s account spans the covert operations of US democracy promotion against the Soviet Union alongside the modernization policy of Third World countries in the 1950s, 60s and 70s, to the implementation of the National Endowment for Democracy (NED) in the 1980s.

The era that Pee covers was, of course, one of high political and cultural tension, thus the arguments that he elucidates in Democracy Promotion are often controversial and heavily mediated by particular political and social persuasions. It is therefore refreshing to find that Pee’s opening chapter recognizes many of these tensions and seeks to forge a path between them. While it may initially seem antithetical for a book sub-titled “Foreign policy under the Reagan Administration” to begin its analysis with George Kennan’s state-private network operations in 1948, the preparation work that Pee puts into the first chapter surrounding these covert enterprises, as well as the attempted modernization policies of the Third World, offers an interesting and useful foundation from which to build his central argument surrounding Reagan.

From then on, Pee begins to outline his account of democracy promotion in the 1980s. In particular he focuses on establishing a narrative epitomized by the failure of Reagan’s administration to successfully negotiate the problematic balance between opposing liberal and neoconservative strategies. In doing so, he highlights – quite lucidly – the inability of strategy to suitably combine a Reaganite focus on weakening the Soviet Union with the State Department’s preoccupation with strengthening containment.  The account develops to include an assessment of other failures under the Reagan administration, including its obsession with linking democracy promotion to its national security objectives and the failed Project Democracy proposal in 1983. The book concludes with a comprehensive evaluation of the foundation of the NED and its implementation between 1984 and 1986.

Pee’s account attempts to hold a balanced, critical eye over the State and non-State networks involved in US democracy promotion. While at times guilty of slipping into concision (his description of Reagan’s Westminster address in 1982 springs to mind) for the most part, Pee manages – quite skillfully at times – to maintain a suitable enough balance to provide incisive and prescient conclusions. Ultimately, for Pee, the era of democracy promotion under Reagan was flawed, not because of its intentions, but because it did not build itself on a, ‘unified and coherent blueprint’ (6). The result, the NED, presented a rather awkward hybridity which sought to promote, ‘liberal political methods and structures’, in an effort to reform problematic regimes with US security interests on a case-by-case basis, ‘through an organization influenced by the US government but not fully controlled by it’ (6).

It is at this point that one must highlight a minor dissatisfaction, for if Pee’s account can be praised for its balanced critique, then it can also be criticized (at times) for a failure to narrow towards any defining conclusions. The NED is a case in point. Pee’s introduction outlines many of the NED’s failures, but later he argues that, from a broad perspective, the network was a success. Pee praises the NED’s bipartisan angle for instance – which allowed the Legislature involvement in foreign policy – but also decries the NED’s ‘weak powers’ (65), claiming that its ad-hoc nature failed to provide any future shape to democracy promotion. Perhaps such a critique comes from a reviewer searching for an encapsulating statement, but one often finds the author caught between two stools and longs for him to settle on one. Perhaps the closest we can get to a defining conclusion is that Pee presents the NED as being hamstrung by its inability to successfully negotiate a path through the plethora of political opinions in the 1980s: whether to campaign against the Soviet Union, to promote democracy in friendly or hostile dictatorships, or to provide a more ideologically “pure” campaign untied to any foreign policy interest.

One would have been equally happy to see Pee’s account (and this is perhaps again coming from a point of personal interest) to move beyond the political sphere. Despite early indications that there may be an examination of the argument that suggests that much of the US’s foreign democracy promotion at the time was tied to economic and trade interests, any development along these lines fails to materialize. One cannot help but notice the lack of comment surrounding the US’s change in fiscal policy under Paul Volcker in the 1980s which aided the proliferation of neoliberal foreign policy, and arguably facilitated the overturn of Mexico’s socialist government in the 1990s and the implementation of NAFTA.

Notwithstanding these omissions, Pee’s book provides a thorough and extensive analysis of the policymaking that spans much of this important period of recent history. His argument is consistently and logically written. Each chapter is broken into a number of useful sub-headings, and the final conclusion to each section helpfully provides a snapshot to the preceding segment. While the full impact of Pee’s study remains to be seen, one imagines its uses and influence will be wide, from those wishing to gain a solid grasp of Reaganite foreign policy, to those who may use it as a historical account of the relationship between the Executive and Legislature in the 1980s, or even – bearing in mind the excellent sub-headings – as a useful reference library which can be dipped into at any point. In all, Pee’s account offers a comprehensive and sophisticated presentation of the sources of tension that surrounded US democracy promotion in the 1980s.

Review: ‘The “Not Yet” of the Nineteenth-Century U.S.’, British Association of Nineteenth Century Am...
The Best of 2016, and What's next in 2017
BAAS 2022 Panel Review: ‘Considering Presidential Legacies: Reagan and Trump’
Book Review: State of Recovery: The Quest to Restore American Security after 9/11 by Barry Scott Zel...
Book Review: Wallace's Dialects by Mary Shapiro
Book Review: Phantoms of a Beleaguered Republic: The Deep State and the Unitary Executive by Stephen...
Book Review: American Education in Popular Media: From the Blackboard to the Silver Screen edited by...
Review: Russia in American Literature

Dr Jonathan Pountney currently holds two part-time teaching positions: one at the University of Manchester, the other at Lancaster University. He is an editorial board member of the Raymond Carver Review, and his monograph, The Afterlife of Raymond Carver: Residual Craftsmanship in the Neoliberal Era is due for publication next year.
View all posts by Jonathan Pountney →
Tagged  20th century history, Foreign Policy, Politics, Presidents.
Bookmark the permalink.