Book Review: Chemical Heroes: Pharmacological Supersoldiers in the US Military by Andrew Bickford 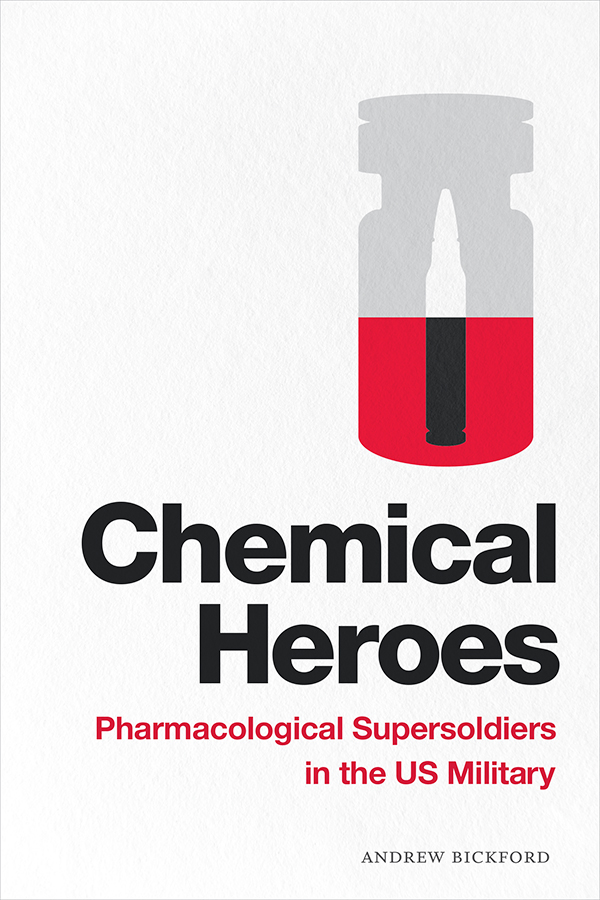 Supersoldiers are often found in comic books and cinemas, but anthropologist Andrew Bickford covers the real attempts to bring the hero off the page and into reality. Chemical Heroes follows the development of the US military’s efforts to biomedically enhance their soldiers in response to the prediction that the future of warfare is a pharmaceutical battlefield. Unlike other scholars, such as Kenneth MacLeish[i], and Paul Scharre and Lauren Fish[ii] who have examined the experience of using external body armour being developed by the US military, Bickford instead analyses the sociocultural implications of internal biological armour; that is, performance enhancements embedded into the body. He argues that the goal of internal armour is to create a dependable military labour, while simultaneously glamourising the soldier through links to mythical and pop culture heroes such as Achilles or Captain America.

Spanning from early iterations of the supersoldier during WWII by German and Soviet forces, to present day American attempts, Bickford tracks the development of internal enhancements as ideals and realities. The current US army is an all-volunteer force, with soldiers deployed more often now than ever, and ever-changing performance enhancement drugs have been supplied since WWII. With the continuation of the war on terror, enhancements aim to keep soldiers at the frontline for even longer. A large reason for performance enhancement is also the ‘specter of cowardice’ (245) that lingers through the military’s many concerns regarding soldiers’ fear and empathy that has been constant since the idea of internal manipulation. The military distrusts the fragile body and mind of the soldier, which is both the ‘prompt and the problem’ (27). Thus, attempts to advance natural biology is underway to ensure protection further than currently viable. However, this also compels the soldier into engaging with environments and situations previously marked as too dangerous. Through performance enhancement, the body becomes a site of direct manipulation and militarisation. The bioethical problem Bickford examines is what constitutes permissible soldier enhancement. 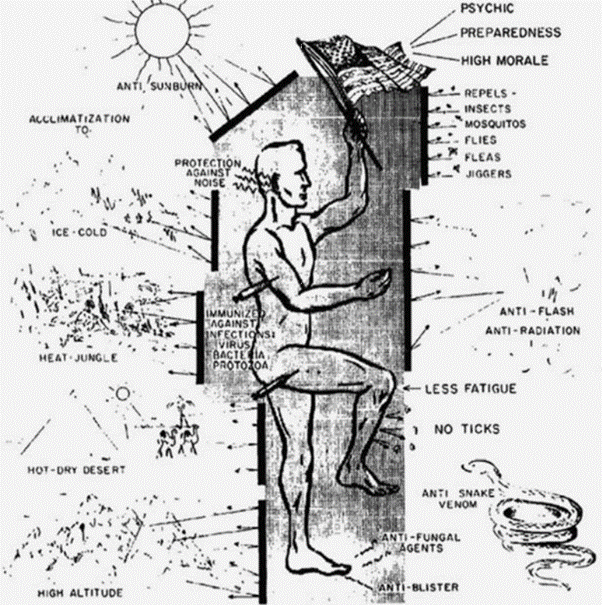 The story of these supersoldiers is told in three parts, using tables, diagrams and direct quotations from military bodies or programs. Part One focuses on thematic framing, as Bickford explains the differentiation between skin-in and skin-out enhancements, i.e. vaccinations versus physical body armour, with Chemical Heroes following the development of the former. He also explains the concept of ontopower, where power is derived from pre-emption and utilised as a weapon. Much of the book reiterates that the process of biological performance enhancements is done in anticipation of its need, as war is played out between the memory of previous wars and imagined future wars.

Part Two comprises the early construction of the US Supersoldier, from WWII to the 1970s. We are introduced to Dr. Marion B. Sulzberger, a military researcher and dermatologist, whose work, Idiophylaxis — on imbedded biological armour — marks the milestone of the US military’s emergence of synthesising technologies to protect and improve soldiers. Sulzberger lays the groundwork for projects the US continues to develop and trial today. Part Three examines the modern US supersoldier and current drugs used to enhance soldiers, such as amphetamines given to pilots flying long distances. In this section, Bickford discusses consent within the military regarding internal enhancements, and the difficulty surrounding a soldier’s choices. 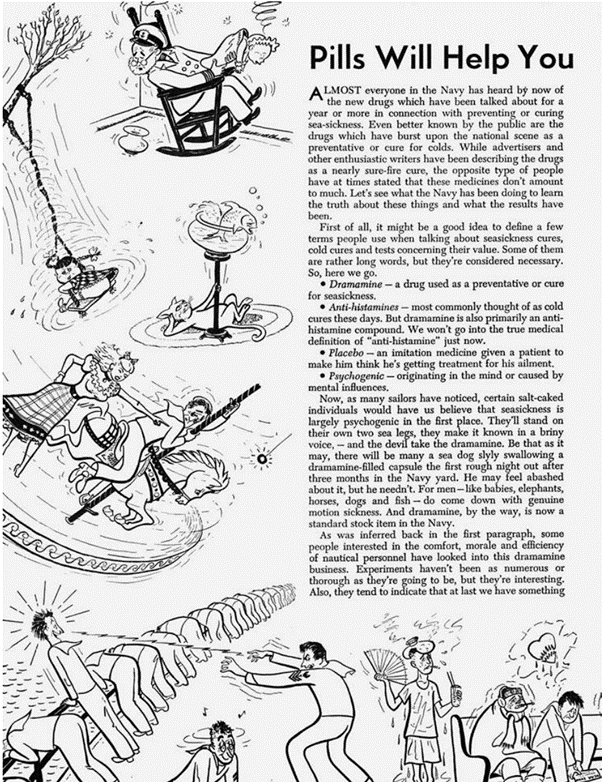 There is potential for more engagement with fictional supersoldiers and their heavy presence in current media and literature. Bickford explains how the US military not only crowdsources ideas through science fiction competitions but also, through the language and optics of superheroes, provides a ‘vocabulary to talk about war and killing as clean and devoid of death and trauma’ (249). Fictional supersoldiers such as Captain America serve as entertainment but also propaganda in creating an ideal soldier and hero. While Chemical Heroes makes these points, an opportunity to examine any direct correlations between the developments and inspirations of superheroes and the proposed supersoldier, was missed, but Bickford does set the groundwork for others to do so.

The book could also engage more with America’s ongoing war on terrorism and how it is presently connected to the supersoldier experiments. Rising Islamophobia and negative presentation of Muslims are not explored as factors pushing the desire for soldiers who are beyond human. There is also only a little engagement with drones and other autonomous weapons systems to which supersoldiers’ are feared to be aspiring. In Bickford’s discussion of ontopower, he acknowledges how pre-empting advancements in biology for the annihilation of the enemy brings about a tumultuous future where war is only furthered rather than quelled, as enhancements protect from, but also compel, violence.

This account is both highly technical and easily understandable. Bickford makes reading on this topic enjoyable and informative, neatly tying together the early iterations of the supersoldier from fascist and Soviet versions, to early American projects like Idiophylaxis that remain the roots from which present US projects have grown. Bickford relays a multitude of information in a seamless, if slightly repetitive, way. He navigates through these discussions in an engaging manner and this book is a must-read to enlighten oneself of the current approaches and history of supersoldier making. 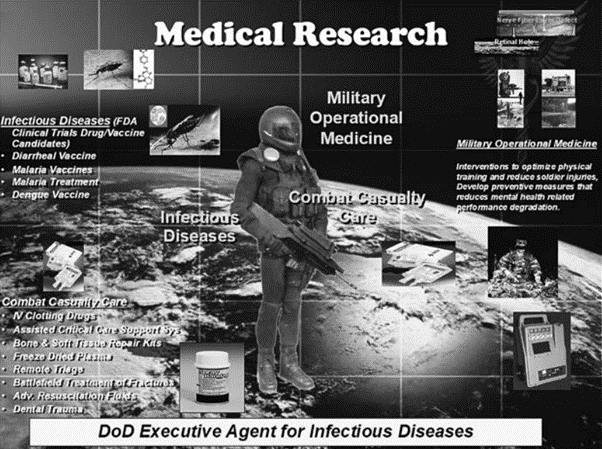 [ii] Scharre, Paul. 2018. An Army of None: Autonomous Weapons and the Future of War. New York: Norton.

Heena Hussain is an MA Literature and American Studies graduate from the University of Manchester, UK. She is planning to complete a PhD, focusing on Hollywood Superhero films produced post 9/11, examining the development and changing portrayals of soldiers and terrorists and the shifting construction of Muslims within these narratives.
View all posts by Heena Hussain →
Tagged  Military, Soldiers.
Bookmark the permalink.