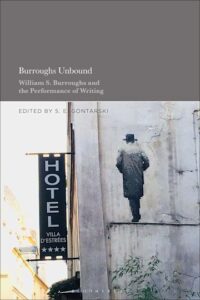 Burroughs Unbound is a collection of essays which explores recent interdisciplinary research on the twentieth-century US author William S. Burroughs. The main issues of the book concentrate on the performative aspects of Burroughs’ experiments on literature, particularly through what he, and collaborator Brion Gysin, called the ‘cut-up project’. The structure of the book somewhat mirrors the cut-up techniques used by the artists by being sliced and divided into three parts, with a series of appendices. The first part deals with ‘Theory’, where postmodernist and poststructuralist notions of control are captured via Derrida, Deleuze and Foucault. The second part, entitled ‘Texts’ is a textual analysis of Burroughs’ writing, from Naked Lunch (1959) to the cut-up texts and beyond. The third part explores Burroughsian ‘Performance’, in which, as the editor, Stanley Gontarski argues in his ‘Atrophied Introduction’, ‘Burroughs was as much a media and performance artist as he was a traditional literary figure’.[1]

Burroughs’ experimentation on the word catapults him out of the popular and the literary and into the unbounded. Although, as Gontarski explains, the book ‘is designed to punctuate, to underscore, to reemphasize William S. Burroughs’ (WSB) significance as a creative force, as a writer in his own right, yes, but as a cultural theorist as well’, some scholars, particularly Oliver Harris, have argued that Burroughs is not a ‘man of ideas’, or a theorist in any form.[2] Having said this, all the contributors aim to ‘unbind’ the Burroughsian. The book’s title stimulates many questions, such as, ‘How can scholars “unbind” Burroughs?’ And ‘How are Burroughs’ texts unbound?’. It can also stimulate the reader’s questioning of Burroughs scholars themselves; if he is a ‘theorist’, is he actually ‘unbound’ from the literary and critical tradition?[3]

These questions form much of the recent Burroughs criticism which explores the archives held in the New York Public Library. Scholars such as Jed Birmingham are using this material, with an emphasis on genetic criticism (Gontarski) and the materiality of the word (Harris), to get to grips with the genesis of Burroughs’ cut-up period. This type of criticism is showcased in Part Two of the collection, which inspires a fresh look at Burroughs from a ‘textual-biological’ perspective. Burroughs, it is argued in this part, bridges the arts and the sciences, or what C.P Snow called ‘the two cultures’ in 1959. For instance, in Oliver Harris’ paper, ‘Making Dead Fingers Talk’, the genesis of the manuscript, Dead Fingers Talk, which has material connections to Naked Lunch and was published in full in 2020, is scrupulously inspected and pieced together.

Part Two of Burroughs Unbound makes exciting use of literary and biological techniques and theories, such as considering the importance of the genetic structure of a text, via a historical account of the evolution of the texts. This originality is paralleled in Part Three. John Bennett, who co-edited the republication of Burroughs’ Revised Boy Scout Manual: An Electronic Revolution in 2018, also refers to the act of writing as a ‘performance’. The slicing, re-editing and rearranging of texts, he argues, is an attempt ‘to create a kind of universal text’[4] or one which employs ‘weapons that change [or expand] consciousness’.[5] This engagement with the expansive further unbinds Burroughs and could neatly lead to more research on Shamanic consciousness in Burroughs.

However, some of the text’s limitations are found in Part One where theoretical examples are regurgitated: there is already a lot of research on Deleuzean perspectives of Burroughs. For instance, Allen Hibbard argues, through the Derridean principle of ‘undecidability’, that Burroughs’ texts are unstable. This is mainly due to, as Hibbard suggests, Burroughs’ ‘practices of writing’, in which the ‘writer-arranger […] reread, edited, revised, and reshuffled his works’.[6] But Hibbard then challenges the assemblage of the ‘Restored Text’ which ‘raises as many questions as it answers’.[7] The paper, therefore, adds to a constellation of questions which Burroughs’ texts always conjure up. Perhaps this is the point of the Burroughsian composition, it is always ‘post’ rather than being placed into categories such as ‘post-structuralist’ or ‘Posthuman’.[8]

In Gontarski’s words, the purpose of Burroughs Unbound is to ‘loosen of the constrictions we use to describe, evaluate, and categorize Burroughs’ art’.[9] This challenging of literary, cultural and even scientific structures, follows on from the molecular analysis of the Burroughsian text, to which the recently published poetry trilogy (Minutes to Go, The Exterminator and BATTLE INSTRUCTIONS), and its analysis, has contributed. In a world of surveillance and censorship, the critics in this collection delve into Burroughs’ work to consider his multidimensionality– from theorist to performer. They closely read his difficult texts to highlight Burroughs’ intricate piecing together of various sources, so that the digital and analogue technologies which produce them are given due importance. In conclusion, the text contains an excellent mixture of perspectives and creative responses to Burroughs, which will encourage further research on this enigmatic writer.

[6] Allen Hibbard ‘Fluidity and Fixity in William S. Burroughs’ Writing: The Text Will Not Hold’ p. 106.

Lizzy is a third year PhD student, studying William S. Burroughs at Keele University. Her research considers Burroughs' 'cut-up project' as an example of poetic and scientific experimentation. She is also interested in how science fiction challenges the Canon, and why it is important to do so.
View all posts by Lizzy Trafford →
Tagged  American Literature, Book Review, Burroughs.
Bookmark the permalink.