Book Review: Borders of Equality: The NAACP and the Baltimore Civil Rights Struggle, 1914-1970 by Lee Sartain 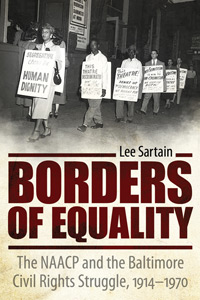 Female organization and leadership transformed the NAACP into ‘the vehicle that drove social and political change in Baltimore’ from the early days of the Civil Rights Movement (p. 172). Lee Sartain focuses on Baltimore due to its historical significance as a border city and its proximity to Washington D.C. While racism and segregation existed here as they did elsewhere in the early twentieth century, Baltimore espoused a relatively large black middle class and offered some degree of black voice and representation. Sartain is particularly interested in the local NAACP chapter, which was built upon family ties, church connections, and gendered concepts of leadership, most notably that of Lillie M. Jackson. Baltimore was also in many ways a testing ground for actions and protest that became synonymous with the Civil Rights Movement after 1954. Therefore, Sartain considers its NAACP chapter a ‘useful comparative gauge for other branches in America’ (p.10).

Sartain opts for a thematic approach over a strict chronological account, which is a 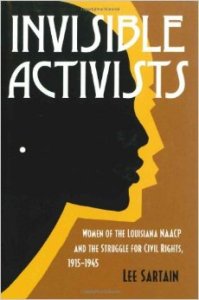 strength rather than a weakness, since it allows him to discuss his themes (class, gender, leadership and youth activism) more explicitly. The author primarily draws on the NAACP papers, oral histories, and the papers of other civil rights organizations. He finds that in the Baltimore branch, women were not just working behind the scenes as ‘invisible activists,’ but could become active leaders. In fact, Sartain argues, ‘gender is key to understanding the [NAACP] branch dynamics and the shape of their civil rights pursuits in Baltimore’ (p. 46). Female activism, commitment, family relations and networking skills were invaluable to the Baltimore NAACP, and women ‘dominated many components of the branch’ after 1935 (p. 53). 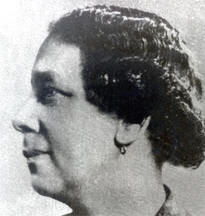 The book’s showpiece is undoubtedly the case study of Lillie M. Jackson, whom Sartain considers exceptional in her role as the chapter’s president between 1935 and 1970. Jackson’s real contributions and leadership are often overlooked or marginalized to the high watermark of the Civil Rights Movement. Yet in many ways Jackson defined the Baltimore branch with her leadership style as a demanding, dynamic, uncompromising but highly effective micromanager, invoking localism, family connections, and church organization, which were also significant in other NAACP branches.

But there is also a class dimension here, as most of the Baltimore branch activists were distinctly middle-class. Jackson, a business and property owner, was the epitome of the American progressive reformer, with an unwavering belief in education and property as the defining elements of citizenship. During the 1920s and 30s, the NAACP adhered to the DuBoisian philosophy that education, civic rights, and legal equality would eventually facilitate economic equality. The Baltimore chapter was an early antecedent of the organization’s national politics, and this middle-class calibration ensured its survival and avoided de-legitimization and radicalization. Baltimore thus ‘exemplified the vast complexity of the civil rights struggle from urban poverty to desegregation,’ before many of these issues gained national notoriety in the 1950s and 60s (p. 105). Sartain argues that Jackson became an official leader because of her organizing experience and her family and financial situation, but also because the NAACP was open to women activists, and the failures of early male leadership had enabled female advances. Issues of class and gender were thus intertwined in the Baltimore branch, where ‘women could find a leadership role while pursuing what appeared as traditional gender view of the world’ (p. 71).

Youth activism was another central theme for the Baltimore NAACP. The dominant Jackson family ties within the organization facilitated youth activity and made the branch more cohesive, despite some tension within, with other civil rights groups, or the national office, which often saw its local chapters as fund generators. Yet Baltimore served as test case to implement the Brown decision to desegregate schools, and the local knowledge gained from previous activism would inform the national movement. The Baltimore NAACP chapter, Sartain concludes, thus no longer merely operated from ‘a border state on the periphery of federal power, but as a branch in the midst of changing national policy’ (p. 162). In 1986 the association’s national office was moved from New York to Baltimore, and the periphery essentially became the center.

Sartain engages very aptly with the growing literature in his field and beyond, perhaps with the exception of Thomas J. Sugrue’s influential Sweet Land of Liberty, a reference to which could have potentially aided Sartain in historiographically situating his excellent study more firmly in the broader national context of the Civil Rights Movement. Moreover, it may have further undergirded Baltimore’s exceptional status as a socio-political borderland, especially since Sugrue largely neglects Baltimore, and does not mention Lillie Jackson at all. Nonetheless, Sartain subtly and skillfully employs borderland methodology and language, thus taking an unlikely subject and situating it within a larger interdisciplinary discourse, and potentially making it more accessible to readers previously less familiar with civil rights scholarship.

Book Review: Embodying Masculinities: Towards a History of the Male Body in U.S. Culture and Literat...
Book Review: Charlie Brown's America: The Popular Politics of Peanuts by Blake Scott Ball
More on War by Martin Van Creveld
BAAS 2022 Panel Review: 'Ecologies of Race and Gender in Nineteenth-Century American Culture'
What We Learned: Organiser's report on the 1st Americas Postgraduate Conference at the UCL Institute...
Book Review: Literary Fiction: The Ways We Read Narrative Literature by Geir Farner
Book Review: An American Genocide by Benjamin Madley
Book Review: West of the American Revolution: An Uncommon History of 1776 by Claudio Saunt