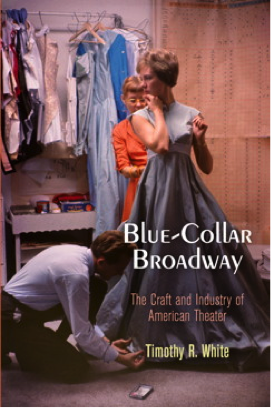 In the introduction to Blue-Collar Broadway, urban historian Timothy R. White contends that his study ‘pushes against the design-oriented boundaries of theatre history’ (8) by focusing on the craftspeople, supply shops, and theatre-related businesses that helped to make Broadway shows during the twentieth century. White uses geographical and demographical data to link his analysis of ‘the Broadway craft economy’ (3) to the industrialization and de-industrialization of Times Square—the district within which the majority of skilled theatrical workers were congregated between the 1900s and 1970s. Over seven chapters, White reveals the human and physical impact that unionization, technological innovation, competition from regional theatres, tourism, haphazard city planning, and globalization exerted on America’s ‘“factory for making plays’’’ (36).

Blue-Collar Broadway is structured chronologically. The first three chapters examine the conditions of American theatre craft before the establishment of the Broadway business model (c. 1870 to 1900), the industrialization of Broadway between 1900 and 1930, and the district’s accommodation of radio, television, and film production during the 1930s and 1940s. Although White does not deviate from the established canon of American theatre history in these chapters, he enlivens each one with archival research gleaned from telephone directories, business listings, building occupancy records, fire insurance maps, and union meeting minutes. This material contributes profoundly to White’s portrait of a geographically and interpersonally fluid industrial district.

These chapters provide the historical and thematic context for three innovative case studies. In chapter four, White focuses on the construction of the 1943 Broadway hit play Oklahoma! by shops and suppliers within a ten block radius of Times Square. White uses Jane Jacobs’ concept of cities as research laboratories that develop new ideas and products to frame his analysis of Broadway show construction in the 1940s. Jacob’s theory enables White to reject the existing understanding of theatre investment in terms of consumption (ticket sales and tourism), and examine instead the impact of Broadway’s business cycles on investors and contractors in a less sensationalized way. Revealing the profit- and liability-minded investment habits of Broadway investors, as well as the fiscally responsible fee-schedules contractors agreed with a show’s producers that covered wages and raw materials upfront, White offers an original vision of Broadway as a pragmatic and recuperative business environment. 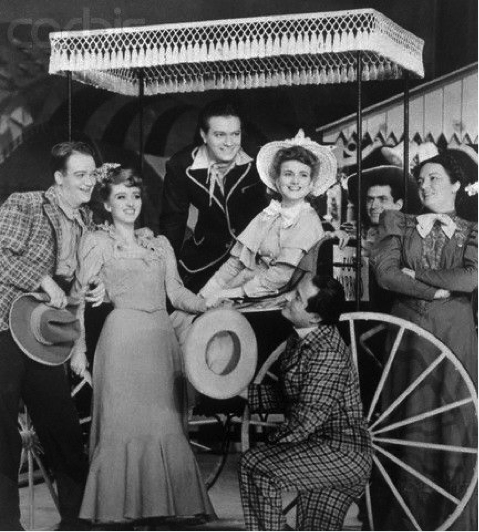 In the case study in chapter six, White challenges the historical focus on shifting cultural mores and political motivations for redevelopment as catalysts for change in Times Square in the 1970s. White observes that craft jobs migrated away from New York City ‘in their droves’ (186) in the 1970s and he uses ‘block-matching’ to link this deindustrialization to the 100 block of West 45th Street’s slide into crime and adult entertainment. Using maps generated from building information in fire insurance maps dated 1966 and 1973, White visualizes a direct correlation between the closures of theatre-related businesses and the proliferation of adult or criminal activities within the structures they vacated. He also links the dispersion of theatre-related businesses and craftspeople to the failure of Broadway’s power players—producers and booking agents—to make visible the labour of stagecraft to audiences. No matter how enthusiastic city planners and developers were about theatre in the mid-1970s, White argues, they were oblivious to the fact that cost-effective show building on Broadway required available space for construction and rehearsal, not just half-price ticketing initiatives or new theatres in corporation-owned towers.

Blue-Collar Broadway has few weaknesses. One might be that White’s engagement with the history of American theatrical aesthetics is unchallenging. White links the rise of stage realism with the development of theatrical monopolies in New York, the influence of producers like David Belasco, new technology, and audience demand. This is the conventional explanation for the development of stage realism and the institutional changes affecting American theatre during the late 1800s. These were influential phenomena, but there is, as Ben Fine observes, no simple relation between production and the rest of the economy. White’s analysis of these and other issues could perhaps have profited from a more nuanced appreciation of the different kinds of social relations involved in artistic production and practice.

Blue-Collar Broadway is a work of high-quality scholarship. White locates, in the rise and fall of the Times Square theatre district between the early 1900s and 1980s, a new and intimate way to frame the broader movement of urban deindustrialization in America during the twentieth century. In so doing, he has produced a fascinating interdisciplinary book that will appeal not only to students and academics interested in theatre history and urban studies, but also to theatre-lovers of all stripes.

Celebrating Neutrality? What We Can Expect from America's Ongoing Centennial Commemorations of the “...
Conference Review: 'Not Your Average Superhero'
My Research across Borders: Lonneke Geerlings
Book Review: Irish Nationalists in America by David Brundage
Mirroring the Medium: Depictions of Female Domesticity in ‘WandaVision’
Book Review: An American Genocide by Benjamin Madley
Book Review: The Absence of America: The London Stage, 1576-1642 by Gavin Hollis
Conference Review: ‘Women’s Transatlantic Prison Activism since 1960,’ the Rothermere American Insti...