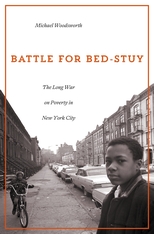 In recent years Brooklyn has become trendy. Young professionals have rushed to buy homes in neighbourhoods like Park Slope and Red Hook, while budding artists, writers, and musicians have flocked to Williamsburg and Green Point. Even those not looking to live in Brooklyn have been drawn to the hip new bars, restaurants, and shops that populate the borough’s newly fashionable neighbourhoods. While the intertwined forces of displacement and gentrification have reshaped only select areas of Brooklyn, there can be no question that the national and international reputation of New York City’s most populous borough has been thoroughly transformed.

Contemporary interest in Brooklyn has not simply been confined to estate agents, restaurateurs, and the Beckhams. Since the turn of the millennium, historians such as Wendell Pritchett, Suleiman Osman, and Brian Purnell have produced important books that focus on twentieth-century Brooklyn. Building on this work, Michael Woodsworth’s Battle for Bed-Stuy examines the ‘Long War on Poverty’ in the Bedford Stuyvesant neighbourhood of Brooklyn. However, Battle for Bed-Stuy is not designed simply as a localised study of the implementation and consequences of federally funded antipoverty initiatives in the ‘largest ghetto in America’ (12). Indeed, although this monograph is focused on one particular place, Woodsworth is seeking to insert himself into wider conversations about the origins of the War on Poverty and its economic, political, and social impact.

Most accounts of the War on Poverty begin in the White House during the Kennedy or Johnson administrations and end in the late 1960s on the streets of Saigon, Detroit, or Chicago. However, in Woodsworth’s opinion, the War on Poverty was ‘something more complex than a set of federal programs handed down from above’ (9). Recasting it ‘as a social movement and as a set of policy innovations’, Woodsworth highlights the role that middle-class community activists—individuals that he dubs the ‘foot soldiers’ of the War on Poverty—played in shaping anti-poverty ideas and institutions. As such, he depicts the Long War on Poverty as a ‘social movement that spanned several decades’ and argues that New York City’s ‘municipal elites and neighborhood level actors spawned ideas and institutions that were later appropriated by federal policy makers’ (9-10).

In its first three chapters, Battle for Bed-Stuy examines the ‘transition period bridging the New Deal and the Great Society’ (9) and traces New York City’s efforts in the 1940s and 1950s to address juvenile delinquency and youth crime. Detailing the experimental programmes that Brooklyn’s community organisers and social workers developed to tackle these issues, Woodsworth illustrates the attempts of New York City Mayor, Robert Wagner, to mobilise ‘neighborhood activists and ta[p] into grassroots energies’. In so doing he provides a compelling portrait of bottom-up policy innovation and convincingly illustrates how Brooklyn’s community activists were able to ‘tap the resources of the expanding liberal state’ (9).

The middle chapters of the book are focused on the 1960s. Concentrating on civic groups, block associations and community activists, Woodsworth illustrates how activists embraced the federal War on Poverty, but also organised and agitated to ensure that more attention was given to creating jobs and building affordable housing. In these chapters, Woodsworth’s community activists appear surprisingly powerful. Indeed, in perhaps the book’s most compelling chapter, Woodsworth demonstrates how Bed-Stuy’s community activists used public and private resources to experiment and develop new antipoverty initiatives, and in the process laid the foundations for Robert Kennedy’s flagship anti-poverty initiative, the Bedford Stuyvesant Restoration Corporation.

In its final two chapters, Battle for Bed-Stuy examines the period in which the federal War on Poverty was being dismantled and follows the evolution of the Bedford-Stuyvesant Restoration Corporation after Robert Kennedy’s death. Some of the narrative in these chapters follows a familiar pattern. A newly elected mayor preoccupied with economic growth promises to tackle “poverty pimps” and to save the city’s taxpayers money by cutting back on social programmes; a public-private partnership comes under fire for serving the needs of the middle-class. However, not all of the narrative in these chapters fits neatly into a story of racial backlash and rising neoliberalism. For example, the story also includes the role that the Ford Foundation played in sustaining Community Development Corporations during the 1970s and 1980s, the election of the activist Shirley Chisholm to the U.S. Congress, and the establishment of Medgar Evers College.

While Battle for Bed-Stuy makes an important contribution to the field of post-war U.S. history, some areas are stronger than others. Although Woodsworth promises in his introduction to explore ‘the War on Poverty’s complex local realities—the limitations and possibilities, the deep roots and the lasting legacy’, his focus is largely limited to the roots of the War on Poverty (12). As such, the early chapters are well-developed, but the later chapters of the book–which address the legacy of the War on Poverty–read as an extended epilogue (12). Given that one of Woodsworth’s central contentions is that local activists played an important role in influencing the War on Poverty, it would also have been useful if there were a more detailed discussion of the links between the national and the local story.

Much like Brooklyn’s vaunted 21st century renaissance, it is too early to judge Battle for Bed-Stuy’s long-term significance. But, whether or not Battle for Bed-Stuy attracts the attention that it deserves, it offers a potent challenge to the classic top-down narrative of the War on Poverty. After reading this book, it seems impossible to accept the traditionally narrow focused temporal and spatial narrative of the War on Poverty as complete or wholly satisfactory. Indeed, by the time the narrative reaches the early 1960s, one is left with the impression that the War on Poverty was a policy agenda and a set of sensibilities closely tied to the post-war boom, rather than a specific set of policies that emerged fully formed from the minds of Lyndon Johnson and his closest aides. One suspects, therefore, that anyone seeking to write a new synthesis of the Great Society will need to take notice of this book and its conclusions, to pay attention to the local and national aspects of the Long War on Poverty, and to think carefully about when and where to begin and end their story.

Daniel Rowe is a a third year P.hD. candidate at the University of Oxford. His doctoral dissertation examines reactions and responses of states and localities to the economic turbulence of the 1970s and 1980s.
View all posts by Daniel Rowe →
Tagged  American Working Class, C20, Great Society, New Deal, post-war, Urban history, War on Poverty.
Bookmark the permalink.