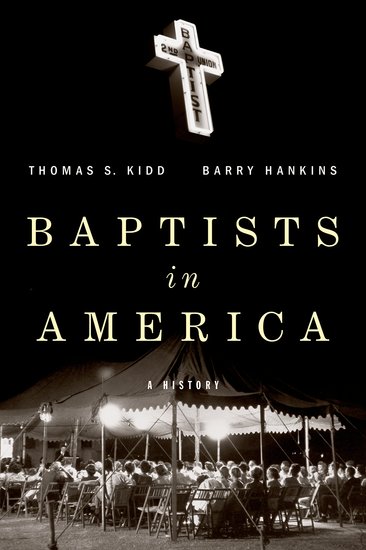 What do Jimmy Carter, former United States’ Supreme Court Justice Hugo Black, the late Jerry Falwell, and progressive thinker Walter Rauschenbush have in common? The answer is that they were all American Baptists. In Baptists in America: A History, Thomas Kidd and Barry Hankins try to make sense of the diverging views and characters that make up the story of Baptists in the United States.

Although Hankins and Kidd teach in a Baptist university (Baylor University), and at least adhere to normative Baptist distinctives, they have produced a readable and sweeping account of a segment of Protestants that have significantly influenced politics in the United States. According to the authors, what defines Baptists in America is not theology or even a specific canon of texts. Instead, religious liberty is the key factor that Baptists whether liberal or conservative have addressed and corralled around throughout their history in the United States (248-249).

Familiar names highlight the chapters of Baptists in America, such as colonial rabble-rouser Roger Williams as well as twenty-first century evangelist Charles Stanley. But what is most intriguing and not apparent to the non-specialist reader is that the writers have taken up a Calvinist view of Baptist history. This will not appear to be significant to the majority of readers but among the leaders in Southern Baptist institutions, the Calvinist-Armenian debate is the defining issue of recent times. In fact, it has become something of a culture war among older Baptists who dismissed the reformer John Calvin and a new generation of reformed Baptist pastors looking to instill the possibility of a closed communion, again. Even as the authors see a clear tacit Calvinism Baptist history, it seems to be minor and does not skew their findings.

While the entirety of Baptists in America is valuable to lay readers and experts, the writers are most engaging when dealing with Baptists in the twentieth century in the final four chapters. This seems lopsided realizing that the first nine chapters move quickly from the first colonial Baptists to their nineteenth century progressive and fundamentalist heirs. In the writers’ defense, it is the Baptists in the twentieth century that has captured the imagination and ridicule of critics and observers alike.

Baptists have not only always been in the religious mainstream, according to the authors. In British North America, Baptists were often persecuted for not being mainstream enough. The reader will learn, for example, that many early Baptists were ambivalent about the American Revolution because its persecutors were often those leading the charge against the British (39-40, 44). However, white Baptists began eventually entering the religious mainstream, say the authors, following the Civil War “as they built a southern Zion, they identified closely American ideas of democracy and freedom” (167).

The First World War made American Baptists cultural insiders. In order to demonstrate this seminal change, the writers show the rise of First Baptist Dallas Pastor George W. Truett. Truett was influential in the early twentieth century in worldwide Baptist circles, preaching the final sermon at the 1911 meeting of the Baptist World Alliance. Whereas Baptists before the Great Awakening were often persecuted for what we merely consider minor theological differences—such as denial of infant baptism and the need for adult believer’s baptism—the push for empire produced a different kind of Baptist leader that was comfortable in the spotlight of democracy (7).

Truett’s words to the Baptist World Alliance showed this shift in Baptist thinking as former outsiders in the West. “The triumph of democracy, thank God, means the triumph of Baptists everywhere,” Truett said (178). Nearly a decade later, Truett preached what the writers call “the most famous sermon in Southern Baptist history” (179). During the 1920 Southern Baptist Convention meeting in Washington, D.C. Truett spoke from the steps of the Capitol. In attendance were members of the Supreme Court, congressmen, and members of Woodrow Wilson’s cabinet. “The central thrust of the sermon…was a triumphal one: Baptists and Baptists Alone, he (Truett) claimed, championed the principles of religious liberty” (179).

The remainder of the story of Baptists in the twentieth century is one of further triumph, comfortability in the American polity, and division. If the reader is expecting juicy tidbits of insider information regarding the rise and fall of Baptist leaders and churches, she will not find them in this book. Still, familiar Baptist names such as Jerry Falwell and his rise as a political leader demonstrate how broad the appeal of Baptists were by the 1970s and 1980s. The authors also address the role of lay Southern Baptists in The Civil Rights movement arguing that most white Southern Baptists remained on the sidelines because of the idea of “soul competency” (225). In other words, “White Southern Baptists spanned the spectrum of racial views…” (225).

It is obvious from Baptists in America that further treatment is needed by professional historians to get to the essence of the many controversies and theological nuances that define Baptists. However, Kidd and Hankins’ work provides an excellent starting place for future historians looking for an excellent overview of the odd path of Baptists in the United States.

Book Review: Forging a Laboring Race: The African American Worker in the Progressive Imagination by ...
What We Learned: Organiser's report on the 1st Americas Postgraduate Conference at the UCL Institute...
Book Review: An Intimate Economy by Alexandra J. Finley
Review: Transatlantic Women in the Trenches, Transatlantic Literary Women Series
Review: 'Border Crossings: Translation, Migration, and Gender in the Americas, the Transatlantic, an...
Review: Joint BrANCH and HOTCUS Annual Conference
Conference Review (part two) of BAAS 2015, with Saturday Plenary
Book Review: West of the American Revolution: An Uncommon History of 1776 by Claudio Saunt