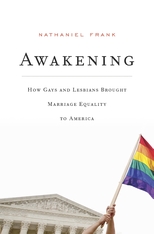 Nathaniel Frank’s Awakening: How Gays and Lesbians Brought Marriage Equality to America is a well-researched, sophisticated chronological legal history of the fight for marriage equality. It examines the intricacies of legal debates, legislative changes, and pro-gay legal organisations such as Lambda Legal Defense and Education Fund, Gay Rights Litigators’ Roundtable, and Human Rights Campaign (HRC). Beginning in the early 1960s when marriage equality was considered a fringe campaign, even within the homophile movement, Frank traces how marriage became a key debate of the culture wars in the late twentieth, and early twenty-first, centuries. This book explores the conflicts within the gay rights movement, conservative resistance, and changing public attitudes towards marriage equality in the United States.

Frank untangles the complicated debates within the gay rights movement, detailing how activists both championed and criticised the idea that gay rights organisations should push for equal marriage. Although the book focuses on the activists and organisations that campaigned for marriage equality, it also acknowledges and discusses the critiques of marriage, particularly by lesbian feminists who resisted marriage which they viewed as a staid heterosexist union. Many gay activists, who insisted that there were more important campaigns than marriage equality, emphasised the need to educate society and gain support for alternative family models.

The chapters themselves –- which run chronologically rather than thematically — focus on the ebbs and flows of the marriage equality movement. The first three chapters explore the beginnings of support for equal marriage within the gay liberation movement. Chapters four to fifteen examine various legal battles over same-sex marriage and subsequent backlash and opposition to the equal marriage campaign. The final chapter analyses the success and implementation of marriage equality in 2015. Frank examines the successes and subsequent backlash of marriage equality legislation in Hawaii in 1993, Vermont in 1999, Massachusetts in 2004, California in 2005, and New York in 2009. Frank argues that DOMA, the Defense of Marriage Act changed the activism surrounding equal marriage. Despite determination to agitate for marriage equality, federal setbacks led to an incremental strategy where select cases were lodged state by state, as activists hoped to increase grassroots support and positive state rulings before challenging federal laws.

The chapters not only analyse the equal marriage and civil partnership legislation, but also consider how other court cases such as Bowers v. Hardwick (1986) and Lawrence v. Texas (2003), which challenged sodomy laws, impacted the equal marriage movement. He argues that these gay rights cases had a fundamental impact on the marriage equality campaign, influencing organisations and activists to change their strategies, as legal rulings revealed the negative federal, state and societal attitude to gay rights. Throughout the book, Frank discusses how presidential silence, disapproval and backtracking emphasised to marriage equality organisations the necessity of grassroots education and legal challenges, as they could not depend on the Executive Office of the President of the United States to support their claims.

Alongside the campaign for marriage equality by organisations, lawyers and activists, Frank examines the large-scale conservative resistance to legal change. He argues that detractors in the 1990s, 2000s and 2010s depended on the same fearmongering tactics as Anita Bryant’s ‘Save our Children’ and The Briggs Initiative, which sought to overturn anti-discrimination ordinances in the 1970s. Conservative organisations opposed to equal marriage, such as the Family Research Council (FRC), ProtectMarriage.com and the Institute for American Values (IAV), argued that same-sex marriage would destabilise the traditional family unit and negatively affect children.

However, as the marriage equality movement progressed Frank reveals how ordinary gay Americans and activists outside the official campaign became impatient. Ted Olsen, Dustin Lance Black and Andrew Sullivan criticised the organisations campaigning for marriage equality, claiming that their incremental approach was out of touch with the desires of ordinary gay men and lesbians. Frank rightly notes that these new crusaders failed to acknowledge the incremental successes of earlier gay rights organisations that had struggled for decades laying the groundwork that allowed men like Olsen, Black and Sullivan to loudly demand marriage equality.

Nathaniel Frank extends and elaborates on some of the arguments initially discussed in George Chauncey’s Why Marriage: The History Shaping Today’s Debate Over Gay Equality (2005) and Mary Bernstein and Verta Taylor’s edited collection, The Marrying Kind? Debating Same-Sex Marriage within the Lesbian and Gay Movement (2013). Chauncey examines historical influences on the same-sex marriage debate, such as widespread prejudice against gay men and lesbians, gay and lesbian resistance, and the successes of other civil rights movements throughout the twentieth century including those advocating for equal rights for women and blacks. Frank, on the other hand, focuses on activists, organisations, and detractors involved in the growing equal marriage campaign. Articles within The Marrying Kind? address the conflict surrounding marriage equality within the gay and lesbian movement; Frank also analyses these contentious debates but concentrates on the activists campaigning for marriage equality.

Although focused on the marriage equality campaigns in the United States, the book could have included more of a discussion on the international changes in marriage equality laws and how these transformations impacted the domestic movement. Further discussion of the ongoing debates within gay communities on civil partnership and marriage would also have been useful, particularly in the years since the United States Supreme Court ruled in Obergefell v. Hodges that state-level bans on same-sex marriage were unconstitutional. Such discussions would have shown that even on the cusp of full marriage equality in 2015, many gay Americans continued – and continue – to feel ambivalent about the nature of the union itself.

Rachel Wallace is a Visiting Instructor in History at Loyola University New Orleans where she teaches on LGBTQ history, the 1960s, public history, women's studies and feminist theory. She is also a Research Fellow at the Southern Food and Beverage Museum and teaches courses in Women's Studies at Xavier University New Orleans. She completed her PhD at Queen's University Belfast in November 2018. Her writing can be found in The Journal of Popular Culture, Southern Cultures and The Public Historian.
View all posts by Rachel Wallace →
Tagged  C21, Civil Rights, Gender and Sexuality, LGBT.
Bookmark the permalink.