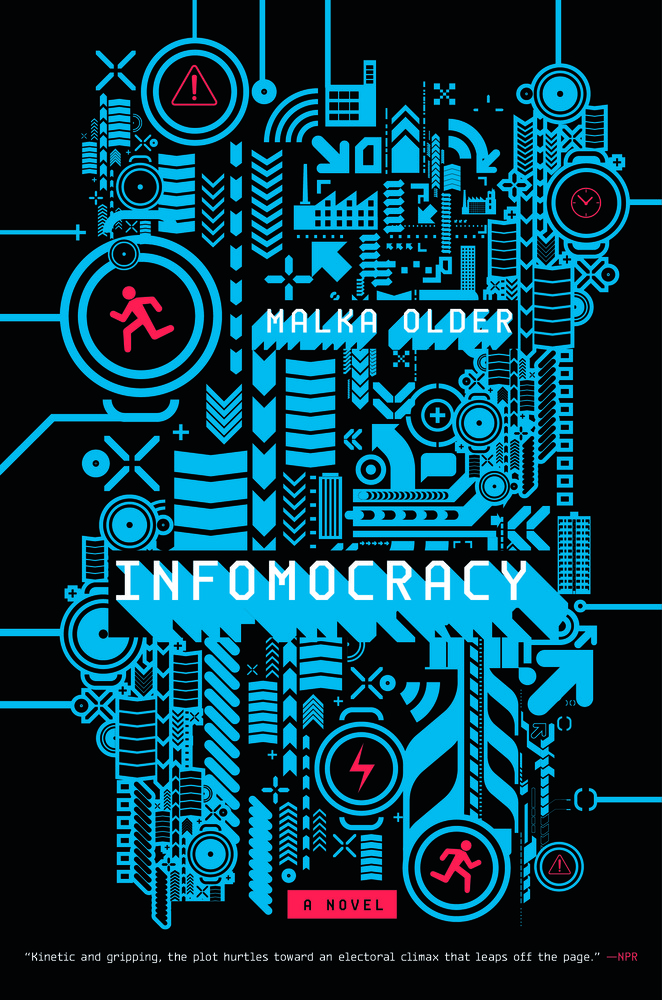 A pivotal election has the international public on edge. As rivaling political forces vie for political power, digital communication media becomes the weapon of choice in a fierce ideological battle. Like an autoimmune disorder, the free flow of information meant to protect democracy threatens to destroy it from the inside, with conspiracies real and imagined putting the social fabric to a dramatic stress test. If this storyline sounds familiar, it is because Malka Older’s take on the future has turned out to be stunningly prescient. One of the new voices in cyberpunk fiction, she has taken on a genre that has been struggling with its raison d’être. Forged in the zeitgeist of the 1980s, many of its narrative and visual tropes have come to feel stale, and its rebellious spirit often seems to have faded to trivial trendiness. Even as its central concern, the impact of technology on human society, seems more relevant than ever, the repetitive parade of techno-orientalist neon dystopias has many wondering whether cyberpunk is not so much alive as undead.

And so Older’s Centenal Cycle Trilogy ­– comprised of the novels Infomocracy (2016), Null States (2017), and State Tectonics (2018) ­– comes as a burst of fresh energy. Leaving behind the generic aesthetic of bubblegum-coloured bleakness, the technothriller series creates its own cyberpunk flavor by combining finely textured worldbuilding with a stylistic unaffectedness that marks a notable departure from the flashiness which has famously given cyberpunk the reputation of putting ‘style over substance.’ Set in the mid-twenty-first century, it envisions a political landscape that has been radically transformed by the ubiquity of communication technology as most traditional nation states have been replaced by worldwide microdemocracy, a system based on independent administrative units of respectively 100,000 constituents. Every ten years, these so-called centenals elect their governments from a vast number of globally competing parties, so that states are no longer defined by geographical, cultural, or ethnic aspects but can extend to any given centenal in the world. As a key microdemocratic institution, the transparency agency Information works to provide the public with impartially vetted facts. But just as the global community is in the midst of another election, a cyberattack targets different individuals with different information and undermines the very foundation for democratic dialogue and decision-making. 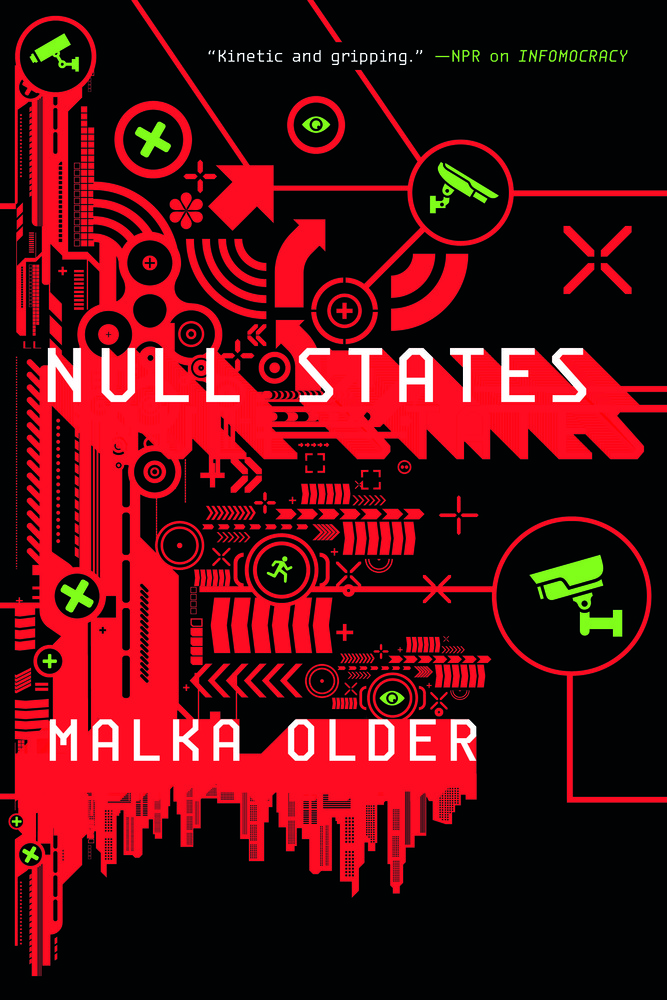 It is worth stressing that Older developed the idea for the series well before the emergence of Trumpism and the eruption of the public controversy over fake news and alternative facts. This circumstance may serve to illustrate the unique challenges faced by contemporary science fiction writers whose imaginations are in a constant race against ever-accelerating collective change. With the future so close on the heels of the present, reflecting on our own experience through a futuristic lens comes with the risk of being promptly overtaken by current events. But here the Centenal Cycle stands out in that, rather than relying on conspicuous contrasts between the actual and the imagined, it compels through its future’s palpable proximity. This notably manifests in the depictions of technology; while the reader is invited into a fantastic high-tech world where devices are operated with the blink of an eye, translation earpieces enable people to spontaneously communicate with each other without language barriers, and electronic information tags are projected next to nearly everything and everybody, all this seems not so far removed from existing communication media and virtual assistant AI. In other words, the futuristic filter applied to draw attention to the political implications of a digitalised society is so slight that it seems to be getting ever more transparent. This is why the progressing convergence of actuality with fiction enhances rather than reduces the Centenal Cycle’s appeal. Especially after we have witnessed the culmination of social-media-fueled polarisation in the Stop the Steal movement and the violent insurrection at the U.S. Capitol, Older’s inquiry into the vulnerabilities of digital democracy seems even more topical than at the time of its publication.

Yet, for all her probing of the darker sides of technological advancement, Older’s writing is indicative of a temperamental shift from the genre-typical technophobic visions of impending dystopia to a more balanced weighing of positive versus problematic effects of our increasing reliance on technology. Instead of gloomy predictions of inescapable societal collapse, it affirms that the future is not yet cancelled, and that, depending on the way we choose to use it, technology may be our greatest challenge but also our most powerful ally in bringing about constructive social change. In investigating questions such as the feasibility of objectivity, the disparities generated by different degrees of access to information, or the conflicts between technoscientific and traditional mindsets, the Centenal Cycle tackles issues that are at the heart of present-day political debates.

Thus perched in between futurism and realism, the Centenal Cycle is a thought-provoking reimagination of democracy in the digital age, but also an entertaining political thriller filled with fast-paced action, captivating settings, and memorable characters. This is a landmark cyberpunk work that renews the genre’s imagery and themes for our own time, and in doing so recommits to its socio-critical origins.

I didn’t necessarily think of the features as totally positive or totally dangerous, but to be a little offhand about it. I think that separating government from physical location would be positive, reducing the unit size of democracy would probably be positive, and focusing on population rather than territory for legitimacy would be, maybe not positive exactly, but more accurate as a representation of the state of the world. Information as a concept is both potentially very positive and extremely dangerous.

Both! One of the big governance stories of this era is the tension between those two needs – aggregation and devolution – and the struggle and experimentation to figure out what works best in which slot. We really need global governance, in a sense that has not been achieved yet, for some things, and we need a lot of granular autonomy for others, and the trick is going to be figuring out which is which (and tracking it as it changes over time or in different places).

The concept, of course, comes from my own experiences with the disorder! I’m very conscious of my addiction to stories, and my tendency to construct new ones. Indeed, as you say, it’s a key skill for me in my job. I was also influenced by Frédéric Martel’s Mainstream, which details how stories cross the globe are replicated in different media. We live in an age that is fascinated with quantification, for various reasons, and I’m not entirely opposed to that – I have some background in economics, which I find useful, and from my experience in development and disaster response I am very much in favor of standards, measurement, and accountability – but we also need to recognize the limits of quantification, and the potential of stories. In terms of conspiracy theories, I think they represent roughly the same thing as the proliferation of extremely poor Hollywood movies, a subset or symptom of narrative disorder that comes from poor story choices and a lack of engagement with the real world. To offer a counter-example, narrative disorder could be used against conspiracy theories with the question ‘does this make sense narratively?’ Very often the conspiracy theories fail the Occam’s Razor of motivations test, and as stories they seem strange. But again, it depends what kind of stories you’ve fed yourself or been fed.

Here again, I question the premise to a certain extent. Certainly, the internet has been used in anti-democratic and oppressive ways. But at the same time, it continues to be used in pro-democratic ways, as well as by activists and revolutionaries. The problem is less the technology itself than the power structures into which it is embedded.

There are practical challenges, such as finding time to write and dealing with health insurance in the United States and so on, but it is also certainly a challenge to stay ahead of technological and social developments. Especially as I was writing my second and third books, there were times when I wrote something and then was overcome by events and realized that people would think the subtext was entirely different.

I’m always working on multiple projects! At the moment, I’ve got the writers’ room for the second season of Orphan Black: The Next Chapter on Serial Box. I’m also working on multiple novels, some YA, some adult. I have a short story scheduled for the new, bilingual magazine Constelacion in January, and I’m teaching at Arizona State University.

After studying North American literature, Russian literature, and musicology at the University of Hamburg and UC Berkeley, Olga Thierbach-McLean earned her doctorate in American Studies at UHH. Her main research interests are in contemporary U.S. politics and particularly the intersections between politics and literature, in American Transcendentalism, the intellectual history of liberalism, and dystopian fiction. Currently, her projects are focused on the cultural appropriation debate as an aspect of American political exceptionalism and on the reimagination of the cyberpunk genre as social criticism. Olga Thierbach-McLean is an adjunct lecturer at the University of Hamburg.
View all posts by Olga Thierbach-McLean →
Tagged  Book Review, Interviews.
Bookmark the permalink.