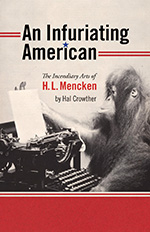 Placing any sort of faith in a book’s back-cover description of itself is a risky business.  However on this occasion it is refreshingly apt.  Hal Crowther’s study of the infamous Henry Louis Mencken is outlined as “a tribute—though by no means a loving one—to a giant from one of his bastard sons”. Crowther, an accomplished journalist, won the Baltimore Sun’s H. L. Mencken Writing Award in 1992.  The implication of, at least a little, metaphorical shared blood is evident in the journalistic prowess of both subject and author, notable throughout this short, sharp burst of a book.  Facing a canonical author with an intimidating wealth of existing scholarship can, at times, beg the question: what is really left to say?  Mencken certainly falls into this category, a fact acknowledged in the “Disarming Introduction to an Alarming American”.  Yet, in only seventy-seven pages, Crowther manages to offer a valuable and engaging contribution to the discussion of an extensively discussed man.

The book reads more like a collection of journalistic articles than an extended work of literary criticism, although this is not to diminish what is undoubtedly a thoroughly-researched and thought-provoking book.  At the end of the brief introduction Crowther instructs his readers to, “Pick up your hazmat suits and land-mine detectors at the gatehouse here, and follow me, if you’re so inclined” (13).  The conversational prose, generously peppered with metaphors, makes extensive use of journalistic tropes.  Thus the short text is compellingly readable.  For Mencken, a man who proposed “to euthanize PhDs and bury them in common graves” (50) it is likely this style would have appealed more than any overtly academic discussion of his work.  Not only “infuriating” but also ceaselessly infuriated, Mencken ruthlessly derided not only intellectuals, but almost every possible icon, attribute, and group present in American society.  It becomes apparent that the “hazmat suits and land-mine detectors” may well be necessary. 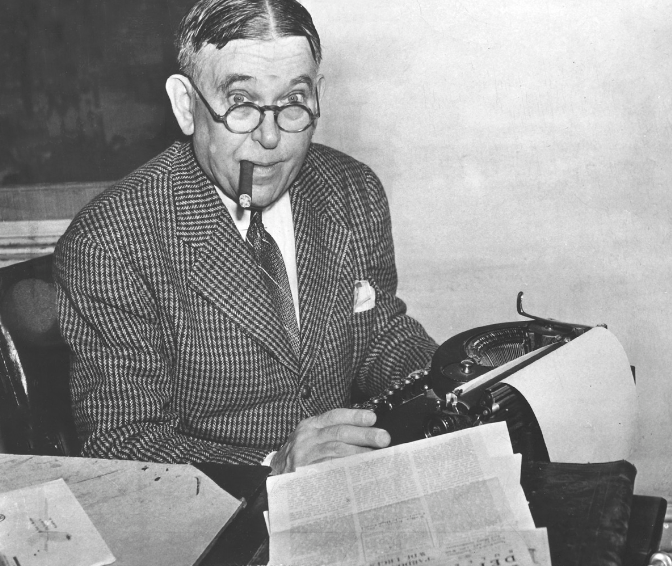 H. L. Mencken: Writer. Mencken, born Henry Louis Mencken in Baltimore in 1880, is known as the “Sage of Baltimore.” He worked as a writer for the Baltimore Sun from 1905 until 1948. (Robert F. Kniesche/Baltimore Sun) Image Source: http://darkroom.baltimoresun.com/2012/04/the-suns-175th-anniversary-personalities-through-the-years/bs-bs-wb-menken-e/

The scope of Mencken’s work is staggering, “10 million recorded words by his own reckoning” (1), making the accomplishment of this book all the more impressive.  Crowther arranges his work around thematic chapters, as opposed to an impossible analysis of the entire corpus, contextualising and interrogating the man, his work, and American culture.  In “Machine Dreams”, the first of four short chapters, Crowther situates the “devout technophobe” in relation to the only invention—aside from the Pullman car—Mencken claimed was ever of any use to him: the typewriter.  Highlighting the historical importance of the typewriter, Crowther positions it as “a clever piece of technology but essentially a democratic hand tool nearly anyone could learn to use” (17).  Entry into discussion of Mencken in this manner situates him in a time “when building a paragraph sounded like building a fence, and required nearly as much physical effort” (17).  Mencken, the typewriter, and the newspaper century are rightly positioned as inextricably linked; communicating at once the vigour, rebellion and aggression of all.   While the wealth and political clout of the newspaper age was wielded by tycoons such as William R. Hearst, “its ringing voice, its master of ceremonies—the King Kong of the Keyboard, the Napoleon of the Newsroom—was the singular Henry Louis Mencken” (19).

Mencken’s fury, wit and controversy are quickly brought into focus in the chapters that follow.  “Angry with His Own Time” questions the origins of Mencken’s seemingly endless rage.  Crowther tentatively proposes, “An educated guess is that the thing he loathed most was optimism” (32).  This guess is just that, and Crowther does not shy away from uncertainty regarding the man himself, pointing out that Mencken “was not only the man who contradicted everyone, but a man who personally embodied a galaxy of contradictions” (32).  One certainty is that Mencken was outrageously combative.  Yet he was “not a man of actions but a man of words” (59), and it is Mencken’s skilful deployment of his arsenal—the American language—which is the focus of the “The Word at War”.  But it is perhaps the final chapter, “‘I Remain a Foreigner’”, where the hazmat suits prove most necessary.  Crowther boldly addresses the numerous prejudices Mencken espoused in his work, but points out Mencken was a “full-service misanthrope” (64), in that he arguably vilified every race, religion and ethnic group. 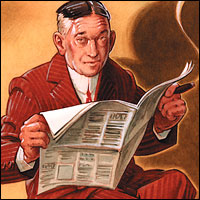 Illustration by Douglas B. Jones

Crowther’s determination to provide an unflinching examination of this “Infuriating American” allows for what is perhaps this book’s greatest strength.  In embracing the paradoxical nature of both man and work, and utilising the extensive existing scholarship, Crowther provides a detailed discussion which cements Mencken’s continuing relevance.  In every chapter, the work of a man “born in the age of the horse and buggy, who lived into the age of hydrogen bombs and nuclear disarmament” (32) is positioned in relation to contemporary America.  The consistent context of the present day culminates in the “Recessional”, where the age of mass-media is contrasted sharply with that of the typewriter.  Framed using Daniel Raeburn’s assertion that Henry Louis Mencken was both “the greatest American journalist of the last century” and “also an asshole” (71), this concluding discussion gives credit to Mencken’s immeasurably powerful influence without ignoring his controversy.  This book is not a rose-tinted ode to an idol, nor is it a Mencken-esque skewering.  Instead, it acknowledges the complexities of the man and his work and its contribution to a culture which remains just as complex.

Rachael Alexander recently completed her PhD project, ‘Imagined Women: Nationalism, Consumerism, and Gender in the Ladies’ Home Journal and Canadian Home Journal of the 1920s’. Her current research interests include twentieth-century American and Canadian magazines, periodical networks, and wider media ecologies. She teaches in the English Department at the University of Strathclyde, Glasgow, and was previously the BAAS Postgraduate Representative.
View all posts by Rachael Alexander →
Tagged  20th century history, C20, contemp, Literature.
Bookmark the permalink.