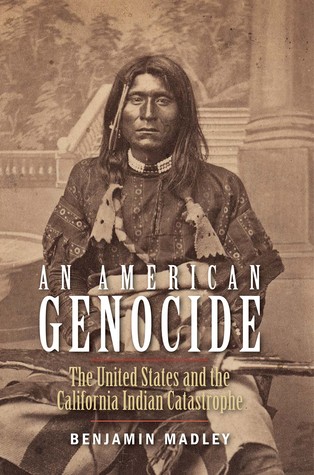 Benjamin Madley, currently Associate Professor of History at the University of California, Los Angeles, has published articles about genocide and Native American history in The Western Historical Quarterly, The American Historical Review, the Pacific Historical Review, and the Journal of Genocide Research. An American Genocide analyses the devastating demographic decline of California Indians. California’s Native American population declined from about 150,000 people to 30,000 in the period 1846-1873. He draws heavily on the 1948 United Nations Convention on the Prevention and Punishment of Genocide. As he explains, this convention provides a powerful analytical tool to help scholars explain what happened to California’s indigenous people. This book provides ‘the first year-by-year recounting of genocide in California under US rule between 1846 and 1873’ (8). Throughout the volume, he utilizes four kinds of evidence: perpetrators’ assertions and admissions, bystanders’ reports, victims’ testimonies, and forensic evidence. Furthermore, he divides killings into four categories: battles, massacres, homicides, and executions.

Madley begins with an extensive discussion of indigenous societies. ‘California on the eve of contact with Europeans,’ he observes, ‘was an exuberant clamor of Native American economies, languages, tribes, and individuals’ (18). He outlines the development of Spanish missions and California Indians’ resistance. After Mexican independence in 1821, authorities ‘emancipated mission Indians’ although many indigenous people ‘found themselves bound into new forms of unfree labor’ (37). In other words, violence and oppression did not begin in 1846. That said, life in California changed dramatically after the outbreak of the U.S. War with Mexico. On March 30, 1846, men under the command of John C. Frémont massacred an unknown number of Wintus. As Madley notes, ‘encirclement, surprise attack, an initial barrage of long-range small-arms fire, close-range attack, and executionary noncombat killing would become a kind of unwritten tactical doctrine in California Indian-haunting campaigns’ (47). Massacres began to occur with alarming frequency because many settlers saw indigenous people as subhuman.

In the immediate aftermath of the Treaty of Guadalupe-Hidalgo, ‘the vanguard of gold seekers who mined during the first half of 1848 had few reasons to attack California Indians’ (73). Indeed, some people in California became dependent on Indian workers. However, as more and more settlers flooded into the area, violence occurred with greater frequency. Madley contends that the propensity of Oregonians ‘for systematically and indiscriminately murdering substantial numbers of indigenous civilians ultimately created a local genocide’ (74). Nevertheless, settler violence remained limited because of the lack of state involvement. Still, ‘when state and federal officials became involved, between December 1849 and May 1850, they catalyzed a far more widespread genocide’ (102). The new inhabitants of California began to see California Indians as a nearly indivisible corporate body and developed a collective-guilt argument. Settlers believed they could punish any group of indigenous people for transgressions, perceived or real, by other groups. In short, many settlers rejected the U.S. legal system where Indians were concerned. Madley perceptively notes that this attitude differed markedly from the vigilante culture of frontier California. Vigilantes might hang a white man for stealing a horse or committing other crimes, but they did not wipe out his family.  However, vigilantes did not discriminate between indigenous men, women, and children.

While vigilantes and army officials massacred indigenous people, civilian lawmakers stripped California Indians of legal power and rights. In addition, the U.S. Senate rejected a series of treaties the government made with California Indians, which was ‘a deceitful crime of vast proportions’ (168). The establishment of the militia facilitated the creation of a state-sponsored killing machine. Law enforcement officials took little action to protect Indians. In addition, army regulars had the ability to stop massacres, but usually did not exercise it. The U.S. Civil War set the killing machine in overdrive as the California Volunteers strove for total annihilation of California Indians. However, the killing machine halted after 1865 because it was ‘deprived of the government-supported soldiers who had carried out most of California’s Civil War-era killing campaigns’ (330). Madley concludes that the ‘legacy of the state’s genocidal past remains hidden in plain sight and raises awkward questions when brought into focus’ (348). In a story of pervasive violence by settlers, he also examines resistance by California Indians and the conclusion spends a significant amount of time on the Modoc War.

An American Genocideis an important book and both a scholarly and a popular audience should read it. At times, the book could have benefitted from a broader focus on politics. One wonders, for instance, as the Republican Party coalesced in the 1850s, whether they used violence against California Indians as a campaign issue. In any case, the book draws attention to a long-neglected aspect of early California history and forces readers to rethink assumptions about westward expansion, the Gold Rush, and U.S./Native American relations.