Book Review: America’s Deadliest Export: Democracy – The Truth About US Foreign Policy and Everything Else by William Blum 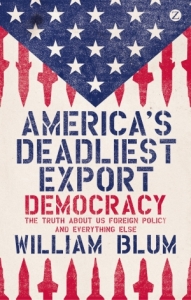 According to William Blum, the basic goal of United States foreign policy is ‘to prevent the rise of any society that might serve as a successful example of an alternative to the capitalist model’ (214). He explains US attempts to address such opposition as, ‘if you went into surgery to correct a knee problem and the surgeon mistakenly amputated your entire leg, what would you think if someone then asked: are you glad that you no longer have a knee problem?’(60). Consequently, when the US and US citizens are targets of hatred around the world, America reacts ‘very much like the children of a mafia boss who do not know what their father does for a living and don’t want to know, but then wonder why someone just threw a firebomb through the living room window’(10). 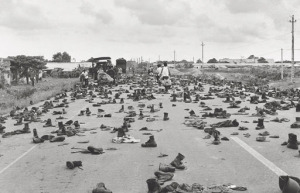 Blum’s book is a tirade against the United States and its foreign policy, not just on the macro level, but aimed at specific individuals, from presidents down to the soldiers carrying out the policies on the ground. Blum says this, his fourth book, is for his ‘choir’, his established followers; however the book has a broader audience than just those already converted to his cause. It serves as an important counter balance to the mainstream and establishment line. It will also help inform those increasingly disillusioned with the official rhetoric of ‘freedom’ and ‘democracy’. For students of US foreign policy the information, though bristling and startling, will no longer come as a surprise, but as a source of discussion and ideas.

Blum, a prominent public intellectual of the Madison school tradition, has created here an accessible overview that can serve as an introduction to the more heavily researched and focused revisionist tomes.[1] As a political activist and observer, Blum, like Noam Chomsky and Naomi Klein, is an important commentator in bridging the gap between academia and popular debate. He rejects the post-revisionism of John Lewis Gaddis, placing responsibility for the Cold War squarely on the shoulders of the United States.[2] In fact, Blum unequivocally states that the Cold War was a ‘struggle between the United States and the Third World’ (199).[3] 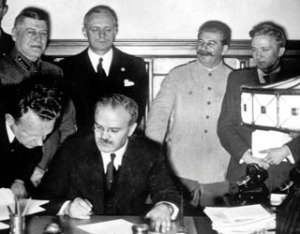 The signing of the Ribbentrop Pact, 1939. Blum suggests the Soviet Union signed this document out of fear of abandonment by their Western allies. (image: US Estonian embassy)

Focussing on the history of America’s global interventions in the last 65 years, Blum shows how incredibly relevant it all remains today. ‘The magnitude of US aggression puts it historically into a league all by itself’ and this foreign policy of aggression transcends the epochs of the Twentieth Century; no matter what era, the US was on the advance (3). Indeed, he draws on Nazi Germany on numerous occasions, and even dabbles in Roman history to contextualise the sheer scale of United States presence and power throughout the world. The attention given to the WWII era and the pre-War Soviet Union is deliberate in connecting that history to the preface of the book. Essentially, Blum argues that in 2014 Russian President Vladimir Putin, like Stalin in 1939, was not pursuing aggressive foreign policy, but reacting to bellicose US strategy. Blum notes that the US, France, and Britain were keen to direct Nazi aggression eastward, and explains that Stalin primarily signed the 1939 Molotov–Ribbentrop Pact out of fear of being abandoned by the Western allies. In turn, Blum suggests that it was communism/socialism the western democracies really feared, not fascism (203-205). Both Stalin and Putin, to an extent at least, had their hands forced; in 1939 by the Western allies refusing to sign a defence pact with the Soviet Union, and in 2014, by US-led NATO covert and overt political activity in Eastern Europe to destabilise the Russian border areas (viii-xi). This example deconstructs the chronological constraints of the Cold War, showing US foreign policy is still actively interfering in the traditional Russian sphere of influence. Furthermore, it demonstrates Blum’s commitment to showing that these fundamentals of US foreign policy were evident in their actions before 1947 and after 1989. 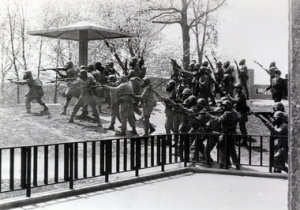 As is the revisionist position, Blum believes that domestic issues are primary drivers of the development of foreign policy. The discord between the Government and anti-Vietnam War protesters resulted in the National Guard opening fire on Kent State University demonstrators, resulting in four fatalities. (Image: Cleveland.com)

True to his revisionist position, Blum perceives United States foreign policy as primarily influenced by domestic issues; from politics, to the media, individual personnel, international interventions, ideology and morals, religion, and resistance. Blum pulls no punches, sustaining a scathing critique of US foreign policy, and how the US government has succeeded in justifying and gaining support for these policies by permeating every aspect of American life with propaganda. The net result, Blum claims, is the entrapment of most Americans in the myth that US foreign policy ‘means well’ (31). A typically emotive example raised by Blum is one regarding the definition of terrorism. If a terrorist is broadly defined as one who engages in extremist behaviour directly against those who are not connected to them at all, surely then, Blum asserts, American soldiers, willing to go to the other side of the world to wage asymmetrical war against people who have not harmed them is ‘extremist behaviour?’(28). It is these sorts of suggestions that will generate criticism from conservative factions in US society, and may prevent the necessary and sensible discussion that this book demands.

Blum takes history, frames it within current affairs, connects the then with the now, and as a result makes a strong argument that US foreign policy motives and ideology transcend epochs. He shows that we have been, and are now still living in, an era of expansionist and interventionist US foreign policy. What happened during the Cold War is not a case of that-was-then—old news. By assembling new and some previously published material, Blum argues that the consequences of American interventions over the last 65 years are impacting policy today, and that the same mistakes are being made by successive administrations in the post-Cold War era, as were being made during that epoch. Communism, nationalism, socialism, terrorism, Islam, activists, whether fifty years ago or today, at home or abroad, to Blum, all fall under one category: ODE, officially designated enemies of the US government (123).

This book must be considered a whistle-stop tour of a huge range of issues for students of history, foreign policy, political biography, the developing world, post-colonial studies, and international relations. It is a brief survey that explains 65 years of active exportation of American policy that is sold as ‘democracy’, and manifests itself in an ‘imperialistic’ form of economic, political, social, and cultural intervention and dominance. Resistance results in repeated assault and attempts to ‘destabilise’ dissidents to a point where they adhere to the US system, or are driven into failed state status (337).[4] It is a highly compelling and provocative story that students of foreign policy must be made aware of and consider as they explore more scholarly research on these areas.

[1] During the late 1950s and 1960s William Appleman Williams was based at the University of Madison-Wisconsin. His seminal work, Tragedy of American Diplomacy (New York, 1959) re-evaluated interpretations of the Cold War, which developed into the revisionist school.

[4] Cuba, Nicaragua, and Gaza are just three of the key examples discussed in the book.

Review: 'Indigenous Mobilities: Travellers through the Heart(s) of Empire,' Beyond the Spectacle (On...
Review: The US and Us: American History in Britain in the Twenty-First Century
Book Review: The Tea Party Divided : The Hidden Diversity of a Maturing Movement by Heath Brown
Review of "The Market Logics of Contemporary Fiction" by Paul Crosthwaite
Review: ‘Land and Water: Port Towns, Maritime Connections, and Oceanic Spaces of the Early Modern At...
Book Review: Philosophy for Spiders: On the Low Theory of Kathy Acker by McKenzie Wark
Review: SSAWW 2015 Conference: 'Liminal Spaces, Hybrid Lives'
Book Review: South Side Girls: Growing Up in the Great Migration by Marcia Chatelain

Ben Walker is a doctoral candidate in history, at the University of Manchester, due to submit summer 2015. The working title of his thesis is 'Demanding Dictatorship: US-Philippine Relations 1946-1969'. The project broadly speaking is an assessment of US foreign policy in the Philippines, and how this can help explain US policy failure elsewhere in the developing world, especially in the Vietnam War. Ben has also conducted research at NARA, the LBJ Presidential Library, and the Hoover Institute.
View all posts by Ben Walker →
Tagged  C20, C21, Foreign Policy, Politics, Presidents.
Bookmark the permalink.